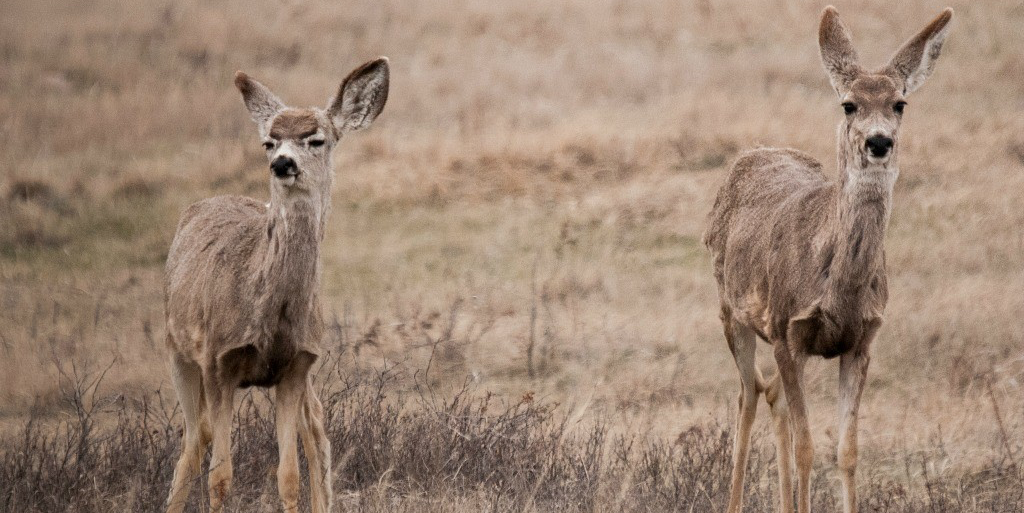 An $11.6-million project to curb deadly chronic wasting disease in deer and other large game is one of three research collaborations funded by Genome Canada. (Photo: Janet Ng)

By HELEN METELLA and JENNIFER PASCOE

Albertans know from experience that chronic wasting disease, pipeline degradation and pests that attack trees due to changes in climate are problems that exert major impact on all of our lives.

So researchers from different faculties across the University of Alberta will use the funding awarded to them today by Genome Canada to find responsive answers to those problems.

“The success of this university, or any university, rests on the quality of its researchers,” said Lorne Babiuk, vice-president (research). “This Genome Canada grant demonstrates how fundamental research can help drive significant activity, outcomes and benefits. It also shows the value and effectiveness of cross-institutional collaboration to address major societal changes.”

For Debbie McKenzie, associate professor in the Department of Biological Sciences, tackling the role of chronic wasting disease (CWD) affecting cervids as food sources means that she and her team can potentially wipe out this slowly progressing, brain-destroying fatal disease.

Similar to other prion diseases including bovine spongiform encephalopathy (also known as “mad cow disease”) and the human form (Creutzfeldt-Jakob disease), CWD persistently accumulates in the environment with untold negative ramifications on our ecology. There is no known cure and no existing vaccine.

“If the spread is not managed, we could be looking at upwards of a 45 per cent mortality rate in wild deer,” says McKenzie, whose team will look at the effects of CWD on other large game including elk, moose, bighorn sheep and the notoriously social caribou. “The good news is that, with novel genomic and metabolomic approaches, we have the opportunity to develop an early detection and rapid response system to reduce spread-risk in Canada.”

To date, CWD affects animals in not only Alberta and Saskatchewan (with the adjacent British Columbia, Manitoba, and the Yukon at higher risk) but also 24 American states. The first European case was reported earlier in 2016.

McKenzie’s team anticipates that, by 2025, improved policies and management will reduce the level of CWD such that cervid species sustain those who depend on them for food and income without risking their health, retaining their iconic status in Canada for future generations.

The Systems Biology and Molecular Ecology of Chronic Wasting Disease project was awarded $11.6 million from Genome Canada. The researchers include Judd Aiken, Paul Stothard and Ellen Goddard from the Faculty of Agricultural, Life and Environmental Sciences; David Westaway, Holger Wille and Valerie Sim in the Faculty of Medicine & Dentistry; and David Wishart (as co-principal investigator), David Coltman and Evelyn Merrill from the Faculty of Science at the U of A, as well Hermann Schaetzl and Sabine Gilch in the Faculty of Veterinary Medicine at the University of Calgary.

When a pipeline corrodes there are methods to manage the failure, but the activity of microbes such as bacteria and fungi causes about 20 per cent of corrosion in metal infrastructure. Yet it’s the most poorly understood form of corrosion, says John Wolodko, an associate professor in the Department of Renewable Resources in the Faculty of Agricultural, Life and Environmental Sciences. His four-year study—Managing Microbial Corrosion in Canadian Offshore and Onshore Oil Production—is meant to improve pipeline integrity.

It aims to do so by pinpointing exactly how specific genera of bacteria feed on nutrients found in waters and soils to modify the local chemistry and render it more corrosive to metal.

“To some degree it is akin to a cancer diagnosis and treatment in the medical field,” said Wolodko, the Alberta Innovates – Technology Futures Strategic Chair in Bio and Industrial Materials. “While there is significant knowledge and best practices in diagnosing and treating cancer, it is still not completely understood, and significant research is still required to further eliminate its impact to society.”

Microbial corrosion is estimated to cost the oil and gas industry $3 billion to $7 billion annually in maintenance, repairs and replacement. It also attacks other infrastructure globally (bridges, culverts, tanks, ships) to the tune of $2.5 trillion. Using modern genomics techniques, the researchers will be able to better characterize the microbial communities that cause corrosion, then develop predictive models and tools to prevent the problem.

Wolodko’s project, funded by Genome Canada with a $7.8-million grant, is co-led by Lisa Gieg in the Department of Biological Sciences at the University of Calgary and Faisal Kahn in the Faculty of Engineering at Memorial University.

Like the analysis of microbial degradation, genomics will also influence the work of Barb Thomas and Nadir Erbilgin. These two researchers in the Faculty of Agricultural, Life and Environmental Sciences are working with scientists at the University of British Columbia to build a better tree—one better resistant to pests and drought, which will have improved wood quality and shorten the time of the tree-breeding cycle from 30 approximate years to 10.

“The research being undertaken in the Resilient-Forests Genome Canada project is poised to put into practice the benefits of combining genomic technologies with traditional tree improvement to reduce the time from selection to deployment of improved stock,” said Thomas, who, like Erbilgin, is based in the Department of Renewable Resources.

“Active white spruce and lodgepole pine tree improvement programs will be the focus of study and assessment will be done through measures of growth, physiology, wood quality, metabolomics and chemical responses.

In addition, she said, “economic benefits and social acceptance of these new technologies will also be studied and used to help inform policy-makers on changes required for full implementation and technology adoption.”

The Resilient-Forests Genome Canada project will see $6.6 million in funding from Genome Canada, and Thomas and Erbilgin will work closely with Yousry El-Kassaby in the Faculty of Forestry at the University of British Columbia.