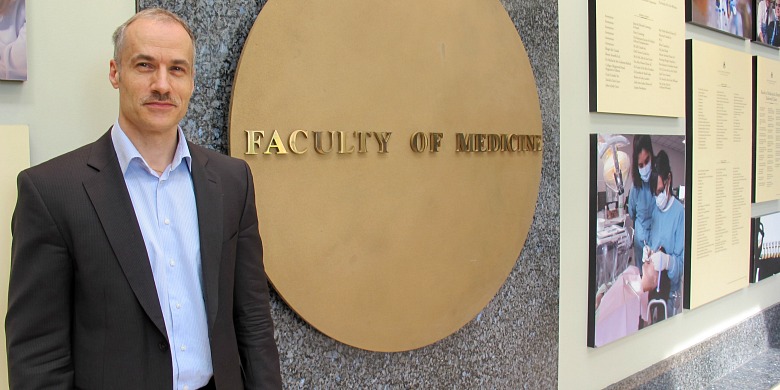 130523-michael-zaugg-banner
Michael Zaugg is part of a team of UAlberta researchers whose cardiac study was used as a source for new treatment guidelines by the American College of Cardiology and the American Heart Association.

(Edmonton) Cardiac research from the University of Alberta had serious impact as a source for the American College of Cardiology and the American Heart Association’s new guidelines on how to treat patients undergoing coronary artery bypass graft surgery.

Michael Zaugg, Eliana Lucchinetti and Barry Finegan with the U of A’s Faculty of Medicine & Dentistry have shown that a new treatment done with patients just before surgery may not be as beneficial as once thought.

Previous research has shown that volatile anesthetics, when paired with an opiate as sedation for surgery, are extremely protective of the heart because they activate the organ’s own protection mechanisms. Just recently, a new treatment was added to the list, which sees physicians put a blood-pressure cuff around the leg or arm to restrict blood flow in the area, allowing a number of molecules to accumulate in the area. When the cuff is released, those agents get into the bloodstream and move to the heart, where they induce protection. This process is called remote ischemic preconditioning.

“I think there is significant interference between these treatments, and it doesn’t really help to add more,” said Zaugg. “It may also have some side-effects because these people sometimes already have problems with perfusion [lack of blood flow] of their legs, so it may cause damage too.”

For the study, the researchers collected cardiac tissue samples at the Mazankowski Alberta Heart Institute. Zaugg and Lucchinetti measured the gene expression of the entire patient’s genome, and also measured biomarkers that are important in cardiac function and the inflammatory response. The study was published in the journal Anesthesiology in 2012.

The American College of Cardiology and the American Heart Association used this study, along with Zaugg’s previous work and others’ research, to help develop guidelines for treatment.

“We are proud to be part of these endeavours and we contributed significantly to the release of the guidelines,” said Zaugg. “We had a lot of great feedback for this work.”

His work will now focus on how volatile anesthetics affect or interfere with stem cells in the heart.

Zaugg and Lucchinetti’s work was funded by the University of Alberta Hospital Foundation, and by grants from the Mazankowski Alberta Heart Institute and the Swiss National Science Foundation.