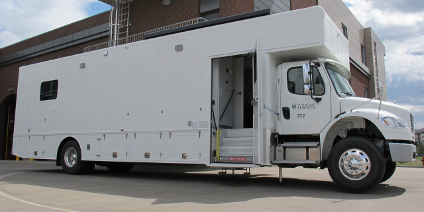 The mobile lab—essentially a 30-foot-long RV specially equipped for research—will be available to U of A scientists to take their work on the road. (Supplied photo) 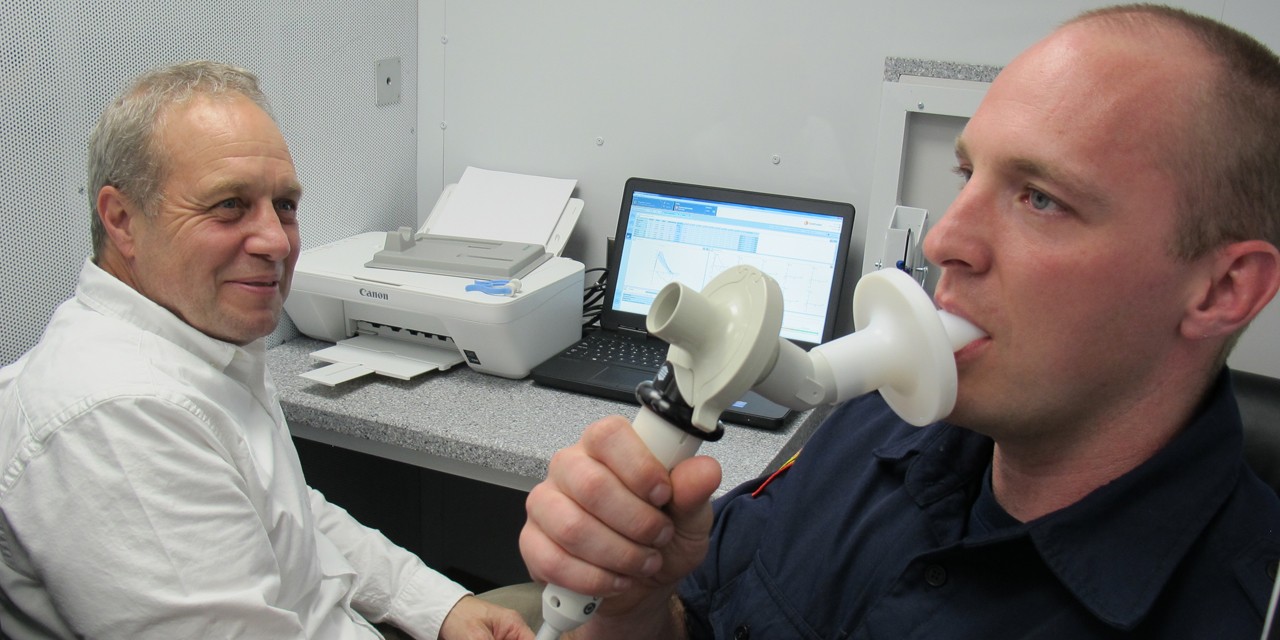 The U of A initially took a one-of-a-kind mobile lab in the spring of 2016 for a pre-launch test-run for a study examining the lung health of firefighters returning from the Fort McMurray fire. (Supplied photo)

A one-of-a-kind mobile laboratory at the University of Alberta is broadening fieldwork opportunities for researchers and providing them with a tool to better access hard-to-reach populations.

The mobile lab—essentially a 30-foot-long RV specially equipped for research—will be available to U of A scientists to take their work on the road. The aim is to fill in demographic gaps that come with the vast majority of research that typically takes place in large urban centres.

“In medical trials, we know there are huge biases in the people who come in for them,” said Adrian Wagg, divisional director of Geriatric Medicine at the U of A and one of three collaborators who led the project to purchase the mobile lab. “(Participants) are largely from urban centres, they are more fit, less sick, are younger people and are often white. We don’t get the elderly, people in remote communities and Indigenous populations who are representative of the Canadian population.

“If we can’t get (certain populations) to come in, going out to them may make things much easier.”

According to Wagg, the quality of research made possible by the mobile laboratory will be greatly enhanced through its custom-built capabilities. Built at a cost of $500,000, the lab offers a standardized testing environment that can travel throughout the province and beyond with few limits. The lab-on-wheels includes a soundproof clinical examination room, two interview rooms, a freezer for blood samples, research equipment, a washroom and space for passengers.

While the lab is now available for widespread use, the U of A initially took control of it in the spring of 2016 at the outbreak of the Fort McMurray wildfires. Nicola Cherry, an epidemiologist and professor of preventive medicine at the U of A, took the vehicle on a pre-launch test-run for a study examining the lung health of firefighters. As part of the effort, she parked the mobile lab at fire halls to test firefighters as they returned from fighting the blaze.

“It was hijacked by Dr. Cherry,” said Wagg with a laugh. “It was good to actually see that the mobile lab works and performs well.”

Wagg’s hope is that the lab-on-wheels will see heavy use over the coming months. It is available to all U of A researchers at a cost of $150 a day. It’s already booked for two research projects in the field of occupational health.

“The mobile research laboratory has such great potential,” said Wagg. “We’d like to see it used as often as possible.”

The mobile research laboratory was supported through a private donation from the Muhlenfeld family and matching funds from the Canada Foundation for Innovation.