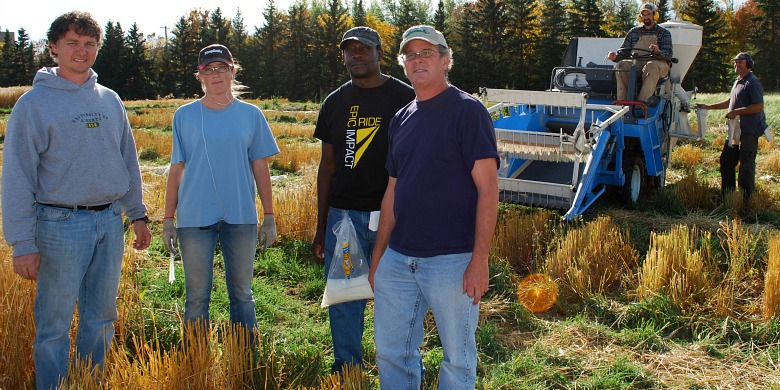 (Edmonton) Prairie farmers will have new options for growing top-quality wheat in the coming years as two new varieties, successfully developed by the University of Alberta’s wheat breeding program, were recently approved by the federally regulated Prairie Grain Development Committee.

Dean Spaner, a researcher in the Department of Agricultural, Food and Nutritional Science, and his research group developed BW947 and PT765, two high-yielding Canada Western Red Spring (CWRS) wheat lines with good resistance to stripe rust, a serious new disease affecting wheat crops in Western Canada, especially Alberta. PT765 also has improved resistance to Fusarium head blight, a disease of consequence for animal and human health in the harvested grain. Both lines mature early, a significant characteristic for wheat growing in Alberta, especially north of Red Deer where the growing season is shorter.

“We only have 99 days in our growing season in Alberta. Early maturity means you can harvest faster, and you have less downgrading of the crop, less frost damage and less pre-harvest sprouting,” Spaner explains.

CWRS is one of the highest-quality types of wheat in the world because of its high protein content, the size of its kernel and the ability of its dough to rise. It is often used to supplement lower-quality grains of wheat in industrial purposes. To be approved for registration, CWRS wheat must pass extremely stringent bread-making quality tests over a number of years.

The registration of the two new lines is a breakthrough for the U of A’s wheat breeding program. The two lines are the first developed in Alberta and approved for release since 1997, when U of A wheat breeder Keith Briggs developed Alikat. Previously, the U of A had developed and released three varieties since the inception of what is now the Faculty of Agricultural, Life and Environmental Sciences in 1915.

Canada has one of the world’s most stringent regulatory systems when it comes to releasing wheat varieties. It takes between eight and 12 years to develop a wheat cultivar. It must be field tested in roughly 50 environments over five years and tested for many agronomic traits, including yield and maturity, as well as disease resistance and quality traits.

With funding from the Alberta Crop Industry Development Fund and the Western Grains Research Foundation as supported by the wheat producers of Western Canada, Spaner and his team developed the varieties between 2004 and 2007 and field-tested them in 52 environments between 2007 and 2012.

The lines are in the process of being commercialized and will likely be made available to prairie farmers in two to three years.