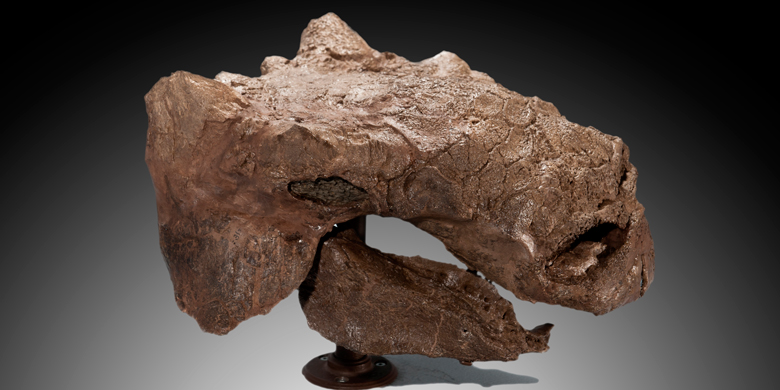 130509-arbour-ankylosaur-banner
This ankylosaur skull, part of the vast collection of dinosaur fossils in U of A Museums, was key to Victoria Arbour's breakthrough research. (Photo: Richard Siemens)

(Edmonton) Just when dinosaur researchers thought they had a thorough knowledge of ankylosaurs, a family of squat, armour-plated plant-eaters, along comes University of Alberta graduate student Victoria Arbour.

Arbour visited dinosaur fossil collections from Alberta to the U.K., examining skull armour and comparing those head details with other features of the fossilized ankylosaur remains. She made a breakthrough that resurrected research done more than 70 years ago.

Arbour explains that between 1900 and 1930, researchers had determined that small variations in the skull armour and the tail clubs in some ankylosaurs constituted four individual species of the dinosaurs.

“In the 1970s the earlier work was discarded and those four species were lumped into one species called Euoplocephalus,” said Arbour.

“I examined many fossils and found I could group some fossils together because their skull armour corresponded with a particular shape of their tail club,” said Arbour.

Finding common features in fossils that come from the same geologic time is evidence that the original researchers were right, says Arbour. "There were in fact four different species represented by what scientists previously thought was only one species, Euoplocephalus."

The four species span a period of about 10 million years. Arbour’s research shows that three of those ankylosaur species lived at the same time in what is now Dinosaur Provincial Park in southern Alberta.

Arbour says this opens the door to new questions.

“How did these three species share their habitat? How did they divide food resources and manage to survive?”

Arbour will also look into how slight differences in skull ornamentation and tail shape between the species influenced the animals’ long reign on Earth.

Arbour credits the U of A’s vast dinosaur fossil collection with helping to advance her research.

“One of the most important specimens was a Euoplocephalus skull in the university’s Laboratory for Vertebrate Paleontology,” she said. “Studying here has also given me the opportunity to do paleontology fieldwork in Alberta, Mongolia and Argentina.”

Arbour’s research was published May 8 in the journal PLOS ONE.

Want to learn more about dinosaurs?