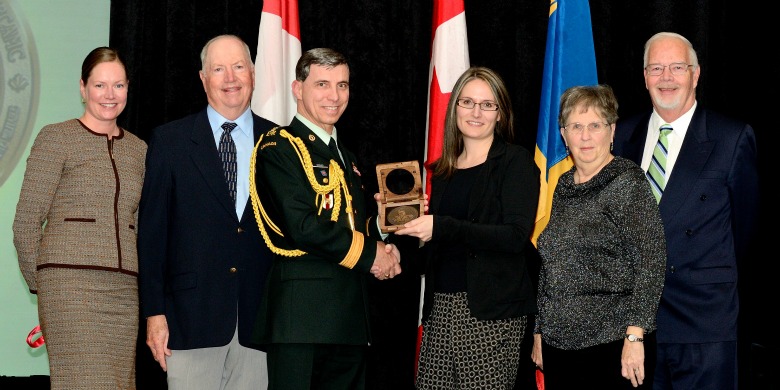 (Edmonton) A University of Alberta researcher’s efforts to improve the lives of military personnel, veterans and amputees at home and abroad have been recognized with one of the Canadian Forces’ highest honours for health research.

Jacqueline Hebert, Associate Research Chair in Clinical Rehabilitation at the U of A, is the recipient of the 2012 Major Sir Frederick Banting Award for Military Health Research. The honour is given to the Canadian whose research presentation at the Canadian Military and Veteran Health Research Forum is “deemed to be of the greatest overall value to military health” as judged by Canada’s Surgeon General, Brig.-Gen. Jean-Robert Bernier, who presented the award Nov. 28.

“It’s quite an honour to have received the medal from the Surgeon General on behalf of the Canadian Forces, particularly for the fact this research has been recognized for advancing military and veterans’ health,” said Hebert, an associate professor in the Faculty of Medicine & Dentistry whose research chair is attached to the Faculty of Rehabilitation Medicine.

“There is a broad research need in the Canadian Forces for veterans and serving members, and this is a validation of some of the work we’ve been doing here in Edmonton for the last few years.”

Sponsored by True Patriot Love, the Banting award is named after the renowned Canadian physician and researcher who received the Nobel Prize in medicine for his co-discovery of insulin.

The award recognized Hebert’s work in advancing prosthetic limb development, both at the U of A and through her role as medical lead of the Adult Amputee Program at the Glenrose Rehabilitation Hospital. Her team has pioneered targeted sensory reinnervation surgery—a technique and sensory feedback system that aims to give an amputee a degree of sensation in their prosthetic limb.

“What we’re trying to do, basically, is make bionic limbs that can feel,” Hebert explained, noting that despite recent technological advances, upper-limb prostheses are non-intuitive, hard to control and lacking in sensory feedback.

“Not only will they be able to use their prosthesis to feel things, but they can also start to reintegrate the device into their body image and feel like it’s a piece of them, not just a mechanical device that’s attached to them.”

Hebert’s team has performed the procedure on one patient and, with the aid of a robotic arm, demonstrated his ability to perform functional tasks while blindfolded and wearing headphones. The next step involves performing the technique on additional subjects and integrating sensory feedback into a prosthetic device, which will happen over the next four years in collaboration with Paul Marasco at the Stokes Cleveland Department of Veterans Affairs Medical Center in Ohio.

Hebert said her research and recognition like the Banting award would not have been possible without the collaboration and support of the Division of Physical Medicine and Rehabilitation, the Department of Mechanical Engineering, the Glenrose, and her research chair position, which gave her the time to actually pursue the work.

“Without those areas of support across the university and the Glenrose, this would have been extremely difficult to accomplish,” she said. “These projects can only get done with interdisciplinary collaboration; they can’t be done in silos.”