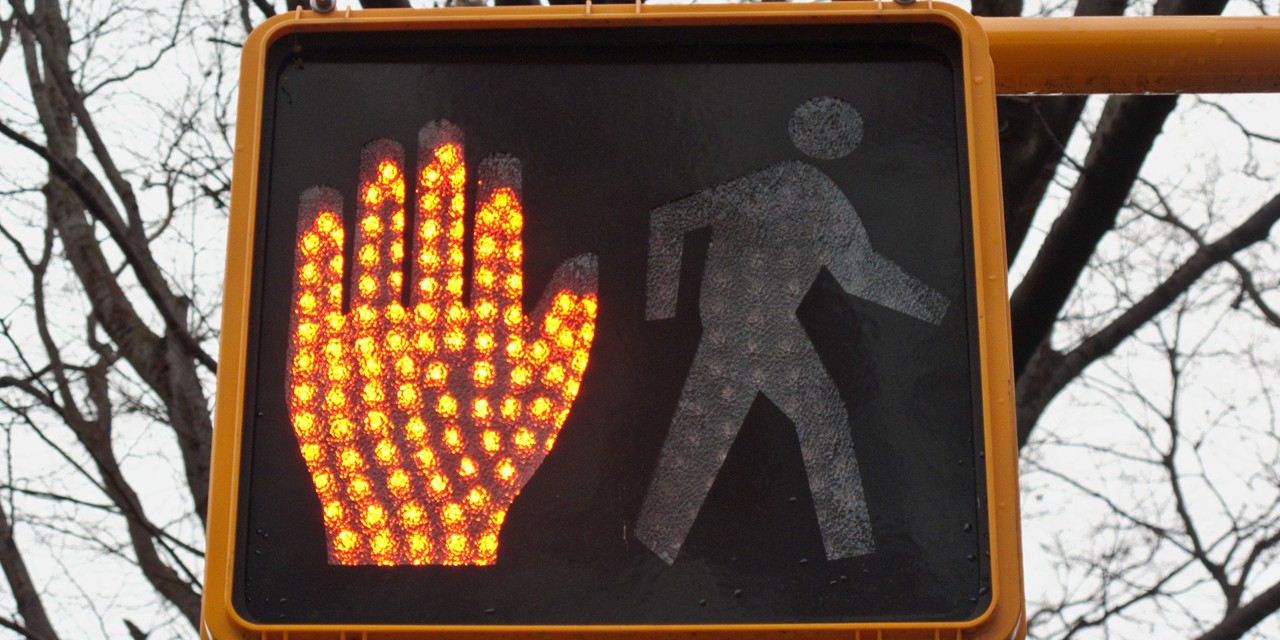 Researchers at the U of A’s City-Region Studies Centre are rating the walkability of the city core through crowd-sourced data with the goal of creating a walking app to be used by people to better navigate their cities on foot. (Wikimedia Commons)

If it seems like forever before that crosswalk light changes . . . you’re right.

Timed lights that vary from one corner to another are just one of the quirks uncovered by a pair of University of Alberta researchers as they work to make downtown Edmonton more walkable.

Rob Shields and Nathalia Osorio of the U of A’s City-Region Studies Centre are rating the walkability of the city core through crowd-sourced data, with the goal of creating a mobile ‘companion walking app’ that ultimately can be used by people to navigate their cities on foot.

“We have no data about crosswalks and pedways—everything is in its infancy,” said Shields, a U of A sociology professor who studies space and culture. “Most information gathered is all about cars.”

Slow crossing lights, sidewalks that suddenly peter out or are closed, lack of streetlights and other niggling missteps in infrastructure make walking a chore for many people, he said.

“We want to level the playing field a bit by documenting pedestrian needs; we think the pedestrian’s right to equal treatment is an underserved aspect of municipal life in terms of services, planning and operations. Our work is asking why there is such a one-sided approach.”

The pilot project, based out of the U of A’s Faculty of Extension, is building an app that people could easily access from their personal mobile devices to lodge complaints, take pictures, report and express their opinion by rating each one of the walking paths of the city.

“By doing that, they can help other people have better experiences at walking, and we can get the information we need as researchers to identify the main issues and push the city to improve urban spaces for people,” said Osorio, adding that they hope the app will also serve as a platform that gives solid data to urban planners—in Edmonton and beyond—on walkability issues. The researchers plan to meet with city planners when their project data is complete. In the meantime, they’ve been looking at Edmonton’s winter city vision, which addresses walkability, to see how it streamlines with their own work.

The information about where and how long people start and stop would also be of use to urban partners like shopping mall retailers, Shields believes.

As part of the project, the pair have been analyzing comparative feedback sent to them by downtown pedestrians in Edmonton and from walks they took themselves while visiting Vancouver and Ottawa, all using a fitness GPS tracker to record the outings.

Those on-the-ground experiences are giving a clear idea of what people would want from an app and what features they’d find most useful.

The wish list includes an app that shows which sidewalks on their routes are closed, especially during construction season.

“People would like to have a map that shows them how the situation is in real time to save them time and frustration, so they don’t have to change plans at the last moment,” Osorio said.

An app that would match walkers with their interests was also suggested. “For instance, if they wanted a scenic route but didn’t know which areas were best for pleasant landscapes or public art, they’d like the app to tell them where to walk.” They also wanted an app to suggest the most direct route if they were in a hurry.

Other ideas were for apps that could find events like festivals with photo/video reports from people on scene, which areas to avoid as unsafe, and a map with displays scaled to pedestrians instead of vehicles.

They surveyed pedestrians about comfort, connectivity, accessibility, safety and security of the routes they walk and using that information, Osorio developed a series of maps for each of the three major cities that detail features like the time per kilometre of each route, the average walking speed and the percentage of the total time that people spent walking and waiting.

The Edmonton maps are sussing out problem areas. Because the project is still young, most of the feedback from the small group of participants is concentrated on areas around the U of A’s main campus and the downtown, so no conclusions can yet be made city-wide. But early findings are showing some details that could influence the walking app.

The project’s next step is to find partners—colleges with tech programs, planners and cities willing to have their downtown walkability mapped—so a research platform for the app can be fully developed.

Pedestrians are also still needed to cover ground for the research, Osorio said.

“This is a chance for people who are interested in being part of something new. They can help us by going for a walk downtown or by mapping their neighborhoods and designing routes that can be rated.”

What the project has accomplished to date is promising, and ultimately, a walking app would be a win-win situation for pedestrians and urban planners alike, Shields said.

“We want to give cities and citizens a tool that allows them to open up conversations about the pedestrian experience and we want cities to be able to market themselves on the quality of that experience.”