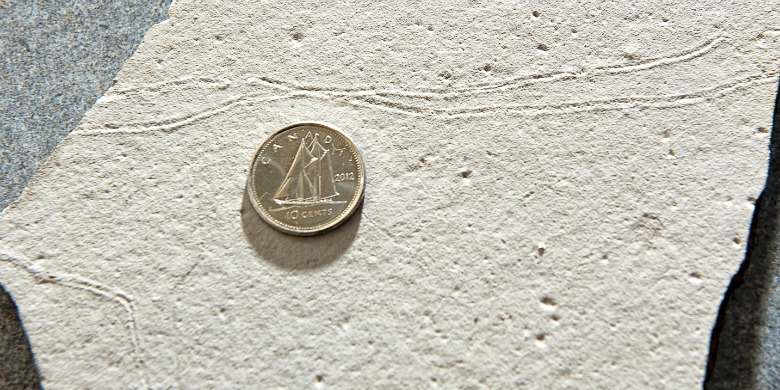 120628-bilateriantracks-banner
U of A geologists found these tracks of the earliest animal life form ever discovered. Bilaterians, centimetre-long slug-like animals, left their mark 585 million years ago in shallow-water silt in what is now Uruguay. The U of A find predates all previous evidence of "first" animal life on Earth by 30 million years. (Photo: Richard Siemens)

The discovery was made by U of A geologists Ernesto Pecoits and Natalie Aubet in Uruguay. They found fossilized tracks a centimetre-long, slug-like animal left behind 585 million years ago in silty, shallow-water sediment.

A team of U of A researchers determined that the tracks were made by a primitive animal called a bilaterian, which is distinguished from other non-animal, simple life forms by its symmetry—its top side is distinguishable from its bottom side—and a unique set of “footprints.”

U of A paleontologist Murray Gingras says fossilized tracks indicate that the soft-bodied animal’s musculature enabled it to move through the sediment on the shallow ocean floor. “The pattern of movement indicates an evolutionary adaptation to search for food, which would have been organic material in the sediment,” he said.

There were no fossilized remains of a bilaterian’s body, just its tracks. “Generally when we find tracks of a soft-bodied animal, it means there’s no trace of the body because they fossilize under different conditions,” said Gingras. “It’s usually just the body or just the tracks, not both.”

It took more than two years for the U of A team members to satisfy themselves and a peer review panel of scientists that they had the right age for the bilaterian fossils.

U of A geochronologist Larry Heaman was among a group that returned to Uruguay to collect more fossil samples locked in a layer of sandstone. Heaman says because the depositional age of the sandstone is difficult to determine, they focused their investigation on particles of granitic rock found invading the sandstone samples.

Heaman explains that the granitic rocks were put through the university’s mass spectrometry equipment, a process in which samples are bombarded by laser beams and the resulting atom- to molecule-sized particles are analyzed and dated.

Over the course of his U of A career, Heaman has taken part in a number of breakthrough research projects involving fossils. Last year he got the attention of the paleontology world when he confirmed the surprising date of a fossilized dinosaur bone found in New Mexico. Using U of A equipment, Heaman determined that the bone came from a sauropod, a plant-eating dinosaur that was alive some 700,000 years after the mass-extinction event that many believe wiped out all dinosaur life on Earth.

Heaman says the challenge in dating the bilaterian fossil makes it stand out from his other work. “This was the top research accomplishment because it has more direct relevance to the evolution of life as we know it,” he said. “It was such a team effort; any one of us on our own couldn’t have done this.”

Before the U of A bilaterian find, the oldest sign of animal life was dated at 555 million years ago, from a find made in Russia.

Kurt Konhauser, a U of A geomicrobiologist, says the team’s discovery will prompt new questions about the timing of animal evolution and the environmental conditions under which they evolved.

“This research was a huge interdisciplinary effort and shows the depth of the research capabilities here at the U of A,” said Konhauser. “The challenge brought the sciences of geology, paleontology, geomicrobiology and geochronology together to nail down the age of the fossils.”

Konhauser explains that in the past, research into the earliest signs of animal life would typically shift the date back by a few million years, but the U of A’s finding of 30 million years is a real breakthrough.