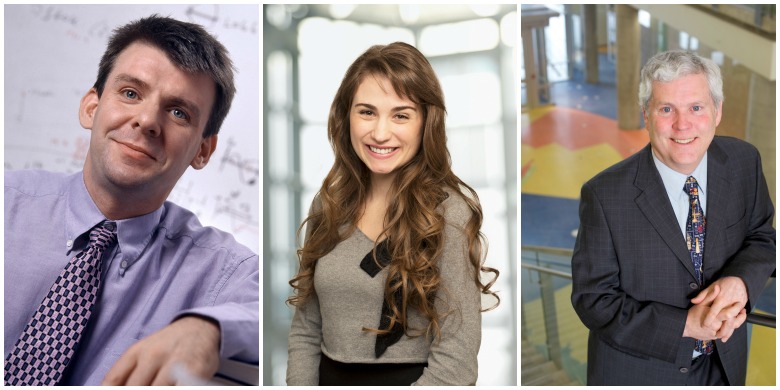 (Edmonton) A handful of talented University of Alberta researchers have been honoured for their vision and leadership by the Alberta Science and Technology Leadership (ASTech) Foundation.

The annual ASTech Awards were handed out Oct. 25 to cutting-edge scientists in 13 categories from all across the province, including three from the University of Alberta.

The ASTech Foundation, created in 1989, honours outstanding achievements in science and technology in Alberta. This is the 24th year that ASTech awards have been given.

The 2013 roster of winners from the U of A recognizes a leading former U of A dean, a stargazing network that can predict the Northern Lights, and a U of A Rhodes scholar.

This year’s winners include Gregory Taylor, for the ASTech 2013 Outstanding Contribution to the Alberta Science and Technology Community. As dean of science at the U of A from 2002 to 2012, and a current professor in the Department of Biological Sciences,Taylor was recognized for his dedication to strengthening the vibrant, interdisciplinary teaching and research that makes the U of A Faculty of Science a leader today. His vision also helped drive the creation of the Centennial Centre for Interdisciplinary Science, which is home to innovative cross-disciplinary research and discovery.

“I am really receiving this award on behalf of so many people who work tirelessly to promote interdisciplinary teaching and research in the Faculty of Science,” said Taylor. “I have had the pleasure of working with an extraordinary group of faculty and staff. This award is a reflection of their creativity and commitment.”

The ASTech 2013 Public Awareness Award went to the U of A’s Aurora Watch, led by principal researcher Ian Mann of the Department of Physics and put together with the help of a team of researchers and graduate students. The user-friendly project brings to the public the beauty of viewing the Northern Lights, through an email alert service that lets people know when the glowing light shows are most likely to happen. Aurora Watch has had 1.2 million individual visitors, and has 26,000 email subscribers and 2,000 followers on Twitter (@aurorawatch).

“We are delighted and honoured that the impact of AuroraWatch.ca in promoting space science and technology was recognized with this ASTech Award to the Aurora Watch team," said Mann, noting that space weather can also have more damaging consequences on the satellite, GPS and power grid infrastructure we increasingly rely on in the 21st century.

“Current U of A space research is focusing on understanding, forecasting and ultimately mitigating such space weather impacts, as well as contributing to generating future economic benefits from space research,” he said.

Rhodes Scholar Megan Engel, who studied physics at the U of A and has begun her PhD studies at Oxford University, is the recipient of the 2013 ASTech Leaders of Tomorrow Award. The award recognizes Engel’s ambitious research conducted at the U of A’s National Institute for Nanotechnology, where she studied the mysteries of folding proteins and nucleic acids that contribute to devastating brain disorders such as Parkinson’s and Alzheimer’s diseases. The award also recognizes Engel’s commitment to music and the arts in her quest to be a well-rounded academic.

The ASTech Foundation chose this year’s winners from a list of 23 nominees in various categories, including two outstanding innovators from the U of A.

Professor Dean Spaner of the Faculty of Agricultural, Life and Environmental Sciences was nominated for his years of painstaking, patient work in plant breeding, resulting in two new and improved strains of wheat.

Matthew Benesch, who holds a PhD and is studying for a medical degree from the Faculty of Medicine & Dentistry, was nominated for his desire to be a leader in the field of surgical oncology, and for his dedication as a campus volunteer.