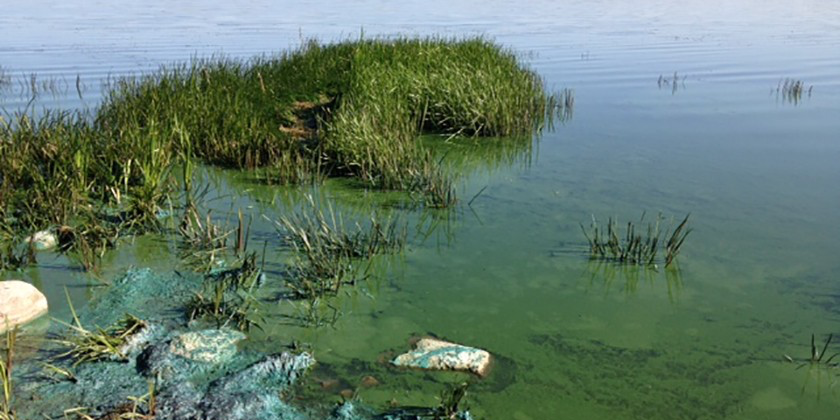 (Edmonton) As we approach the hottest days of summer, toxic algae are starting to bloom in lakes around the world. Increases in atmospheric temperature combined with land nutrients are promoting the growth of harmful cyanobacteria—blue-green algae—in these bodies of water. The bacterial blooms are damaging not only to freshwater ecosystems, but also potentially to the people who frequent the lakes for recreation.

The good news is that University of Alberta scientists have also been visiting the lakes, working to mitigate the risks to human health using advanced flow cytometry, a technique they developed and have been using for the past three years.

“Our ability to rapidly detect the onset of outbreaks of potentially toxic cyanobacteria provides timely information to the public regarding the major lakes throughout the province,” says Rolf Vinebrooke, professor in the Department of Biological Sciences. “If the cell counts exceed the World Health Organization guideline of 100,000 cells per millilitre, we notify Alberta Health officials, who then post advisories at the lake in question.”

Vinebrooke and his colleagues use a “FlowCAM” unit, manufactured by Fluid Imaging Technologies, for early detection of cyanobacteria in lakes. Their protocol is the first adaptation in North America of a protocol used by oceanographers to warn of potential shellfish poisoning produced by toxic marine algae. A sample of lake water is simply allowed to flow through the cytometer, which is equipped with imaging software that detects and measures more than 25 optical properties of each cell. At the same time, the software constructs a collage of all the images and then matches each with a known cyanobacterium using a searchable electronic library of more than 100 species, developed by research associate Mark Graham.

“The next step is to detect trends in our cyanobacterial-monitoring data as related to measured environmental conditions,” says Vinebrooke. “This will enable us to generate both predictive models for blue-green algal blooms and testable hypotheses regarding the as-yet unknown set of factors that cause these outbreaks in the first place.”

Vinebrooke recently collaborated with colleagues from McGill University to assess long-term worldwide trends in cyanobacterial growth. The scientists found that, as humans have altered the global climate over the past two centuries, there has been a disproportionate growth of blue-green algae relative to other phytoplankton, with particularly accelerated growth in the past 70 years.

“Excess inputs of nutrients into lakes combined with higher water temperatures due to climate warming appear to be two of the major causes for the outbreaks,” he says. “We recommend reducing the use of fertilizers and fossils fuels to help slow the global acceleration of this cyanobacterial dominance.” The findings were published in the journal Ecology Letters.

The U of A has been a leader in freshwater ecology since the late 1960s, beginning with the pioneering work of David Schindler at the Experimental Lakes Area in northwestern Ontario. Schindler generated whole-ecosystem evidence that showed phosphorus was promoting blue-green algae outbreaks in lakes. Several other U of A researchers have made key findings that have improved our understanding of the toxicity of freshwater cyanobacteria.