Danisha Bhaloo was once a shy kid with low self-confidence and poor grades. Today she’s living proof of the difference giving to the United Way can make. 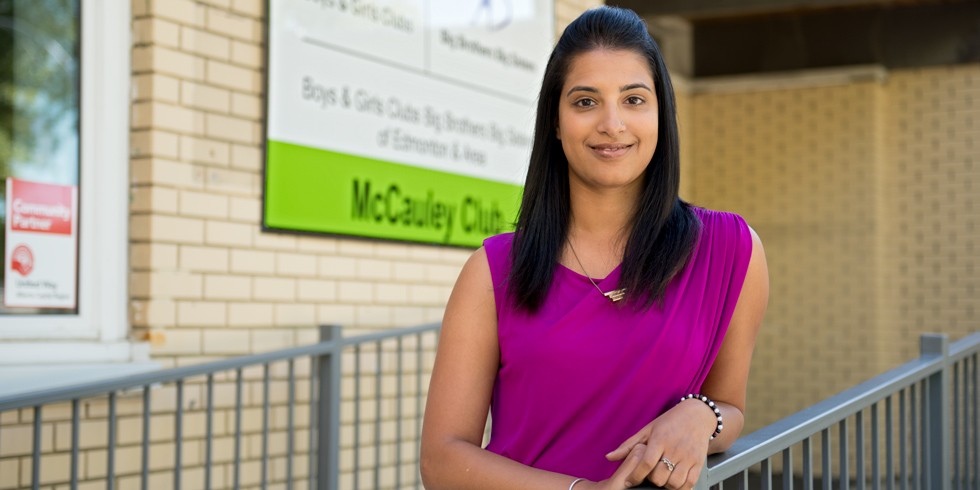 Danisha Bhaloo is a UAlberta alumna, a recent appointee to the university's senate and a grateful donor to the United Way. She hopes the campus community will think about the positive impact their generosity will make on young lives. (Photo: Richard Siemens)

(Edmonton) Twenty years ago, Danisha Bhaloo was a shy kid grappling with low self-confidence, poor grades and a heavy heart.

Bullied by classmates and aching from her parents’ separation, the little girl felt as though everything was topsy-turvy as she, her younger sister and their mom worked to make a new life for themselves. Moving around, switching to three different schools in as many years, and then dealing with the sudden death of her father all took an emotional toll.

“There were a lot of challenges, and I was feeling bad about life.”

That began to change when Bhaloo’s mother, working 17-hour days to pay the bills, enrolled her daughters in the Big Brothers Big Sisters mentoring program for some extra companionship. Bhaloo had no idea how deeply it would change her life over the years to come.

Fast-forward to today and Bhaloo, 29, is a woman with a bright future: she has a University of Alberta criminology degree and a job as fund development manager for Boys & Girls Clubs Big Brothers Big Sisters, she was recently appointed to the U of A senate and she received the university’s Alumni Horizon Award.

She also donates $50 a month to the United Way, grateful to the umbrella organization that funds Boys & Girls Clubs Big Brothers Big Sisters of Edmonton and the path it ultimately provided for her.

As the U of A launches its annual United Way fundraising campaign, Bhaloo hopes the campus community will think about the impact their donations will have.

“The United Way is helping kids who are like me, who are eight or nine years old and struggling right now. Twenty years down the road, they are the ones who will be ambassadors for the U of A; it will come back full circle like it did for me.”

Last year’s U of A campaign raised $550,000 for the United Way and the more than 50 agencies it funds in the Capital Region that help people through education, income and wellness initiatives, including two campus-based projects: the Community-University Partnership and the Institute for Sexual Minority Studies and Services.

“It’s exciting to launch the 2014 campaign with the thought of just how much impact the U of A community, through its donations, can continue to have in making life better for vulnerable children, families and seniors,” said Chancellor Ralph Young, honorary chair of the U of A’s campus campaign.

“Imagine how much more could be done in tackling a solvable problem like poverty if we double last year’s campus participation rate from eight to 16 per cent,” he added.

“The U of A is a community of caring citizens who are concerned for those less fortunate, and as supporters of United Way, we believe in the difference that our contributions make in the lives of vulnerable people in the Capital Region.”

The U of A campaign launched Sept. 29 with a letter and pledge cards, which U of A employees can fill out and return using the included self-addressed envelope, or they can download a pledge form at the United Way website.

There’s also a fun lineup of campus activities to help raise dollars for the cause throughout the campaign, including a Loopy Lunch Oct. 1, Turkey Trot Oct. 4, a Faculty of Extension rummage sale Oct. 21 at Enterprise Square, a poverty simulation Oct. 24, a Plasma Car Derby Oct. 31 at the Butterdome concourse, and Chillin’ for Charity Nov. 5. Check out the U of A’s United Way page for full details.

Bhaloo’s own United Way experience started when she was nine, with the simple friendship of several Big Sisters, including one who remains a friend today. But the organization also provided her with many other opportunities as she grew up; extras like a free public speaking course, which provided a skill set she still uses in her career to raise funds and awareness for Boys & Girls Clubs Big Brothers Big Sisters.

But the biggest life-changer came when she received a scholarship funded through CIBC, a partner of Big Brothers Big Sisters of Edmonton. Working at a sandwich shop to help pay the family bills, busy with volunteer and school work and focused on surviving day to day, Bhaloo hadn’t thought much about what would happen after high school.

“I struggled academically and I never thought of post-secondary education as an option.”

The scholarship funded her undergraduate studies at the U of A, as well as her salary working summer jobs for not-for-profit agencies. Her sister also attended the U of A on the same scholarship program, earning undergraduate and graduate degrees, and she is now in medical school. Bhaloo went on to travel, earn a graduate diploma and eventually return to Edmonton to serve her community here.

“For me, it’s been a blessing to be a recipient of charity provided by those who give to the United Way. I was provided opportunities to make myself a better person. That’s what really ends poverty—motivating people to work for themselves and to be inspired so they want to do better for themselves.”