UAlberta set to bask in a rainbow of pride 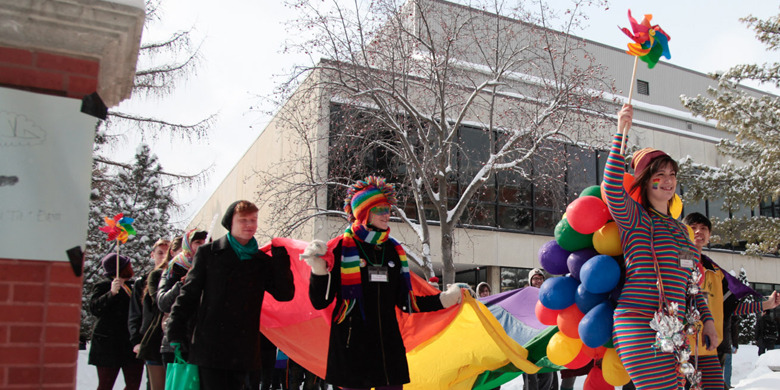 (Edmonton) Following close on the heels of the Sochi Olympics, and its heightened awareness of gay rights, the U of A’s second Pride Week is set to begin Feb. 26.

In fact, one event scheduled for the week of festivities is a panel discussion called “GLBTQ Sports and Athletics in a Post-Sochi World.” With former Olympians on the panel, it will be a chance for participants to share experiences and observations of sexual minorities in sports.

The week kicks off with Pink T-Shirt day Feb. 26, the internationally recognized day for bullying prevention, and continues for 11 days with some 15 events celebrating various communities of sexual minority, including an academic symposium, a speakers series, the Coming Out Monologues, a drag show and of course the campus pride parade on Friday, March 7.

"Pride Week is a really important way to bring visibility to an invisible population of students, staff and community members,” says Kris Wells, director of programs and services for the Institute for Sexual Minority Studies and Services. “Most importantly, it celebrates diversity on our campus as something we should be embracing rather than something we fear, attack or make invisible."

Pride Week was launched last year to an enthusiastic reception, so the goal this year is to build on that momentum, says Wells.

"Last year was a phenomenal success—all campuses participated fully, and I think one of the highlights was the ways students participated on their own, lighting up their residences in rainbow colours and coming out to the pride parade and hosting events.”

The headliner of the week is Laverne Cox, who plays a transgendered character on the Netflix television series Orange Is the New Black. An outspoken LGBTQ activist and actor, she was named one of the most influential trans people in America in the inaugural Trans 100 in 2013, and one of the top 50 trans icons by the Huffington Post in 2012.

Cox she will give a talk March 8 called, “Ain’t I a Woman: My Journey to Womanhood” to close Pride Week. Organized by the Gender-Based Violence Prevention Project of the Students' Union, the free session will explore themes of race, trans identity and gender-based violence. Cox will also lead an afternoon workshop for transgendered participants.

Pride Week organizer Alexis Hillyard says the celebration is taking on a life of its own this year, with various groups holding their own events. The sports panel, for example, is hosted by Team Edmonton, the local LGBTQ sports league community. And the Aboriginal Student Services Centre is hosting a Rainbow Bannock and Stew event to honour two-spirited people on campus.

Pink T-Shirt Day is organized by iSMSS in partnership with the Gender-Based Violence Prevention Project. More than 1,000 pink shirts have been sold so far, available in the U of A bookstore. Those wearing pink that day are asked to gather in the lobby of the Telus Centre for a group photograph.

“It’s also really important to note that Campus Saint-Jean and Augustana Campus are holding their own Pride Week events this year,” adds Hillyard.

The parade route has been revised for 2014—taking in more of campus, all cleared of snow and wheelchair accessible. Hillyard says she’s hoping for a better turnout than last year’s 200, especially since the parade falls at the end of the week to benefit from momentum.

UAlberta set to bask in a rainbow of pride
Newsroom