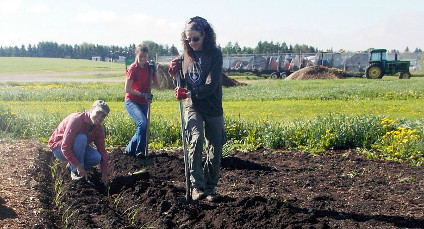 Down to earth: Debra Davidson works with students and volunteers as director of the Prairie Urban Farm on UAlberta's South Campus.

Debra Davidson will have ears of policy-makers at side event during COP21 conference.

Debra Davidson is in Paris this week to give a presentation about agriculture that can adapt to climate change. She says research on climate-smart agriculture should focus on retailers, policy-makers and consumers as well as farmers. (Photo: Trevor Chow-Fraser)

Debra Davidson, a specialist in climate change impacts and adaptation, will address influential participants to the upcoming United Nations climate change conference in Paris when she speaks to them during a side event on December 2.

As a delegate of the Worldwide Universities Network, Davidson will make a presentation about climate-smart agriculture in a pavilion affiliated with COP21, the 2015 Paris Climate Conference.

The Worldwide Universities Network is a group of 18 universities collaborating to address issues of global significance. Davidson’s presentation will focus on the kinds of research gaps that exist in supporting climate-smart agriculture, which is agriculture that can adapt to global warming and climate change.

In particular, she will make the case that climate-smart agriculture research shouldn’t be solely about what farmers can do to create more tolerant crops. The research should focus as much on other actors in the agri-food system, including the retailers, policy-makers and consumers, and should also include more social science research, Davidson said.

“This is my first COP,” she said, referring to the acronym for the 21st Conference of the Parties. COP is the annual international meeting of countries to review the implementation of the United Nations Framework on Climate Change adopted in 1992.

“But I understand that the people who attend the side events tend to be policy-makers, government and intergovernmental officials, people who drive the change,” she said. “You want to provide some compelling ideas to have them take back to their countries.”

“It favours farming practices that degrade ecological sources of resilience, reduce the diversity of foodstuffs available to consumers and leave us increasingly reliant on a small number of corporations for our food security.”

She’s advocating more scientific research on other forms of production, including small-scale farming, agro-forestry and urban agriculture. She hopes to convince those she addresses to shift funding toward research that acknowledges the value of alternative agriculture and farm diversity.

Davidson believes that such a shift in funding focus could happen quickly after COP21, where the goal is to achieve a legally binding and universal agreement on reducing emissions so that global temperature increases are limited to below two degrees Celsius.

“They will be making new policies within months of the meeting,” she said. “This is one of the peak periods of potential influence.”

Among the events she cites as likely exerting positive influence on the meeting’s participants: 10 of the world’s largest energy companies recently agreed that climate change is real and vowed to fight it; Pope Francis issued an encyclical last spring stating that climate change is a grave problem and subsequently pled for action at the UN; and last year, at COP20 in Lima, a draft document laying the foundations for a new global climate deal was created, which should speed decisions at COP21.

Additionally, said Davidson, in the past six months scientific evidence has built that extreme weather events are attributable to climate change. Meanwhile, the adoption of renewable energy options is surpassing expectations forecast annually by the International Energy Agency, she said.

These events provide much better incentive for positive action at COP21 than at COP15 in Copenhagen six years ago, when the world failed to create an agreement to succeed the Kyoto Protocol.

“It’s safe to say that the momentum going into this one, compared to Copenhagen, could not be more different,” said Davidson.