UAlberta spinoff company could be game changer in renewable fuels 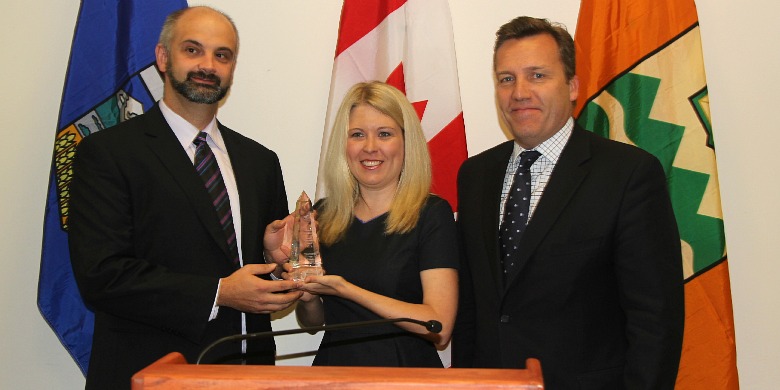 131010-david-bressler-tec-award-banner
David Bressler (left) accepts TEC Edmonton's University of Alberta Spinoff Achievement Award from Minister Michelle Rempel during the launch of Forge Hydrocarbons Oct. 10. They are joined by Tim Haig, president and CEO of the company.

(Edmonton) A University of Alberta spinoff company commercializing technology developed by a researcher at the university is introducing the next generation of renewable fuels.

Almost 10 years in the making, Forge Hydrocarbons is commercializing a patented conversion process developed by David Bressler, a researcher in the Faculty of Agricultural, Life and Environmental Sciences. The process takes agricultural feedstocks like animal fat, such as beef tallow, crop seed oil and even restaurant grease, and converts them into “drop-in” fuels.

Unlike traditional renewable fuels like biodiesel, ethanol and bio-jet fuel, drop-in fuels are chemically similar to and interchangeable with petroleum-based fuels, which means they can be used in their pure form as, for example, gasoline, natural gas or jet fuel. The patented process also converts the same agricultural feedstocks into solvents and diluents.

“I’ve been waiting for a technology like this for a long time,” said Tim Haig, president and CEO of Forge Hydrocarbons. An experienced entrepreneur, Haig started BIOX, Canada’s biggest and most successful renewable fuel plant, based on a then-breakthrough technology he acquired and commercialized from the University of Toronto, and ran the company for 12 years—until this opportunity presented itself.

“This is the first technology that creates drop-in fuels from agricultural and forestry feed stocks, and I know it will dominate the renewable fuel industry,” Haig said.

Bressler made his initial discovery in 2004 with funding from an NSERC Discovery grant. Since then, he has received more than $4.9 million from a variety of funders to pursue the research and commercialize the technology.

His patented conversion process uses high-temperature chemistry whereby the feedstock is heated with water to create a mixture of fatty acids and glycerol. Once the mixture is cooled, the fatty acids are separated from the glycerol and water. Those fatty acids are then heated to a point at which the oxygen contained within them is released. This is the key step that, until now, no one had been able to do in a cost-effective way.

Once the oxygen is removed, the fatty acid becomes a hydrocarbon. Further processing converts the hydrocarbon into the desired fuel such as gasoline, natural gas, jet fuel, diesel, lubricating oil, solvents or diluents.

Bressler adds that production of these drop-in fuels reduces greenhouse gas emissions by more than 90 per cent compared with production of traditional petroleum-based hydrocarbons.

The company received one of two University of Alberta Spinoff Achievement Awards from TEC Edmonton during its official launch this morning at a ceremony attended by Verlyn Olson, minister of agriculture and rural development, and the Honourable Michelle Rempel, minister of state for western economic diversification.

A pre-commercial plant using the company’s patented conversion process is now being commissioned in Agri-Food Discovery Place on the University of Alberta’s South Campus. With a capacity to produce 200,000 litres a year, it will be operational by the end of the year. The following phase of the company’s evolution will be a full-scale commercial plant.

Funders for the project during the last decade include Alberta Enterprise and Advanced Education, Alberta Innovates – Bio Solutions, the Alberta Meat and Livestock Agency, the Canada Foundation for Innovation, Forge Hydrocarbons, the Natural Sciences and Engineering Research Council of Canada, the University of Alberta and Western Economic Diversification.

When University of Alberta sociologist Michelle Maroto came across a Toronto Star article about an Ontario woman struggling to make ends meet while battling Type 1 diabetes, she knew the story was just the tip of the iceberg. Anna Costa was …
Read more from this release