How students and Trioova founders accomplished one of the greatest entrepreneurial challenges. 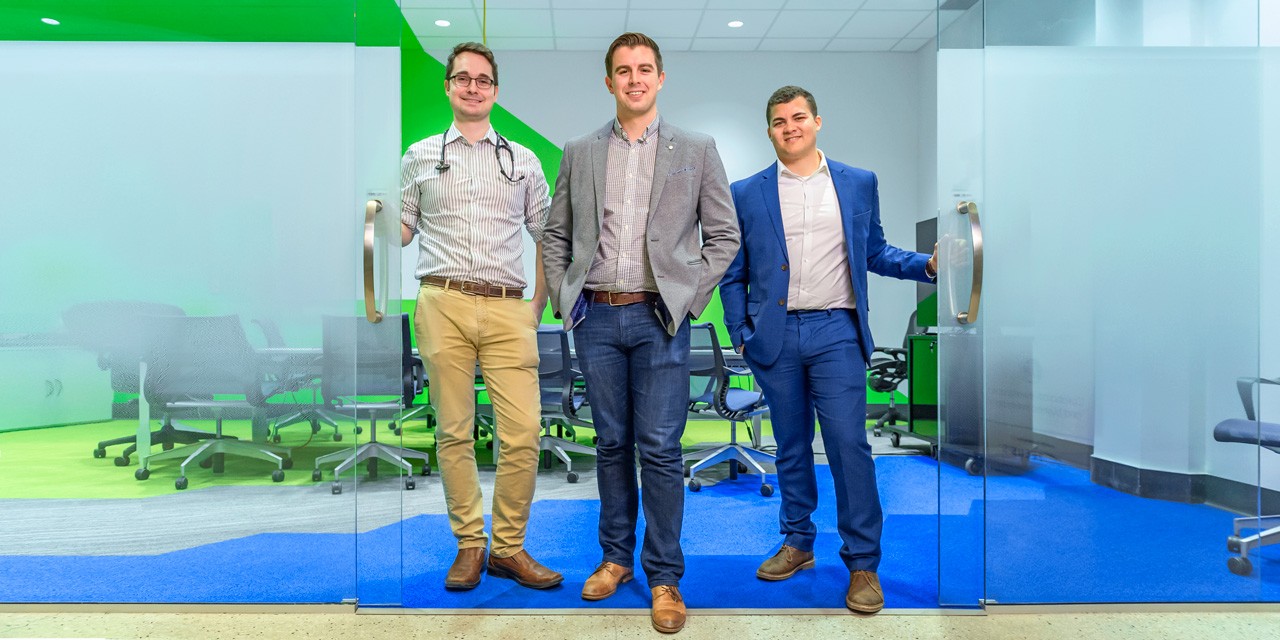 Making the “business pivot”—changing the company concept in response to market feedback—is hard even for experienced entrepreneurs.

“You’ve put your heart and soul into a business and then you realize that for whatever reason, it’s just not viable. What do you do?” asked Arden Tse, manager of the University of Alberta’s Venture Mentoring Service in the Office of Advancement. “Switching directions takes a lot of courage.”

But that’s just what the founder of Trioova, second-year MBA student Luke Butterworth, did in the summer of 2017—giving up more than a year’s worth of time and money on what he believed, at the time, to be the best way to fill a major gap in the health-care system.

“Trioova began as a software platform that would connect disability insurers and employer groups with health professionals through an e-referral system to better co-ordinate patient care,” explained Butterworth.

“I saw the need back when I was practising kinesiology,” he added. “Patient referrals would get lost or take months, and there was very little co-ordination of information between health-care providers, and that created redundancy and increased the risk of errors.”

While Butterworth, who is CEO, and co-founders Adam Simmons, COO, and Michael Bildersheim, a third-year MD/MBA student, made significant strides by developing the software and garnering interest from a few major insurers, getting participation from major players in a public health-care system proved to be too difficult.

“Our idea was innovative, but the sectors we were targeting—for example, health insurance—aren’t fast movers or early adopters,” explained Butterworth.

“Trioova has always been on target in terms of the trend of centralizing data in health-care services,” agreed Tse, who oversees the program that assigns mentors to alumni (and occasionally students) to help develop entrepreneurship. “So the market need was there. It was just an issue of making the business model work.”

The situation came to a head in July 2017 when Trioova teams had been built out and there were a few licensing agreements in place. Butterworth said the epiphany came to him one night.

“I was just about to go to bed when I realized I could design this differently around the patient.

“Ultimately, part of our business model was reliant on clinics, hospitals and insurance companies to use the service. On the other side, we have the user who wants the service. At the end of the day, it just didn’t have a lot of incentivization for the health-care side to use it.”

“Large incumbents are open to innovation, but true innovation adopters are few and far between,” added Simmons, who shared Butterworth’s frustrations. “I was in Toronto talking to potential partners and realizing we had this problem and was trying to figure out how we could do this without the public health system and insurers. I called Luke, and we were on the same page.”

Within three weeks, the founders had sketched out a clickable software model that offered services to end-users directly.

“We hired a development team and got going. Soon we had a frame mock-up, and honestly, after making the change to target caregivers and patients, everything really just clicked,” said Butterworth.

“It’s based on the same principle of resolving the breakdown between the medical transfer and co-ordination of care between health-care practitioners; we just made the end-user the payer,” he added.

“Entrepreneurship is all about trying to make something work,” said Lan Tan, director of entrepreneur development at TEC Edmonton, a business accelerator and joint venture between the U of A and the Edmonton Economic Development Corporation.

“Trioova was a member of our TEC Launch program, which assigned a mentor to a startup. I can tell you Butterworth is a real leader, and this team has done an amazing job connecting with its community and potential end-users. They’ve gathered a ton of information from future customers and from advisers at all levels, and would not make such a decision lightly.”

She added that any major business pivot should be rooted in insight.

“But it’s still a big move. It’s very courageous of those three founders, and, at the end of the day, it’s what entrepreneurship is all about.”

“It was very challenging,” admitted Butterworth. “We knew we would be kissing a lot of money we’d invested goodbye. And a lot of business relationships. It was a tough decision and we made it quickly.”

They informed the Trioova team (seven in total) and minutes later someone asked Butterworth if he regretted it.

“It was dramatic. But relying on somebody else for our technology just wasn’t part of the vision. We needed to own the platform outright.”

Trioova’s invested heavily in ensuring the latest security for its software, which acts as a virtual home base for all of a caregiver’s medical information, from appointments to medical records. An in-house service called the navigator, or a licensed practical nurse, is assigned to each user to act as a human point of contact in the often challenging health-care journey, and to answer medical questions.

Trioova is also now designed to connect caregivers with a host of medical service providers.

“The benefit of having everything in one place about, for example, an aging parent, is that it can be used by the whole family, from prescriptions to a personal medical assistant,” noted Simmons. “It’s really exciting how quickly this is all coming together.”

The team is all set for a soft launch on April 3 and has already lined up two pilots, including one with the Canadian Forces Western Health Services later this year.

For his part, Butterworth is so busy with Trioova, he’s finishing his business degree part-time.

“He’s really a strong leader,” said Tse, adding that following this through speaks to his tenacity.

When Butterworth is asked if he has any regrets today, he answers firmly: “Not at all.”