The university’s promise of uplifting the whole people extends well beyond our immediate borders to the international community, and we will continue to live that promise.

Momentum builds as universities across Canada offer aid to students and scholars in search of a better life. 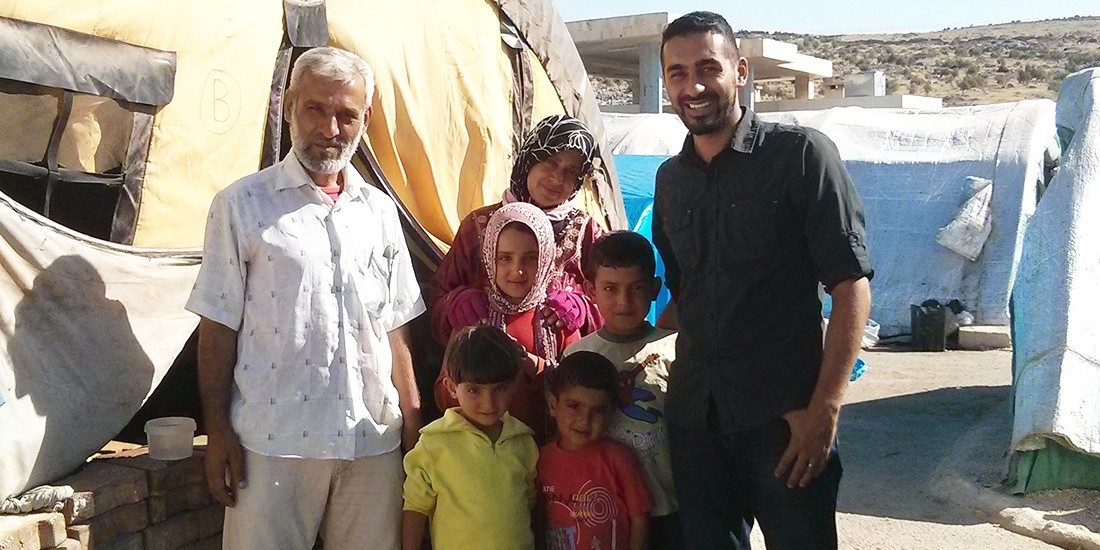 Alumnus Saleem Al-Nuaimi (right) stands with a refugee camp administrator and his family at a camp in northern Syria. Al-Nuaimi's efforts to provide psychiatric support for refugees are just one example of how the UAlberta community is rising to the challenge of a global crisis.

As the Syrian refugee crisis continues to uproot families from their country and their lives, Canada’s post-secondary institutions—including the University of Alberta—remain dedicated to lending a helping hand.

“I am heartened to see universities from across Canada rising to the challenge presented by this global tragedy and offering aid to Syrian students who are in search of a better life,” said U of A president David Turpin.

The U of A last month announced financial aid for up to 10 Syrian students affected by the conflict in their country to study on campus through a new President’s Award for Refugees and Displaced Persons. As well, other post-secondary schools including the University of Toronto and Ryerson University are responding with various initiatives to help Syrians who have fled their war-torn country.

The President’s Award enables eligible Syrian students to start classes as early as January of 2016 and covers the costs of their tuition and living expenses.

To help the campus community connect with this and other resources for anyone who wants to assist Syrian refugees, the U of A has created a new refugee support website. The site spotlights related U of A initiatives such as participation in the Scholar Rescue Fund, which to date has provided safe research haven on campus to two Syrian researchers: Abdul Al-Shehabi and Ghada Bachour. It also includes information on how to donate to the President’s Award, as well as external links for citizens looking to offer help beyond the post-secondary sphere.

“As institutions of learning and humanity in one of the most fortunate nations in the world, Canadian universities and colleges have a duty to lead in and set examples of global citizenship,” said Turpin, who also serves as chair of the board of directors for World University Service of Canada. “Canada was itself founded and built on the strength of immigrant people who sought a better life and this country is today a strong, vibrant nation because of their contributions.

“The University of Alberta has always been committed to welcoming people from all over the world,” Turpin said. “The university’s promise of uplifting the whole people, made more than 100 years ago by our first president, extends well beyond our immediate borders to the international community, and we will continue to live that promise.”

When one of the big four professional sports leagues in North America expands into a new market, it brings with it an increase in influenza-related deaths, according to a University of Alberta sport …
Read more from this release