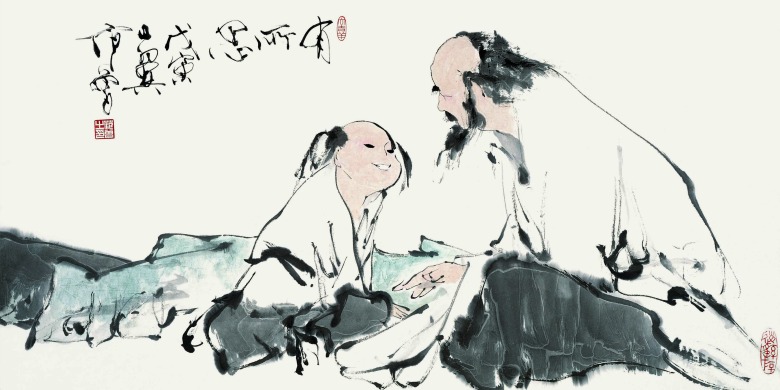 130926-fan-zeng-painting-banner
Some Thought Provoked Between the Old and the Young is one of 35 artworks by Fan Zeng appearing in an exhibition from Oct. 1 to 26 at Enterprise Square Galleries. A delegation from Nankai University will also take part in the opening celebration.

(Edmonton) A visit to the University of Alberta by a renowned Chinese master artist and a delegation from Nankai University is enriching cultural and educational ties between the two institutions and raising Alberta’s world profile.

In recognition of its relationship with Nankai University, the U of A is hosting Professor Fan Zeng—a former dean from Nankai—along with the university’s president, a group of professors and 26 Nankai students. The delegation has travelled to the U of A to celebrate Fan’s art exhibition as it opens Oct. 1. Fan was honoured in a degree ceremony by the U of A last year in Beijing for his lifetime contributions as a philosopher, artist and academic.

The U of A is honoured to host Fan and the Nankai delegation, said Carl Amrhein, provost and vice-president academic.

“The University of Alberta values deeply our cultural, social and economic collaborations with China and with Nankai University,” he said. “The bonds created through exchanges such as this further the U of A’s commitment to its global relationships, and raise the international profile of Alberta.”

The U of A operates more than 100 exchange initiatives alone with Chinese higher learning and research institutions, and the Nankai visit supports the federal government’s current Canada-China Programme of Cultural Co-operation.

During the cultural visit, which runs Sept. 30 to Oct. 3, Nankai University president Ke Gong will discuss collaborative opportunities with U of A President Indira Samarasekera, and together they will declare Oct. 1 “Nankai Day,” which is marked by visits of the Chinese scholars to counterparts in various U of A faculties and departments. Together, they will explore opportunities for joint academic and research activities.

The day also features the opening of Fan’s art exhibit, The World of Splash Ink: Paintings and Calligraphy by Professor Fan Zeng, and a free public lecture being given by the master painter at 1 p.m. in Convocation Hall, which will also be available as a live stream.

Fan’s artwork is being hosted for the first time ever in North America through University of Alberta Museums. His work as one of China’s last living modern master painters opens Oct. 1 and is only on exhibition until Oct. 26 at Enterprise Square Galleries. The 35-piece exhibition displays Fan’s technique of simple but vivid brushstrokes and his deeply spiritual communication of his subject matter, which encompasses landscapes, flower and bird pairings, and figure painting as well as poetry and calligraphy. His works are highly valued by Asian art collectors.

Being chosen to show Fan’s work is a privilege for the U of A, Amrhein added. “We are honoured to be hosting Professor Fan and his exceptional artwork. This is a once-in-a-lifetime opportunity for our community to engage with this art and to hear him speak about it.”

Fan’s exhibition and the Nankai visit help promote Alberta and raise the U of A’s profile in China, said Cen Huang, executive director of International Recruitment and Relations for University of Alberta International.

“The University of Alberta is committed to internationalization, and this very special visit takes this relationship with China and with Nankai University further, by combining educational and cultural exchanges touching professors and students.”

Fan and Gong will also view the university’s Mactaggart Art Collection while here, and Fan’s visit to Alberta concludes with a visit to Banff and Lake Louise to view—and perhaps paint—the beauty of Alberta, said Huang.

As part of the exchange, performances by the award-winning Nankai University Choir are featured throughout the visit, and the musicians will also practise with the U of A choir. As well, Nankai graduates of the U of A will attend an alumni meeting on campus, Huang said.

Fan’s exhibition, which includes the City of Edmonton as the lead sponsor alongside additional supporters, is a chance to explore China beyond the perspective of economics and business, Huang noted.

“China and North America do business together, but by connecting through an exhibit such as this, you touch the community and this has huge impact beyond business opportunities,” Huang said. “The arts are the most important form to help people understand cultures and traditions from other countries, because this is at the most human level.”

Fan’s works reflect his humanity and a deep understanding of Chinese culture, said Huang. “His paintings are not just paintings, but philosophical works; you can see the poetry in his art. When you see his painting you never forget it.”

His skill as an artist and contributions to higher education have earned Fan many honours in addition to his U of A degree. In addition to founding and leading Nankai University’s oriental art department, he was declared a Knight of the French Legion of Honour and in 2009 was named as one of the top 10 philanthropists in China.

With the support of the Government of Alberta and the Confucius Institute in Edmonton, a curriculum-based school program has been built around The World of Splash Ink. Already booked to capacity, the program brings junior and senior high school students from Edmonton and rural Alberta to study the exhibit.