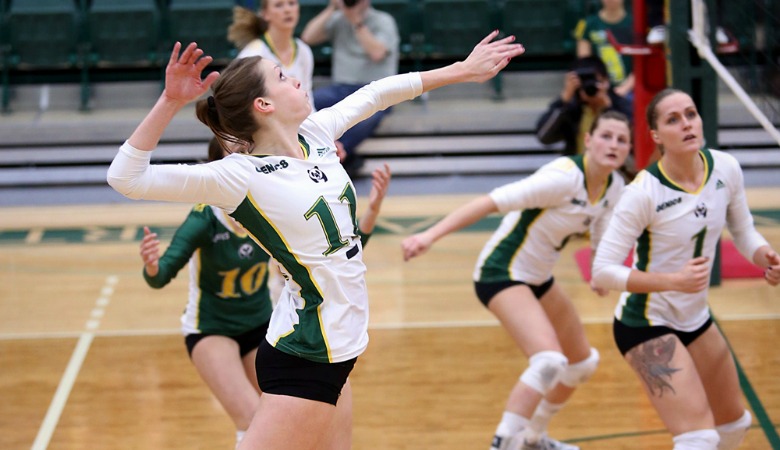 (Edmonton) A star student and athlete on the University of Alberta Pandas volleyball team was named one of the top eight Canadian Interuniversity Sport Academic All-Canadians for the 2012-13 season.

Every year, CIS recognizes student-athletes as Academic All-Canadians for maintaining an average of 80 per cent or better over the academic year while competing for their university’s varsity teams. Among these outstanding individuals, one female and one male student-athlete from each of the four CIS regional associations are selected annually to make up the top eight.

Ellis, a three-time Academic All-Canadian who earned her BSc in kinesiology with distinction last June, is the U of A's first student-athlete to make the top eight since 2005-06, when Pandas hockey player Kristen Haag was honoured—part of a five-year streak from 2002 to 2006 in which a U of A student-athlete was chosen for the honour.

Ellis, who maintained a 3.5 grade point average as a student, was equally impressive as an athlete in her five seasons with the Pandas. She earned three selections as an all-Canadian and as many nods as a CIS championship all-star while leading the Pandas to three Canada West medals, one conference title and a pair of appearances in the CIS final. She represented Canada at the 2011 Universiade in China, and was named the U of A’s most outstanding female athlete in each of the past two years.

“Jaki left an indelible mark on the Pandas volleyball program. Her tremendous work ethic and passion for volleyball enabled her to reach the highest levels within our sport,” said Pandas volleyball head coach Laurie Eisler. “She carried these same characteristics to her studies, which are evidenced by both her grade point average and her engagement in the learning process. She is a tremendous role model who will excel in any field to which she sets her sights.”

Ellis and the other seven members of the elite group will be honoured Nov. 12 at Rideau Hall in Ottawa.

Since CIS began recognizing the top eight Academic All-Canadians in 1993-94, the U of A has had the second-highest number of student-athletes chosen, with 12.

In all, the U of A has produced more than 2,200 Academic All-Canadians.

—with files from Canadian Interuniversity Sport