Business student is first ever from UAlberta selected for Canadian Missions in China internship program. 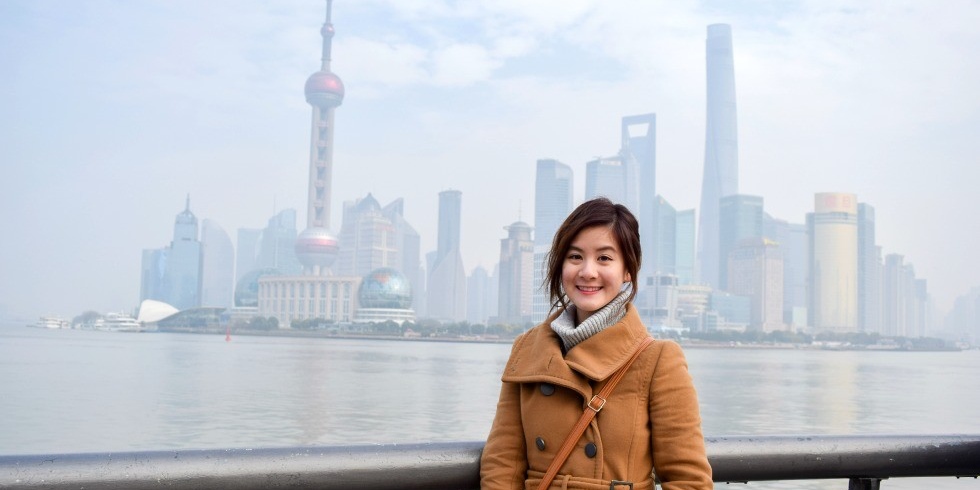 Felicia Liang beat out dozens of candidates from across Canada to become the first UAlberta student selected for the Canadian Missions in China internship program.

(Edmonton) An intrepid University of Alberta business student has landed a prestigious internship in the fast-paced, entrepreneurial centre of Shanghai.

Felicia Liang, a fourth-year business student, beat out dozens of candidates from across Canada to secure a six-month internship with the Trade Section of the Consulate General of Canada in Shanghai, offered through the Government of Canada’s Canadian Missions in China program.

“I am still in awe at how vibrant the city is,” said Liang by email, just a week after arriving. She has been to Shanghai before to visit relatives but is now truly experiencing the city by living in its core. “The city is very diverse, with a harmonious blend of Oriental charm and Western influence.”

From now until June, Liang will work as an intern in the consulate’s Trade Section, on the Science & Technology/Innovation Team. She will support the group in planning and executing events, conferences, festivals, high-level visits and delegation activities that foster Canada-China trade relations. Her work will involve sectors such as arts and culture, consumer products, information and communications technologies, life sciences and ocean technologies.

Liang learned about the internship opportunity from exploring the U of A’s Education Abroad website last summer. She had just returned to Canada from an exchange study term at Hanyang University in Seoul, South Korea, and knew she wanted to go abroad again, this time on a program focused on international business. She applied for the internship in October, which quickly spurred a phone interview with the embassy in Beijing, and led to a conditional offer just a month later.

“I was so excited because I was told that the internship is a very competitive, Canada-wide competition, and that no University of Alberta student had ever been selected before,” said Liang. “The first thing I did was call my mom; she is originally from Shanghai so this opportunity was really meaningful to both of us.” Liang received her final offer letter in early January, and arrived in Shanghai last week.

Her latest international adventure builds upon an already impressive roster of globally minded activities during her studies at the U of A. Before studying abroad, Liang worked for University of Alberta International as the volunteer co-ordinator for International Week and volunteered as senior peer mentor in UAI’s Peer Program, meeting students from around the world. She also joined the Education Abroad Squad: International to help promote global opportunities to other U of A students. And she’s enrolled in the Certificate in International Learning, which she will earn alongside her undergraduate business degree.

“These experiences were all wonderful ways to connect with like-minded peers and remain ‘international’ while back home,” said Liang. “Being able to hear different perspectives from international students at U of A helped me to broaden my own way of thinking and become more open-minded, which ultimately helped me be more culturally sensitive and adaptable while abroad.”

Liang hopes the internship experience in China will give her the chance to develop professionally, build networks and become more independent.

“It will be a great opportunity to learn how business and trade is conducted between two countries—the personnel and procedures involved—and to learn about the sectors of the Chinese and Canadian economy with large growth potential and how these business opportunities are undertaken by companies.”

Liang envisions a career in an international environment where she can use her language and cultural skills, but she is still figuring out exactly what that will look like. “It is important at this point in my academic career to engage in as many experiences as possible to discover where my passions and skills lie, and hopefully turn those into a viable career path.”

“How we operate and do business today is far more globalized and not defined nearly as much by geography,” says Baron. “The skills students acquire while studying or working abroad are invaluable and will often be the influencers that will make these graduates stand out among their peers in a progressively competitive job market.”

Liang believes her international learning will give her an edge and she encourages fellow U of A students to take advantage of opportunities.

“Going abroad is so much more than just attending school or going to work in another country. Meeting people with different backgrounds taught me how to be open-minded and it has definitely helped me develop my communication and interpersonal skills, which are essential in any career field,” she says. “Every country has its own special character, and immersing yourself in the local culture is one of the most fulfilling experiences you can have.”

Education abroad opportunities are in focus this month, as the Feb. 2 application deadline approaches for the e3 summer programs and semester exchange programs for fall 2015 and winter 2016. Application deadlines are also coming up for select international internship programs, including The Washington Centre and the Alberta Saxony Intercultural Internship Alliance program in Germany.

Global learning is also in focus as campus gears up for International Week 2015, running Jan. 26–30.