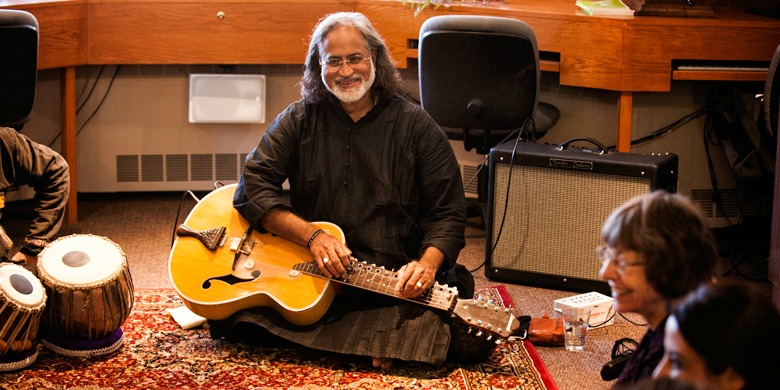 130404-vishwa-mohan-bhatt-banner
Visit from a virtuoso: Vishwa Mohan Bhatt teaches a master class in Indian classical music for UAlberta students in the Indian Music Ensemble. The ensemble will open for Bhatt in a concert April 5 at the Winspear Centre. (Photo: Richard Siemens)

(Edmonton) A group of University of Alberta music students will get a profound academic experience when they share the stage with a Grammy award-winning guitarist from India.

The Indian Music Ensemble in the Department of Music is set to open a concert April 5 at the Winspear Centre by the internationally renowned Indian classical musician Vishwa Mohan Bhatt.

But the show isn’t the only experience the students will come away with. Bhatt and his tabla player, Subhen Chatterjee, have spent about a week at the U of A teaching a master class, playing and demonstrating Indian classical music to students and faculty. The creator of his instrument, the Mohan Veena—a slide guitar—Bhatt spent an evening tutoring students with the ensemble and listening to the group’s take on some of his compositions.

“They are very good students, very enthusiastic. They quickly grasped what I was teaching them. I had a good rapport. I was happy to see them play my compositions,” Bhatt says.

Indian Music Ensemble director Sharmila Mathur had prepared the students beforehand, but she says she was still quite anxious about how they would handle the music in Bhatt’s presence—partly because her association with Bhatt goes back many years.

“My mother learned singing from his mother, and I started learning the sitar from him,” Mathur says. “There’s a lot of improvisation in Indian classical music, so when you learn from your guru—your teacher—you take his style of playing with you and subconsciously pass that style on to your students. So I’m really keen to hear what he says about my students because this time they’re playing his composition. I want to hear his views, and his style of playing that I’ve passed on to students. So this was like a test.”

In this case, Mathur’s guru says she passed.

“Whatever I knew I taught her,” Bhatt says. “The students played very well and I’m impressed with their performance, quite a bit. They have grasped the Indian traditional classical music in their performance,” he says.

Bhatt says the source for Indian classical music is often the artists’ imagination, not the musical notation. “It is completely based on the improvisation of the musician, it’s not written. We don’t rehearse at home and play, not at all,” he says. “Creativity takes an important role when playing this music. More than 80 per cent of playing is from the imagination and improvisation of the artist at the time of performance.”

But he’s certain the students, whom he says won’t be playing with a score on Friday either, will live up to expectations. “The ensemble is a good opportunity to build on their skills. I’m confident they will do well; I’ve heard their practice and they did a good job,” he says.

The concert, organized by Folkways Alive! and sponsored by a community group, Raga Mala, and the music department, is an example of the university strengthening its relationship with diverse communities, says Jonathan Kertzer, director of Folkways Alive!

“It’s a very important part of my job, which is to work with communities in Edmonton,” Kertzer says. “Smithsonian Folkways has always had a strong involvement in communities of all kinds. And we’re trying to build those bridges with communities all the time.”

“It’s great to have an artist of this stature here,” Kertzer says. “This is a great example of a very highly developed musical style that many people may not know about that could be of interest to the general community, and not just the Indian community. We need young people to be interested in this music, and having someone like Bhatt could be inspirational for students, and attract them to this university.”