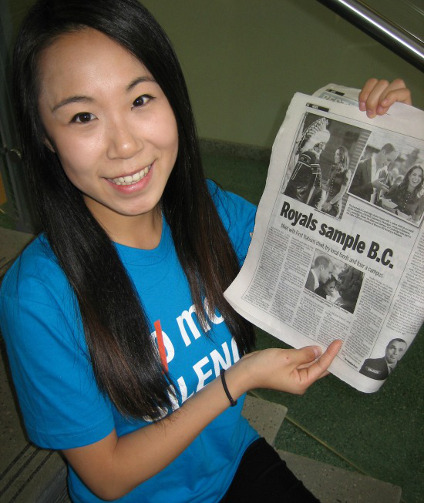 UAlberta students meet with Will and Kate

Student mental health gets royal treatment as psychology students discuss services on campus with Duke and Duchess of Cambridge. 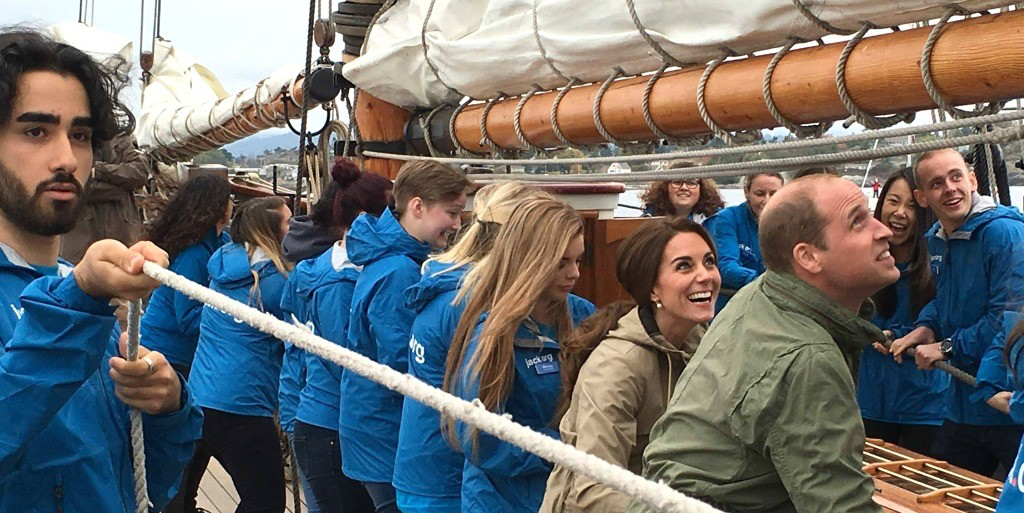 Psychology students Nancy Zhao and Ryan Forster (right) and their fellow Jack.org members help the Duke and Duchess of Cambridge de-rig the sails on a tall ship in Victoria Harbour. (Photo: Sail and Life Training Society/Facebook)

Mental health issues for youth on the University of Alberta campus—and across Canada—got the royal treatment when two U of A psychology students met with the Duke and Duchess of Cambridge last weekend.

Nancy Zhao and Ryan Forster were among 19 mental health advocates from their organization, Jack.org—and the only two from Alberta—who met with the royal couple Oct. 1 on board a tall ship anchored in Victoria’s harbour to talk about mental health issues for young people.

The hour-long event saw the royal couple, clad in khakis and jackets, working alongside the students to hoist two tall sails on the ship and then, in a casual setting, meet with them to learn more about Jack.org. The national network of student volunteer leaders has 104 chapters in high schools and post-secondary schools across Canada, including a U of A campus chapter led by Zhao and Forster.

“It was amazing to be able to tell the duke and duchess what Jack.org is doing across the country,” said Zhao, who told the duchess about what mental health supports were available on the U of A campus. “She mentioned how it’s great to have these services.” Zhao also got a chance to tell the duchess about a conference hosted earlier this year by the U of A chapter, which later resulted in a greater uptake of mental health services on campus.

“It felt great to share what our team on campus is doing.”

Forster, meanwhile, was quizzed by the couple about the Jack Talks program, which sends speakers into schools and around campuses to talk about self-care and the importance of reaching out for help. Feeling the pressures of university life himself when he became a student, Forster noticed no one was talking about it.

“In an achievement-based area like a university, it can be easy to fall into that feeling of loneliness,” he said. He joined Jack.org after talking with Zhao, one of his classmates, about the need for more awareness.

Both students were impressed by the royals’ casual warmth and the genuine interest they showed in mental health issues.

“They were a lot more down to earth than I thought they would be,” Forster said. “It felt like they were interested in what I had to say. It was like any other conversation; I didn’t feel intimidated.”

“It was a once-in-a-lifetime opportunity,” Zhao added. “I was really aware of all the positive emotions going on.”

Prince William and Duchess Catherine made youth mental health a focal point for this visit to Canada, and have expressed support for the issue, saying that they wouldn’t hesitate to seek help for their own children if necessary.

Filling a real need across campus

Mental health wasn’t really on her radar before coming to the U of A, Zhao said. “It was never really talked about in school.” But during her first year of studies on campus, one of her friends was diagnosed with depression and Zhao wanted to help her.

“I had no idea how to support her,” she said.

“We want students to talk freely with their friends and their peers about how they are feeling and know that it’s OK to talk about it.”

The typical stereotype of someone who may be struggling with their mental health—someone who can’t get out of bed or function—can be misleading, she added.

“Individuals can be struggling with their mental health and be high-functioning, but inside they may be fighting a battle we don’t know they are fighting.”

The campus chapter of Jack.org, which has about 70 members, has collaborated with other U of A support services like the Sexual Assault Centre, the Peer Support Centre and the Community Social Work Team, and has hosted user-friendly events—amped up with fun props like ball-filled kiddie pools and idea jars—to get students talking and laughing together. Even low-key interaction can ease stress, Zhao said. “It puts a smile on someone’s face who may be having a bad day.”

Zhao was glad to have the chance to be part of a royal event that she hopes “draws attention to youth mental health on a national and international level.”

She also hopes the duke and duchess return to Britain with a deeper understanding of how important it is for young people to be open and honest about their mental health.

“The power of conversation is so big, and it shouldn’t be underestimated.”

UAlberta students meet with Will and Kate
Newsroom