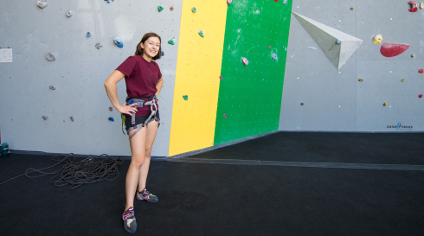 Onward and upward: Kaelin scales the wall at the Wilson Climbing Centre, where she led rock-climbing camps as a member of UAlberta's youth climbing team. (Photo: Richard Siemens)

Kaelin Koufogiannakis has been coming to campus since Grade 7; now she’s starting her first year as a student with a $50,000 scholarship. 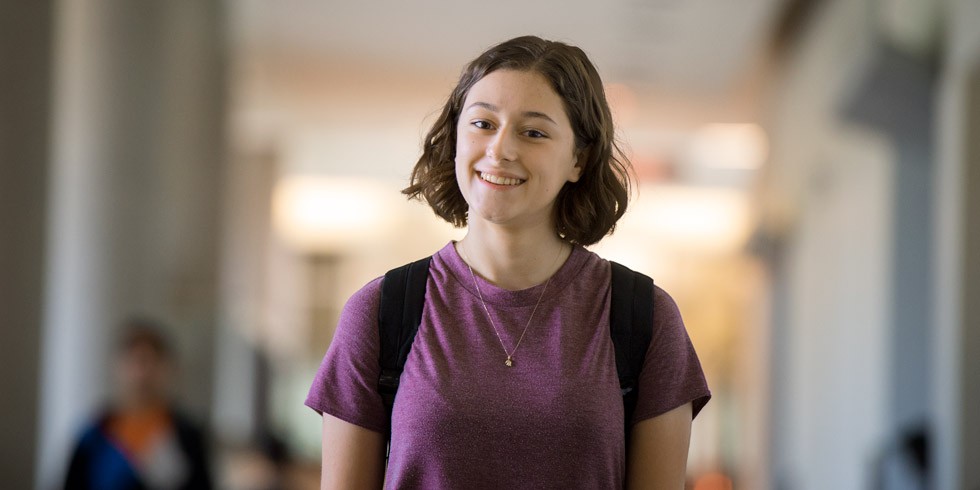 President's Centenary Citation winner Kaelin Koufogiannakis is starting her first year as a science student at UAlberta, but she's no stranger to campus. (Photo: Richard Siemens)

Starting her first year of studies at the University of Alberta is no biggie for Kaelin Koufogiannakis—she’s been hanging around campus since she was a kid.

Beginning classes this month in the Faculty of Science is the next exciting step for this math and science whiz, who cut her teeth on popular U of A summer camps like DiscoverE and later, WISEST. Now 18, the Strathcona Composite High School grad can’t wait to crack the books. And it doesn’t hurt that her student career is being kick-started with this year’s $50,000 President’s Centenary Citation, the U of A’s most generous undergraduate scholarship.

As a lifelong fan of the U of A, Koufogiannakis feels blessed by the funding windfall and doubly so by the wonderful experiences she’s had on campus while growing up.

“I’ve lived near the University of Alberta my whole life so I’ve already experienced much of what the U of A community has to offer. It’s a diverse, supportive community of students, faculty and outreach into the greater community, and I like that.”

Koufogiannakis discovered the U of A in Grade 7 when her parents enrolled her into DiscoverE, a science camp offered by the Faculty of Engineering for elementary school-aged students. The subsequent years she attended the camps stoked her natural curiosity about science and especially about math. A diehard fan of math videos and science podcasts, Koufogiannakis is fascinated by numbers and she intends to fully explore their potential over the next four years. “It’s fun to be able to problem-solve and quantify things.”

In fact, she’s savouring her course load as an academic buffet—a dollop of sociology here, a slice of biology or human geography there. “Hopefully I can narrow it down by the second or third year,” she said. “Right now, I want to explore as many areas of science as I can.”

Any anxiety she might have harboured as a first-year rookie to a large campus was long ago dissolved through her advanced placement program in high school, which gave her a taste of university-style classes and textbooks. Also pivotal was her time with WISEST, (Women in Scholarship, Engineering, Science & Technology), a summer research program for Grade 11 students that places them in U of A labs.

Through WISEST, Koufogiannakis spent the summer of 2015 tinkering in a U of A engineering lab, working with a team that was developing a more efficient fuel cell. Along the way, she connected with other women who are already carving out the path she hopes to take as an aspiring scientist. “I met a lot of mentors, including Margaret-Ann Armour, who was one of the pioneers for women in science here at the U of A.”

Knowing that others have already blazed a trail gives Koufogiannakis confidence she can do the same.

“The opportunity to continue in a research direction was one of my reasons for coming to the U of A. I want to make my own discoveries and contribute to the massive amounts of research that the U of A publishes as a leading research university.”

Science, she believes, plays a big role in assuring the world’s well-being. “There’s something to be said for putting faith in science to help answer tough questions. And I love knowing that there are always more questions to solve.”

Outside of her studies, Koufogiannakis also plans to volunteer—something else that she had a taste of on campus by leading rock-climbing camps as a member of the U of A’s youth climbing team. She was also a junior competitive team member at the Wilson Climbing Centre, opened last year.

In between classes, Koufogiannakis plans to find time to continue her volunteerism on campus. “It makes the university experience more meaningful when you know you can contribute.” A firm believer in making sure everyone has the essentials, she is applying to join the Campus Food Bank. “Ending poverty and hunger on campus is crucial to providing every student at the U of A an equal opportunity to study to their full potential, and I would like to contribute to that goal.”

Fortified by her centenary scholarship as well as a couple of smaller academic grants, Koufogiannakis is grateful to the U of A for the start she’s been given as the next phase of her life begins. And she’s glad that the university is still in her life, as it was when she first stepped onto campus as an eager youngster years ago.

“I’m coming to a place I already call home.”

Koufogiannakis is among top faculty, students and staff being recognized at the U of A’s annual Celebrate! Teaching. Learning. Research. event being held at the Myer Horowitz Theatre Sept. 21. Everyone is welcome to attend.