Students, faculty and staff weigh in on issues and policy options at town hall in advance of legalization this summer. 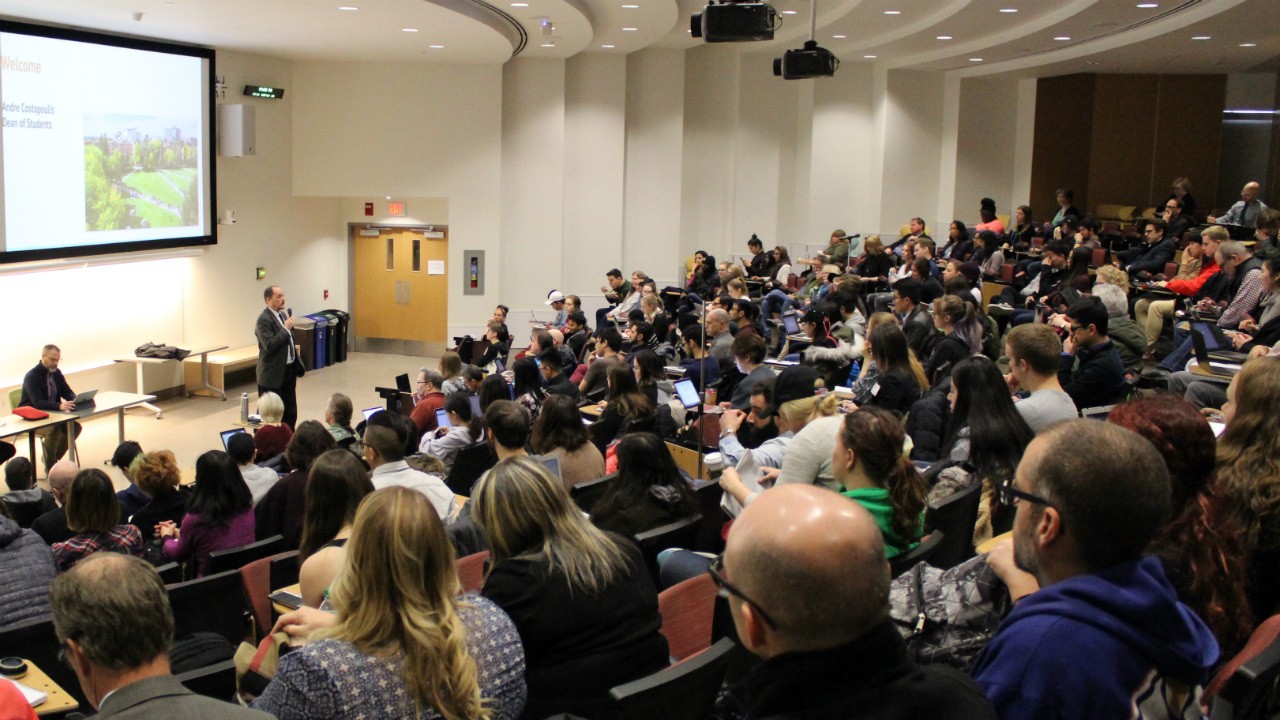 Dean of students André Costopoulos addresses a full room at the UAlberta town hall meeting to gain input from the campus community on how to prepare for cannabis legalization. (Photo: Hallie Brodie)

The University of Alberta is seeking input from the campus community on how to prepare for the legalization of cannabis, expected to take effect this summer.

In a town hall meeting Friday, students, faculty and staff had a chance to air questions and concerns about consumption of the drug on university property. The community is also being asked to complete an online survey on cannabis policy before March 30.

“There are a number of challenges related to legalization, and we need to hear from the community—what works for you and what are your concerns,” said dean of students André Costopoulos. “If you had to come up with a policy, what would it address, what would it look like?”

The university’s working group on cannabis policy will use the feedback to consult with various groups over the next few months before the board of governors makes a final decision.

According to Andrew Leitch, director of Risk Management Services’ Enterprise Risk Management, the group is weighing whether the campus needs its own policy regarding the sale, possession and consumption of the drug beyond those laid out in provincial and municipal legislation.

Of chief concern for the university is safety, said Leitch, in addition to the academic and personal development of students, faculty and staff. He said any plan must also be consistent with the U of A’s values and national reputation.

Those who attended the town hall voiced concerns about where smoking and vaping should be permitted on campus, if at all. Some wanted assurances that exposure to second-hand smoke and potential unruliness would be controlled; others asked how a policy change would be enforced.

Adam Brown, vice-president-elect, external, for the Students’ Union, shared a number of recommendations after consulting with “literally hundreds of students” during his campaign.

“The biggest thing I heard was that—whether you’re for or against the legalization of cannabis—it will be here whether banned or not, so we should all just accept that and work around it,” he said.

Brown said students also want to ensure any new policy reflects the rights of both consumers and non-consumers, allows for possession of legal amounts of cannabis in residence, and provides adequate health supports for those who are adversely affected by the drug.

He said the university should be prepared for the fact that cannabis retail outlets will likely appear close to campus property, even if sales are prohibited on campus, and that any new policy should align as closely as possible with municipal bylaws to avoid confusion.

In response to concerns about abusive or disruptive conduct resulting from cannabis consumption, assistant dean of health and wellness Kevin Friese pointed out there are already regulations in the Code of Student Behaviour to deal with it.

According to the latest data, 23 per cent of U of A students reported consuming cannabis in the past year, said Leitch. It is currently the most widely consumed illicit drug in the world, and Canada has among the highest rates of consumption.

“Will that go up after legalization? According to research done around the world, there is no direct correlation,” said Leitch. “In some cases it stays the same, in others it goes up and sometimes it goes down.”

Asked what other post-secondary institutions were doing to prepare for legalization, Friese said approaches have varied from complete campus bans to providing safe zones for smoking and vaping.

“All are also taking into account how the sale of cannabis factors into their plans, as well as how (legalization) will impact research.”

Given that Alberta’s cannabis framework prohibits smoking and vaping in areas frequented by children, one person pointed out that there are often many children on campus, especially during summer camps.

The working group has posted a website on U of A cannabis policy and will provide updates on its deliberations as information and any decisions become available. The site also contains links to a variety of resources from government, media and other agencies.

Friese added that the working group is developing educational modules on substance abuse in general for all members of the campus community.

Those who would like to contribute to the cannabis policy dialogue are asked to email cannabis@ualberta.ca with comments or questions.