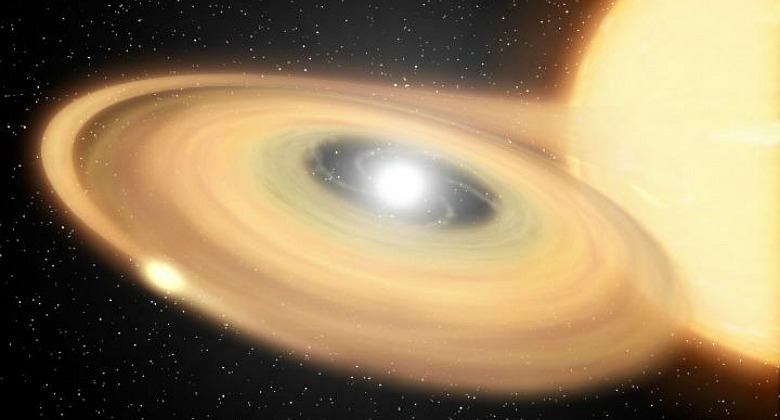 (Edmonton) A University of Alberta physicist brought together backyard astronomers and professionals to confirm the mysterious behaviour of two stars more than 300 light-years from Earth.

U of A space physics researcher Gregory Sivakoff was part of an international team that re-examined an established theory about periodic bursts of light coming from a distant binary star.

The two stars are called a binary star because they rotate around each other. The accepted theory on why this binary star, named SS Cygni, emits periodic bursts of light involves an interaction between the pair.

Sivakoff explains that one of the stars, a normal star that is a lower-mass cousin to our sun, loses bits of its outer envelope to its neighbour, a white dwarf—which is as massive as our sun, but squeezed down to the size of Earth.

“Gravity continuously draws material from the normal star’s envelope, but it is only when the material rushes toward the white dwarf that we get an outburst of light,” said Sivakoff. “We see these outbursts happen about every 35 to 65 days.”

The periodic light-flash theory of SS Cygni was developed in the early ‘80s. Sivakoff says a key factor in the theory’s calculations is the distance between Earth and SS Cygni.

In 1999, researchers with NASA’s Hubble Space Telescope came up with a larger distance from Earth to the binary star. Sivakoff says that put the established theory into question.

To settle the distance issue, Sivakoff and researchers from Australia, Britain, the Netherlands and the United States set out to remeasure the distance between Earth and the binary star.

Over two years, Sivakoff worked with a worldwide network of 180 amateur astronomers who used their optical telescopes to watch the night skies, and reported whenever SS Cygni began one of its outbursts.

The researchers then called on ground-based networks of radio telescopes to make the distance calculation. By the end of 2012, they confirmed that a smaller distance of about 370 light-years from Earth to the binary star was correct.

“That was what we need to reconfirm the theory for periodic bursts of light from SS Cygni,” said Sivakoff.

To put that distance into perspective, researchers say even though each outburst from SS Cygni travels at the speed of light, the outbursts we see today left the binary star around the time Isaac Newton was born.

Sivakoff describes the research as a big win for citizen scientists.

“We would not have been able to vindicate the theory if dedicated amateur astronomers using their own equipment hadn’t volunteered to help us,” he said.

Sivakoff is the second author of the research, which was published May 23 in the journal Science.