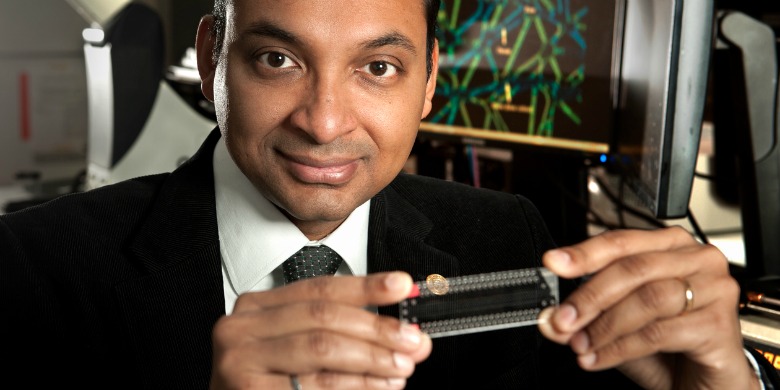 121105-sushantamitra-banner
Sushanta Mitra holds a microfluidic chip, one of the new technologies UAlberta researchers will use to ensure safe, clean water for remote communities in Canada and India. (Photo: Richard Siemens)

(Edmonton) The University of Alberta will unveil new technologies its researchers and students will use to replace inadequate water purification and monitoring equipment in remote communities in Canada and India.

The technology talk and overview of the U of A’s Water Initiative takes place Feb. 16 in Boston at the annual conference of the American Association for the Advancement of Science.

Greg Goss, executive director of the U of A's Water Initiative, will speak for the university at the AAAS event.

“The University of Alberta is developing new water purification systems such as engineered nanomaterials, and a microchip technology that reduces wait time for water content analysis from days to hours,” said Goss. “Our students and researchers will be boots on the ground in water-challenged communities, putting U of A technologies to work at home and in India.”

In Canada, U of A undergraduate and graduate students will work in communities as varied in size and location as Thorsby, 30 minutes south of Edmonton, and the hamlet of Pangnirtung, 50 kilometres south of the Arctic Circle.

In India, the U of A team will test and install next-generation water purification technology in two locations: the city of Nagpur and the remote town of Banga in Punjab.

The U of A-India collaboration is a federally funded Networks of Centres of Excellence program, called IC-IMPACTS, in which the Integrated Water Management theme is led by U of A engineering professor Sushanta Mitra.

“The initiative integrates the work of the U of A’s science faculties with the social, economic, legal and cultural research strengths of the university,” said Mitra.

Find out more about the U of A Water Initiative