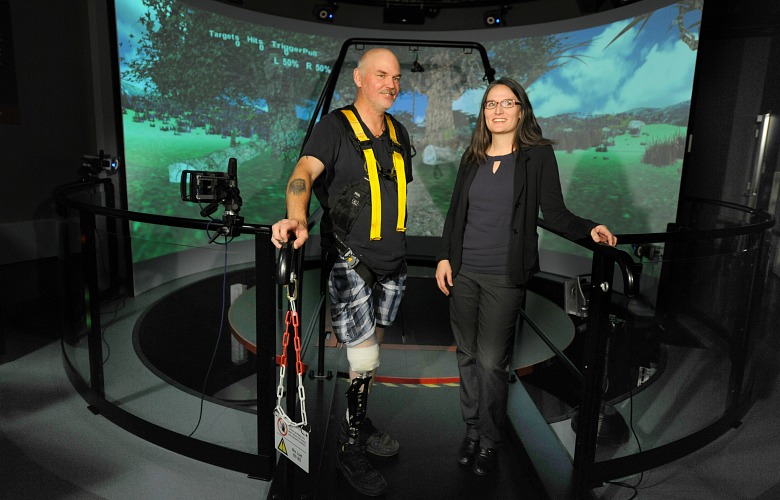 (Edmonton) Amputees learning to walk again on a prosthetic leg are regaining the skills to do so safely and confidently, thanks to virtual-reality research led by a University of Alberta clinical scientist at the Glenrose Rehabilitation Hospital.

Through sessions on the CAREN (Computer-Assisted Rehabilitation Environment)—the only clinical virtual-reality simulator of its kind in Western Canada—researchers are working to better understand the balance needs of amputees and to devise new approaches to therapy. U of A researchers are working with colleagues in Ottawa on the study.

“We’re looking at what a person with a single prosthesis usually does when he or she is thrown off balance,” says Jacqueline Hebert, a researcher in the Division of Physical Medicine and Rehabilitation, associate research chair in clinical rehabilitation in the Faculty of Rehabilitation Medicine and medical lead of the adult amputee program at the Glenrose. “We can actually study the biomechanics of how they’re walking, what their balance reactions are, then look at that and help them train better for the real world.”

As versatile as an aircraft simulator, CAREN’s twin-treadmill platform, motion hydraulics and circular surround screen can be programmed by therapists to create virtually any scenario or game imaginable as it delivers a rehab program precisely tailored to each patient’s needs. As well, sensors placed on patients are tracked by overhead cameras to give objective feedback and measure progress on gait, stride, speed, weight-shift, balance and more. A patient becomes part of the simulated environment, interacts with it and changes it through their body movements.

At the Glenrose, patients walk through virtual-reality scenarios to build skill and confidence.

“For example, we can have the CAREN system in a self-pace mode, so they can walk as fast as they’re comfortable walking,” says Hebert. “And then they suddenly have to go up inclines, down inclines or over ramps—and then we can simulate a bumpy surface where it’s like walking over rock, as the platform jolts them and bounces them around. That’s something we can’t do in therapy on a level-surface ground. And here, it’s safer than having them do it in the real world.”

Terry Lewis, one patient enrolled in the study who walks 10 kilometres a day to improve his strength and energy, says going down hills still proves particularly challenging—but the CAREN is helping.

“If it weren’t for the Glenrose and this research, I wouldn’t be able to do what I’m doing now,” says the 43-year-old Hinton resident, who lost his right leg earlier this year. “I think it’s fabulous. You’re hooked to a harness, so you’re not afraid to fall. When you come out, you still have the confidence that you can do it without falling. It’s helped me with my balance.”

Funding for CAREN came from the Government of Canada ($1.5 million) and the Government of Alberta ($250,000). Through the Courage Campaign, the Glenrose Rehabilitation Hospital Foundation also raised more than $4.5 million, which led to the 2011 opening of the Building Trades of Alberta Courage Centre and the creation of the Courage in Motion Centre, which houses the CAREN system.