Autumn Watkinson’s passionate plea for conservation wins her a spot at national competition. 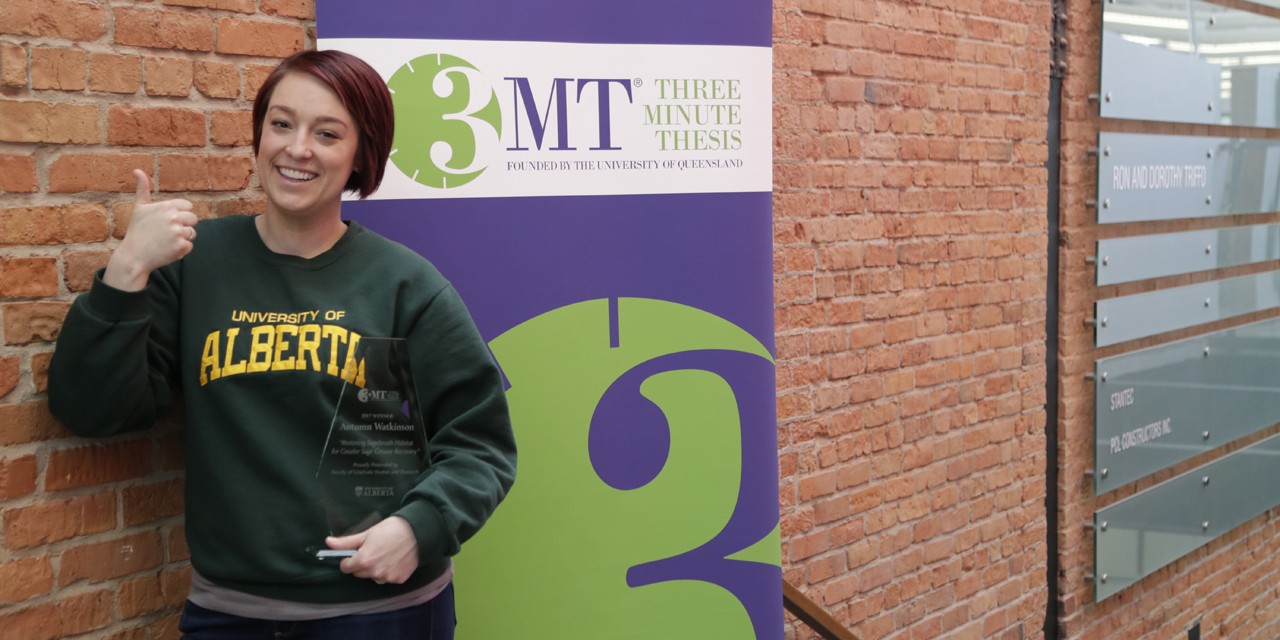 Autumn Watkinson punched her ticket to the Three Minute Thesis national finals with her plan to help save the endangered sage grouse. (Photo by Ramona Czakert Franson)

A passionate, articulate, evidence-based plea to save the endangered sage grouse earned a UAlberta PhD student a spot in the national finals of the Three Minute Thesis (3MT) competition.

Autumn Watkinson argued the formula to increase the sage grouse population is simple: increase sagebrush—the plant the bird depends on for food, shelter and nesting sites. Over the course of her PhD, she plans to restore 75 hectares of habitat. She added the formula also includes wrapping seeds in soil and nutrients to increase their chances of survival as current plant restoration methods have had low success rates.

Watkinson finished second at the 3MT Western Regionals at the University of Saskatchewan late last month, earning her a spot at the national competition.

“Our judges were impressed by her clarity in presentation and purpose,” said Renee Polziehn, a 3MT organizer and the professional development and community volunteer director in the U of A’s Faculty of Graduate Studies and Research.

Watkinson is no stranger to the 3MT competition. While completing her masters at Laurentian University in Sudbury in 2014, Watkinson won the regional competition to land a spot at the provincials.

“I guess I have been perfecting my presentation skills for awhile now and I learn something every time,” said Watkinson, who is supervised by Anne Naeth, land reclamation and restoration ecology professor in the Department of Renewable Resources.

Watkinson’s presentation, along with 10 other winning regional presentations, can be viewed on the Canadian Association for Graduate Studies website until May 26. In early June, the national panel of non-specialist judges, Tragically Hip’s Rob Baker, CBC Radio producers Nicola Luksic and Tom Howell, and entrepreneur Ian Barnes, will announce a winner and a runner-up. Voting for the People’s Choice winner is open to the public and based on the number of likes/votes a particular video has received on the 3MT page.

The 3MT is an academic competition that assists graduate students with fostering effective presentations and communication skills, founded by The University of Queensland, Australia and now held in over 350 universities across 59 countries worldwide.