Three female leaders part of project to define a new, more inclusive national vision for the next 150 years. 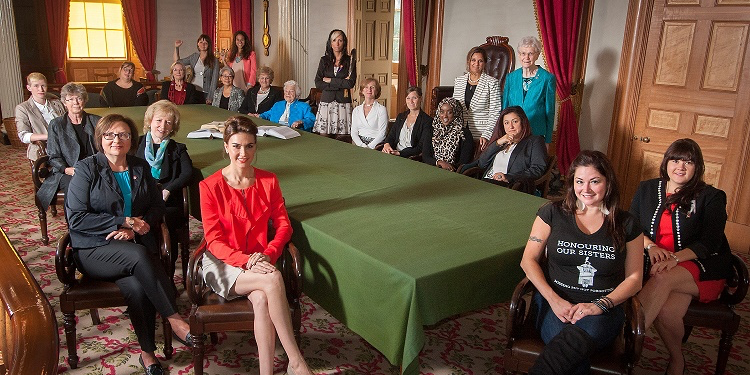 (Edmonton) Sitting in the same room where the 23 Fathers of Confederation dreamt of forming a new country 150 years ago in Charlottetown, 23 exceptional women from across Canada posed for a photo last month to celebrate a new, more inclusive national vision for the next 150 years.

The result of their deliberations is called “Charlottetown’s 2014 Declaration: A Bold Vision for the Future of Canada.” It stresses the need for women, Aboriginal Peoples and other marginalized people to play a much larger role in Canadian democracy.

The women were selected by the Women’s Network PEI to celebrate the 150th anniversary of the Charlottetown Conference, and were tasked with finding out what 23 women could do with the same opportunity given the original Fathers of Confederation.

“We believe that Canada can, and must, become a model of democracy, human rights fulfilment and women’s equality, both for ourselves and for the rest of the world,” reads the vision statement. “We are dedicated to a future that brings real equality in conditions and circumstances to women and to everyone.”

Helping to articulate that vision were three female leaders from the U of A— Margaret-Ann Armour, WISEST co-founder and dean of diversity for the Faculty of Science; Kim Campbell, former prime minister and the founding principal of the U of A’s Peter Lougheed Leadership College; and Crystal Fraser, a Gwich’in doctoral student in history.

“The discussions were intense and there were compromises made, but there was no question this group valued their differences,” said Armour. “You can see in the vision the emphasis on injustice and inclusion, and recognizing the importance of the North.”

“One hundred fifty years ago, the Charlottetown Conference consisted of 23 Caucasian men who undertook the task of uniting a vast country, with little consideration for Canada's indigenous peoples, cultural diversity or the critical role that women have played—and continue to play—in our society,” said Fraser, who has contributed to national conversations on Canada’s missing Aboriginal women, the Idle No More movement and the environment.

“As a historian—and a Gwich'in woman—it was remarkable to engage in conversations about the ongoing nature of Confederation and the future of our nation.”

Armour, Campbell and Fraser joined a group of women from various backgrounds, including seven recipients of the Order of Canada, four recipients of the Queen Elizabeth II Diamond Jubilee Medal, four PhDs, 12 authors, a spoken-word artist, a rocket scientist, a former mayor, a former prime minister and a former premier.

After meeting for a few days in late September, the group produced a document with 16 points, addressing everything from the need for a new, more inclusive constitutional agreement to recognizing “the specific race-based challenges faced by communities of colour,” to protecting the environment in the face of climate change.

Armour said she worked mainly on the paragraph on access to education: “Accessible education is a right to allow everyone throughout their lives to achieve their full potential in any fields that they choose. We boldly suggest a society that supports lifelong learning and invests in creative research and development that will advance scientific knowledge to positively benefit people in Canada.”

The 23 women also contributed essays to a companion anthology called A Bold Vision, available for purchase at the project’s website. Armour’s chapter discusses the need for more “science with a social conscience,” Fraser’s for “social quality and respect” and Campbell’s for the “full political and social empowerment of women.”

Now that the vision has been released, says Armour, the next step will be for the group to meet again and figure out how to implement it.

“I realized we are very lucky,” says Armour.  “We come from a country where we could have a vision like this, where we can have human rights for everybody, we can have education for all, and health care for all.

“My hope is that we can take that model and use it as decision-making in the country.”