The beauty of this campus is the depth of expertise—any skill on Earth, you can find here. If the China Institute were a stand-alone think tank, we wouldn't be able to do it.

UAlberta's China Institute has the goods on Chinese investment in Canada

Institute taps depth of expertise on campus to develop most comprehensive database of Chinese investments in Canada. 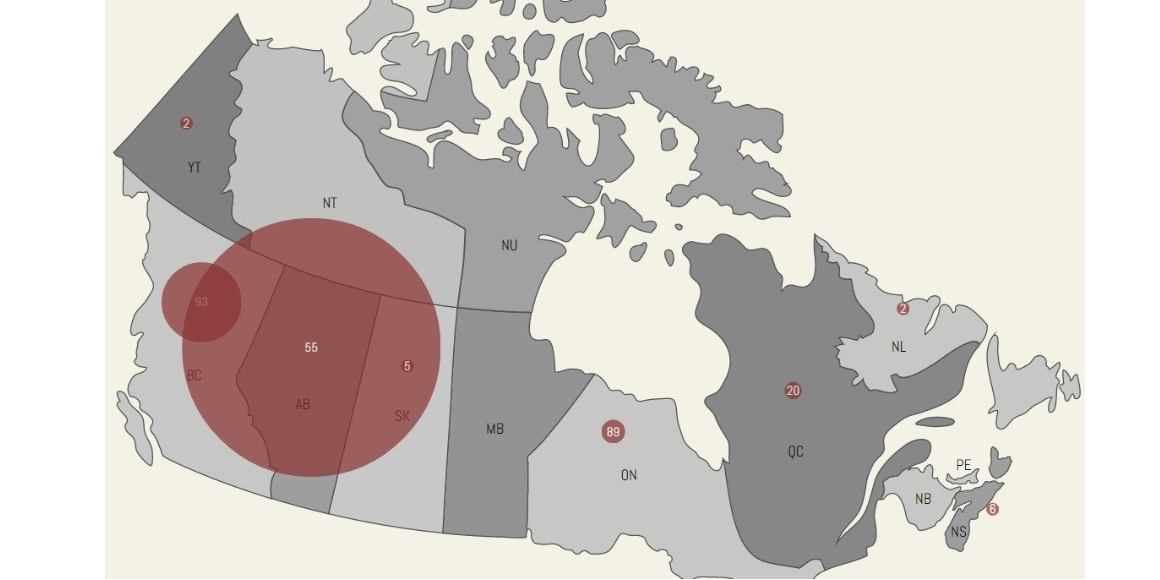 This infographic shows the relative amount and number of Chinese investments in Canada by province. Alberta accounts for about 73 per cent of the national total of some $52 billion in investments over the past 20 years. (Image courtesy China Institute)

(Edmonton) The University of Alberta is now home to the most comprehensive database of Chinese investments in Canada.

Conceived and hosted by the U of A’s China Institute, the China-Canada Investment Tracker details more than 250 acquisitions, equity investments and joint ventures worth $52 billion over the past 20 years, concentrated mainly in energy and mining.

The tracker was created because existing figures on Chinese investment—those issued by Statistics Canada and other government agencies—were “ridiculously low,” says Gordon Houlden, director of the China Institute. StatsCan recently listed total Chinese investment in Canada at about $12 billion, he says. Even during Prime Minister Stephen Harper’s trip to China last month, the official figure floated in the media was $20 billion in two-way investment—less than half of the actual total.

"Our China Institute charter says we should work to improve understanding between Alberta and China, and Canada and China, and one very hot topic of discussion in this country is Chinese investment,” says Houlden. “The problem I found was that no one had the facts, not even the government. And before you can increase understanding, you need to have the facts.”

One factor skewing government accounting was the inclusion of only investment arriving in Canada directly from China, not the considerable funds typically rerouted through banks in London, Luxembourg or the Cayman Islands.

Other databases, such as the one maintained by the U.S.-based Heritage Foundation, track only large investments, says Houlden, only those amounting to US$100 million or more. It took the sophisticated search skills of doctoral candidates in the U of A’s Department of Economics to come up with the complex algorithms and procedures to chase smaller investments.

"It’s like finding a needle in a haystack,” says Houlden. “It's the smaller deals of a few million here and there that are toughest to find. But the beauty of this campus is the depth of expertise—any skill on Earth, you can find here. If the China Institute were a stand-alone think tank, we wouldn't be able to do it.”

And though Houlden believes the new database—which also tracks type of investment, target and acquiring companies, ownership stake acquired, value, sector, and location for investment transactions—accounts for most of China’s investments in Canada, he says there may yet be more to find.

It’s still early days to discern much in the way of trends from the data, but there are nonetheless striking key findings that are immediately apparent. For example, of that $52 billion in total, $45 billion arrived in just the last five years, perhaps as a result of China’s ongoing reforms of its outward investment regulations.

"The trend I'm beginning to see is that the Chinese government is beginning to eliminate advantages held by state-owned enterprises, which had much easier access to capital and a much simpler process to gain approval for investments abroad,” says Houlden.

“That playing field is being levelled, so that private industry—which is the majority of industry now in China—will have much easier access to the foreign currency and approval of government necessary to invest abroad." State-owned enterprises currently account for 90 per cent of Chinese investment in Canada.

"I'm of the opinion that we need capital in this country,” to fuel economic development, says Houlden. “Four million Albertans, 35 million Canadians, cannot supply the necessary capital. The federal government estimates we need about $650 billion just to develop the resource sector, and we just don't have that—there aren't enough of us."

Another emerging trend is diversification, says Houlden, or at least a slight move away from energy. "I'd be surprised if we don't see investment growing in the tourism sector in Alberta and Canada. Energy and mining will continue to dominate, but the trend lines will see movement to the private sector and out of just the minerals and raw materials.

"I believe we'll see Chinese manufacturing in both Canada and the United States. It seems incredible, but stranger things have happened."

And although that $52-billion total is far more than previously estimated, it is still far below Chinese investment in the United States and Europe, says Houlden. But that may change as more private capital leaves China.

The China-Canada Investment Tracker was launched only a few weeks ago but has already attracted robust interest. The primary clients so far have been the federal and provincial governments, followed by media and the financial sector.

For an annual fee, subscribers to the database have access to the full details of each investment transaction as well as regular updates on Chinese investment activity in Canada through the investment tracker website. Subscribers will also receive a discount when registering for the China Institute’s conferences. On May 8, 2015, the institute will host its fifth annual National Forum on Chinese Investment in Canada in Toronto.

Established in 2005, the China Institute at the University of Alberta focuses on the study of contemporary China, including Chinese energy policy, politics, economy, social issues, culture and Canada-China relations.

UAlberta's China Institute has the goods on Chinese investment in Canada