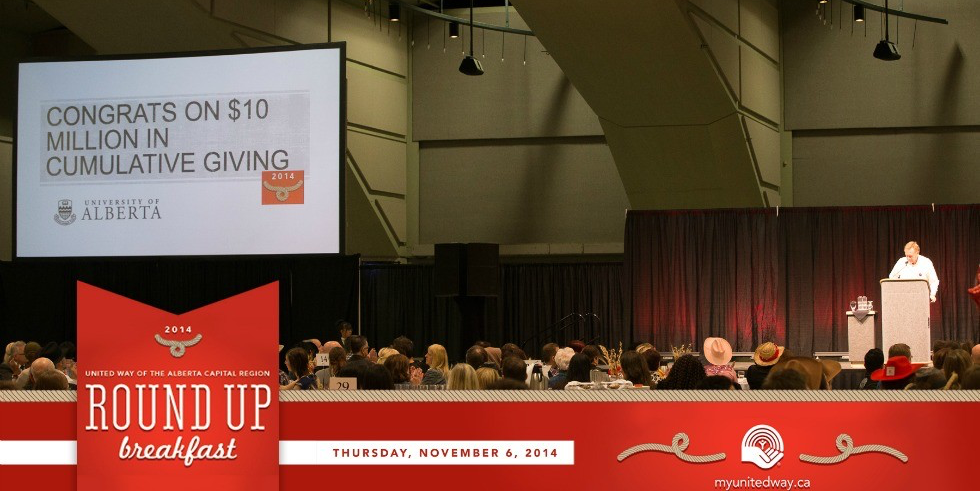 UAlberta board chair Doug Goss speaks at the United Way breakfast Nov. 6, where the university community was honoured for reaching $10 million in donations over the last 30 years.

(Edmonton) As the University of Alberta’s United Way campaign begins to wind down for 2014, there are millions of reasons to celebrate.

This year’s fundraising campaign saw the total cumulative U of A donations to the United Way over the past three decades reach the $10-million mark—a milestone that the campus community can take pride in, said U of A board chair Doug Goss.

For its more than 30 years of fundraising efforts, the U of A was honoured Nov. 6 by the United Way and will also be recognized for its community enrichment efforts, by the Association of Fundraising Professionals on National Philanthropy Day Nov. 14.

“The University of Alberta holds very dear the principle of community engagement, and reaching this significant milestone reflects the commitment the U of A campus community has to making life better for less-fortunate citizens of the Capital Region,” said Goss, who attended the United Way’s annual breakfast on behalf of the university.

“Our founding president, Henry Marshall Tory, said ‘The uplifting of the whole people shall be its final goal.’ We made that promise more than 100 years ago and we continue to live that promise today by giving back to the communities we serve,” Goss said.

The U of A’s role is not only to educate and nurture future leaders, “but also to grow the next generation of global citizens, who will in their own ways contribute to a better society,” he added.

“We know the world is not perfect. We know that issues like poverty cannot be solved in isolation, and for that reason the U of A partners with organizations who share our values and vision, like the city, province and United Way, to tackle the big issues such as poverty.”

During the 2013 campaign alone, the U of A community raised more than half a million dollars. This year it is looking to match that significant achievement and in doing so, will look ahead to building on the next $10 million. Funds raised went to such programs as the drop-in program for low-income seniors at Operation Friendship, mentoring programs at Boys and Girls Clubs Big Brothers Big Sisters Society of Edmonton and counselling for youth and families on gender issues at the U of A’s own Institute for Sexual Minority Studies and Services.

“We thank the university community for its continuing generosity. However, there is more work to be done. There are 120,000 people—37,000 of them children—living in poverty in the Capital Region, and as an integral community partner, we are committed to helping solve the problem.”

For United Way supporters who love the thrill of the chase (and want to do some early Christmas shopping), the Campus Auction Market is one of the final ways that donors can give to the 2014 campaign.

The U of A has teamed with MacEwan University and NAIT to offer fabulous items up for bids online from Nov. 17 to 21. The lineup of U of A offerings includes a private night in the U of A Observatory, a viewing of space rocks and other geological treasures in the university’s meteorite collection, a tour of the Dino Lab and a one-of-a-kind piece of art from the Faculty of Arts.

As well, NAIT is offering a private photography portrait session, a wine and food pairing for six at Ernest’s, handcrafted desks and iron plant stands. A pair of Edmonton Oilers custom-made Jofa hockey gloves autographed by Wayne Gretzky is being offered by MacEwan University, complete with a certificate of authenticity.