Travelling exhibition of hundreds of letters makes stop in Edmonton this week. 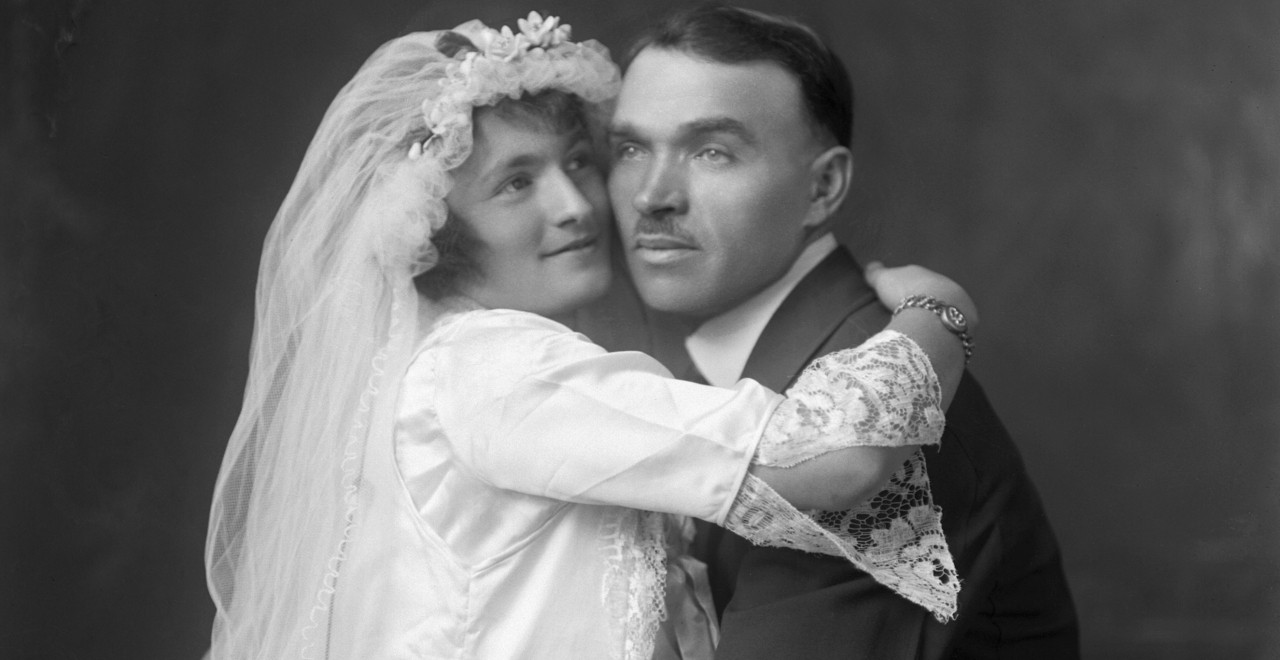 A young Ukrainian couple embrace for a wedding photo taken in Crowsnest Pass, Alberta, circa 1915. Hundreds of photographs, memoirs and love letters on display in Edmonton this week offer a rare glimpse into the lives of early-20th-century Ukrainian immigrants in Canada. (Photo courtesy Kule Centre for for Ukrainian and Canadian Folklore)

“There is no room for me in this wide land, only bitter tears and misery,” lamented young Ukrainian immigrant Wasyl Kuryliw, writing home to his high-school sweetheart in the 1930s from a nickel mine in Sudbury, Ontario.

“Give me hope, or I will be lost,” he wrote during an eight-year, long-distance courtship before Anna Zabolotna finally joined him in Canada to begin a 65-year marriage.

The love letter provides a poignant window on the lives of Ukrainian immigrants in the early 20th century, and insight into a culture that relied heavily on regular exchange with the homeland.

To explore how this fledgling culture “flourished in both urban and rural settings,” the University of Alberta’s Kule Centre for Ukrainian and Canadian Folklore has collected hundreds of such letters that crossed the pond between Ukraine and Canada almost a hundred years ago.

The collection has been curated for a travelling exhibit called Love Letters From the Past: Courtship, Companionship and Family in the Ukrainian Canadian Community, showing this week in Edmonton’s Southgate Mall.

Displayed in English, Ukrainian and French, the exhibit is designed for a multi-generational audience, said Jelena Pogosjan, director of the Kule Folklore Centre. It will soon be supported by a website and full-colour exhibit catalogue.

"It's touching, sincere and exposes a different layer of culture,” she said. “It’s perhaps the most democratic way to approach it.”

Since last May, the exhibit has travelled to venues throughout the country—including the Bloor West Village Toronto Ukrainian Festival last summer, which attracted more than 1.5 million people.

It will soon open at the Shevchenko Museum in Toronto, then show in Halifax, possibly returning this summer to Edmonton’s Ukrainian Village.

There are nine themes or stories around which the letters are clustered, said Pogosjan, such as the post office as a community gathering place, the mail-order bride, love and the Ukrainian folk song, and letters by Ukrainians in Canadian internment camps during the First World War.

In addition to the letters themselves, the exhibit draws on memoirs, family photographs and various other publications around wider letter-writing culture.

"Letters were an important vehicle for how to survive,” said Pogosjan. “Newspapers of the time, as well as calendars and almanacs, were full of discussions about letters and how to write them. There was a huge letter-writing culture."

A popular publication of the time was the 1913 Guide for Lovers, which included examples of love letters with an extended section on love and courtship etiquette.

The book has advice on how to to start a romantic relationship, where to meet for a first date, how to proceed from courtship to marriage, and other tips for keeping romance alive, write the curators in the exhibit catalogue.

“For Ukrainians in Canada, the search for love manifested itself in many different ways,” they write. “Some chose to leave their loved ones—wives and fiancées—in the Old Country, so that they could build a new life in Canada and earn enough money to later reunite with family.”

Others, including eligible bachelors from the Ukrainian-Canadian community, wrote back home in search of prospective wives in Ukraine.

“And eligible young Ukrainian women, who dreamed of immigrating to Canada, often forwarded their photographs to family and friends, hoping to find a suitor in the New World.”

Pogosjan noted a good portion of the centre’s letter collection may never have seen the light of day, because many were seized by the KGB on suspicion of conveying coded messages about the Soviet regime.

But a few years ago, she said, secret service archives from that time were opened to the public, and to take advantage of this rich new source, Pogosjan sent a graduate to Kiev to bring back what she could find.

The student returned with 400 letters, as well as KGB instructions on how to censor a letter and detect coded messages. This summer Pogosjan will send another student to collect more, she said.

Pogosjan added the exhibit has encouraged descendants of Ukrainian immigrants to donate letters from their personal archives.

"People may not have seen them as important for historical scholarship; they will say, 'I didn't think you would be able to use these for historical research, but now I see you need them.'"

Love Letters From the Past continues until Friday at Southgate Centre, 5015 111 Street.