Holding your breath above 5,000 metres may also interfere with sleep, new research shows. 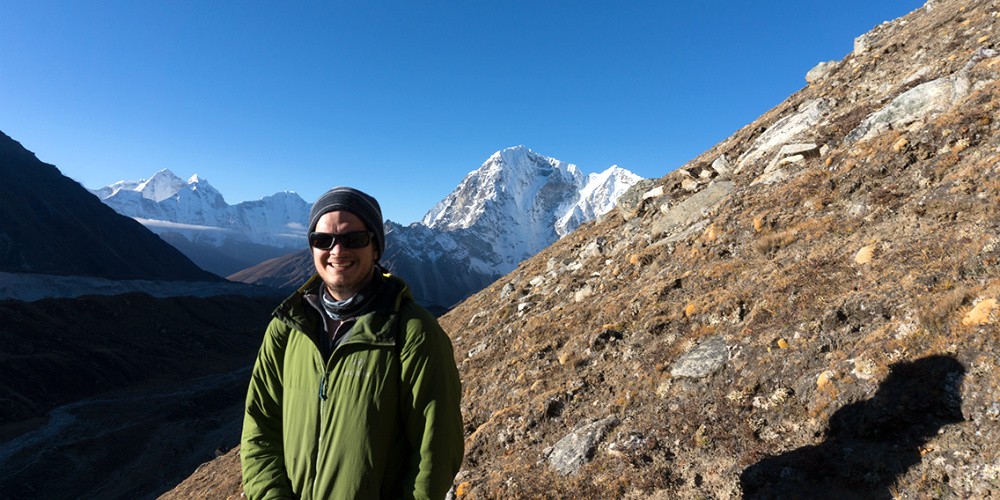 Stephen Busch in the Himalayas during a research expedition in October 2016. Using data collected during the trip, Busch found that mountain climbers who unconsciously hold their breath at high altitudes may suffer heart arrythmias and sleep apnea that could be harmful to their health. (Photo courtesy Craig Steinback)

Climbing at high altitude may increase your risk of developing acute heart conditions, according to new physiology research out of the University of Alberta.

Stephen Busch, a researcher in the Faculty of Kinesiology, Sport, and Recreation, recently published findings that show the development of periodic arrhythmic episodes at an altitude of 5,050 metres when people hold their breath.

“We focused on breath holding because it is something that we all do on a regular basis without even thinking about it,” said Busch. “When we’re in a pro-arrhythmia environment, like 5,050 metres up Mount Everest, this simple, unconscious action can have major health implications.”

At sea level, sympathetic and parasympathetic activity works in a reciprocal fashion on the heart—when one increases, the other decreases, and vice versa. This allows for precise control of the heart to numerous stressors to which we’re unconsciously exposed.

But breath holding is a unique stressor that causes an increase in both sympathetic and parasympathetic activity. Busch said he believes the conflict is triggered by a specialized group of cells, known as peripheral chemoreceptors, that monitor chemical changes in our blood. In this case, the chemical change at altitude is a lack of oxygen.

To better understand how breath holding affects the sympathetic nervous system, Busch tested the heart rate response in 14 lowlanders both at sea level and at an elevation of 5,050 metres, and eight Nepalese Sherpa—an ethnic group found mainly in the Himalayas who are acclimatized to high altitudes—at 5,050 metres.

The results showed that breath holding at sea level did not produce abnormal heart responses. However, after spending several days at high altitude, lowlanders developed arrhythmias when they held their breath.

Busch hypothesized that the arrhythmias were due to the chemoreceptors becoming sensitive over time at high altitude, causing them to fire more often.

Busch tested this hypothesis by giving seven of the 14 lowlanders additional oxygen immediately prior to a secondary breath hold at high altitude, working under the assumption that supplementary oxygen would stop the chemoreceptors from activating, thereby reducing the stress to the heart during breath holding.

The abnormal heart responses vanished with the additional oxygen, returning lowlanders back to their sea-level values.

“This indicates that long-term chemoreceptor activation at altitude may promote a ‘pro-arrhythmia’ environment during stressful periods through a conflict between the sympathetic and parasympathetic nervous systems,” said Busch.

He noted the Sherpas did not show any abnormal heart responses to breath holding at altitude. He believes this is a result of evolutionary adaptations that allow them to tolerate altitude better than acclimatizing climbers.

Busch suggests the condition may also cause irregular sleep patterns, although further research is needed.

“When you’re climbing a mountain, the last thing you need is poor performance due to lack of sleep,” said Busch, who added he thinks the breath holds may translate to other altitude-related conditions such as Cheyne-Stokes respiration, a condition similar to sleep apnea.

“The lack of sleep climbers experience because of the apneas increases performance risks while placing unnecessary stress on the body,” said Busch. “This is a major concern for climbers who want to summit big mountains like Everest.”

Busch and colleagues are now working on trying to replicate the results they saw at high altitude in the Neurovascular Health Lab at the U of A. By doing so, they can use the same testing they implemented as part of this research project to test a climber’s sensitivity to altitude before actually climbing in the mountains. This may help climbers be more informed about their risk of developing arrhythmias, which is especially important with climbers who have pre-existing heart conditions. Currently, no predictive tests exist.

The study, “Chemoreflex Mediated Arrhythmia During Apnea at 5050m in Low but not High Altitude Natives” was published last December in the Journal of Applied Physiology. Data were collected by Busch and associate professor Craig Steinback as part of a research excursion to the Himalayas in October 2016.