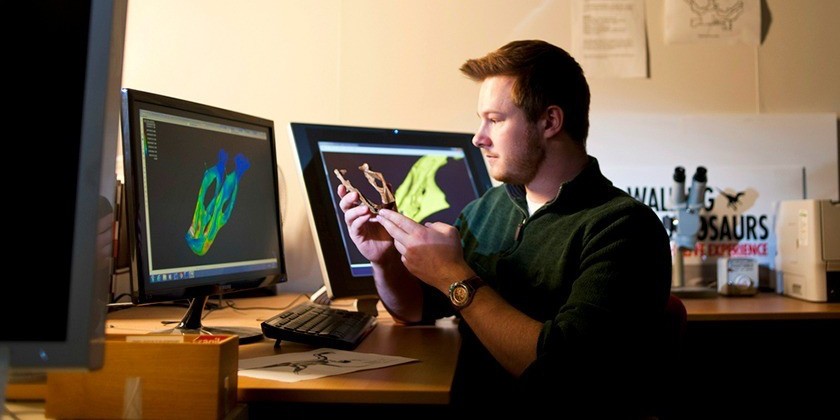 (Edmonton) Greg Funston has been dreaming about dinosaurs for a long time.

Originally from Yellowknife, N.W.T., Funston was first captivated by dinosaurs when he was three. This early passion brought him to a science camp in Drumheller, Alta., where he encountered first-hand the richness of Alberta’s paleontological history and its opportunities for discovery. Now an alumnus of the University of Alberta’s elite paleontology program, he has already been published in the Canadian Journal of Earth Sciences for research he did as an undergraduate student with the U of A’s renowned dino hunter, Phil Currie.

Funston’s research started in a required course for honours paleontology students, BIOL 499. “I was very excited to be doing research, especially with someone like Dr. Currie,” says Funston. “Phil is a great mentor: he really gives you free rein over your own project, but he has a wealth of knowledge to deal with any challenges you might face.”

After an initial meeting with Currie to discuss potential research options, Funston took the lead on a project appealing to his interests—a mysteriously toothless dinosaur known as Chirostenotes.

“Toothlessness is a rare phenomenon in dinosaurs,” he explains. “It actually occurs in just three groups: ornithomimids, oviraptorosaurs—my study group—and birds.” Even without a complete skull or skeleton of Chirostenotes, Funston was able to shed new light on the dinosaur’s diet and eating habits.

“We'd assumed that they were doing something odd after losing their teeth, and most people just guessed that they were herbivores,” notes Funston. The paper, however, suggests that Chirostenotes was likely an omnivore, eating both plants and small animals. This discovery will shed light on evolutionary relationships among oviraptorosaurs, which descended from meat-eating dinosaurs.

These days Funston is continuing his research with Currie at the U of A, now as a master’s student. His words of advice for anyone interested in undergraduate research? Get involved as soon as you can.

“I really enjoyed the whole process. Research isn't for everyone, but it's what I'd like to do in the future, and finally getting a shot made me certain of that.”

Funston's research will be featured in the upcoming U of A Museums exhibition Discovering Dinosaurs, beginning Sept. 18 at Enterprise Square Galleries.