Undergrads experience the rewards of research 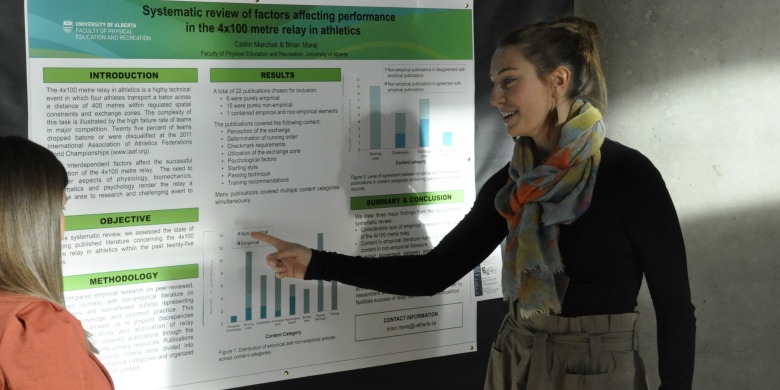 (Edmonton) One look around the Centennial Centre for Interdisciplinary Science on Nov. 15 and it was easy to tell this was not your professor’s research symposium.

About 90 students, representing almost every University of Alberta campus and faculty, presented models, videos and posters of their research or submitted research proposals. The event, organized by the Students’ Union, gave undergrads an opportunity to showcase work they were inspired to undertake as U of A students. The event was a showcase of the institution’s commitment to learning and discovery.

Some followed personal interests, such as Evguenia Volboeva, who combined her passion for drama and interest in her native Russia while exploring the notion of futurism in that country’s post-revolution theatre. Others, such as Dominica Harrison, explored a deeper path into academia. Harrison spent part of the summer mapping plant species in Brazilian forests using the thermal infrared spectrum. It’s not something she expected to do as an undergraduate, but she says the opportunity was invaluable.

“I love being out in the field and collecting data,” she said. “It was quite the experience, especially as an undergrad. It was great.”

Family advice not so far-fetched after all

As a second-year student, Caitlin Marchak (now a fourth-year student in kinesiology) laughed when her older sister urged her to explore research opportunities. A former athlete, Marchak found that her preconceived notions of research could not have been further off the mark. Her own project, a review of empirical and non-empirical data on factors affecting performance in the 4x100-metre relay, drew on her interest in coaching. Having now spent time as both a participant and a researcher, she has a new perspective on the efficacy of the two groups working together more closely and communicating more effectively.

“It’s so broad and much more engaging than I ever thought it was,” she said. “Research is for everyone. Whatever you’re interested in, there’s a way to do research about that.”

“Run with the questions that keep you up at night”

Dustin Chelen, Students’ Union vice-president (academic), says the event demonstrates the abilities undergraduate students have. He sees the symposium as part of a broader institutional plan to incorporate research methods into the undergraduate curriculum. Having access to leading researchers, and being able to work with and receive guidance and feedback from these professors, is one of the advantages of being at the U of A. “There aren’t a lot of events that the Students’ Union throws that really focus on how incredible it is to be a University of Alberta student, and I think this is it,” he said.

Often, he says, the complaint that is heard is on a lack of focus on the teaching aspect of universities. Events like this are an opportunity to view that argument from another perspective. This event demonstrates the impact research has on the student learning experience, and offers a venue and a forum for students to demonstrate and articulate how these opportunities have changed their lives. Chelen echoes Marchak’s thoughts on encouraging undergrads to explore their own research opportunities.

“Run with those burning ideas for a summer,” he said. “Apply for a research award; the Undergraduate Research Initiative can help students find funding.

“While you’re young, take the time to run with the questions that keep you up at night. Now is the best time to do that, and the University of Alberta can help students explore those questions.”

Undergrads experience the rewards of research