University of Alberta researchers are imagining what society will look like after hydrocarbons are replaced with renewable energy. 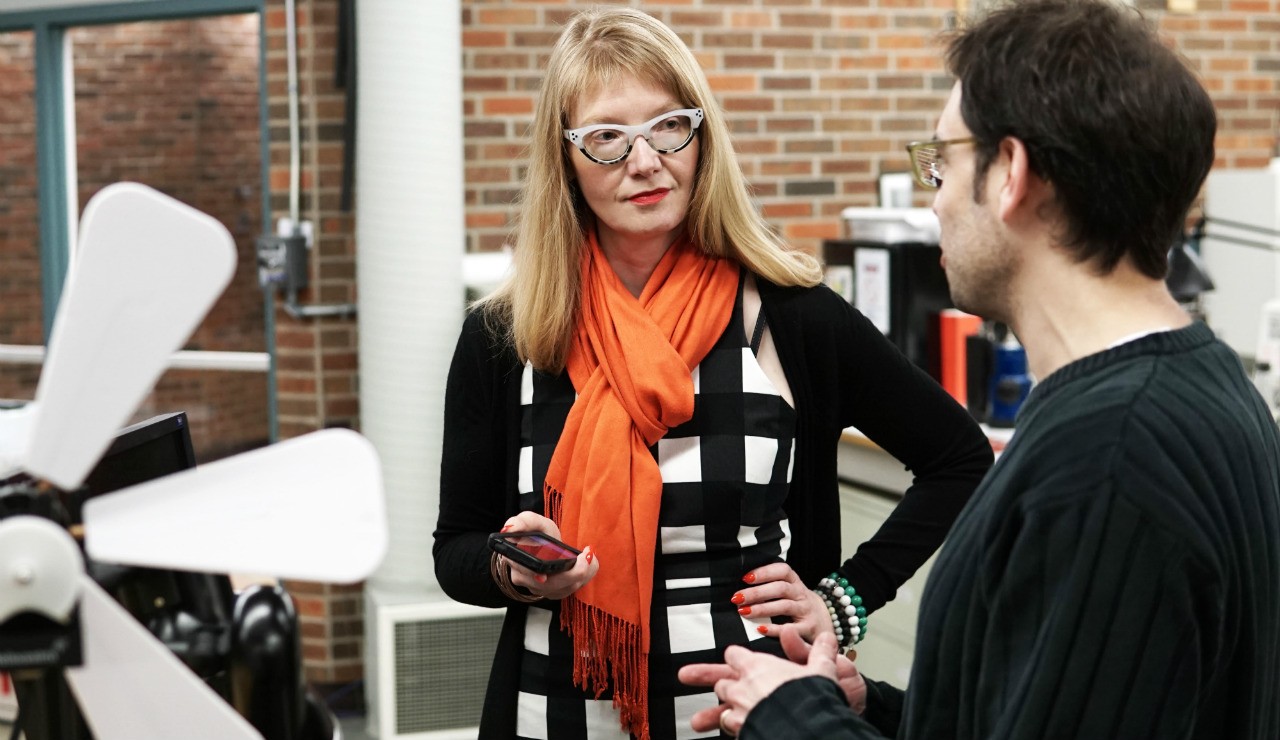 Imagine waking up tomorrow in a world that doesn’t depend on oil.

That might seem far-fetched, but as engineers and scientists come up with new ways to harness renewable energy, those new sources of energy may soon shape the way our societies function and how we live our daily lives.

“We’re going to stop depending on oil long before we run out of it, so we really need to exercise our imaginations about what other futures are possible," explains University of Alberta associate professor Sheena Wilson, who heads the Future Energy Systems energy humanities theme.

”Right now we live in sprawling urban communities with long commutes—we drive everywhere. If we don't have access to such powerful energy sources, and our lives aren't organized around auto-mobility, the shape of our cities looks very different. We need to think about communities we're shaping through the energy systems we're designing.”

Decentralization of energy through the development of wind, solar, biofuels and geothermal could mean that communities no longer need to be centralized. Societal power structures defined by those who presently control energy and wealth could also fundamentally change.

If someone living in a remote location unconnected from the grid could have the same reliable energy as someone living in an urban centre, would people need to live together in cities at all? Possibly, but maybe for entirely different reasons.

"Our communities might need to be organized in entirely new ways—around social and environmental sustainability, instead of around the easy flow of traffic and consumer goods," said Wilson.

“We can ask ourselves all sorts of questions about why we live the way we live—and if changing the way we access energy will change everything,” she added.

The U of A cultural studies and media expert based in Campus Saint-Jean has been exploring the social aspect of the energy future for years. In 2011 she co-founded the Petrocultures Research Group to explore humanity’s next step after the oil-dominated economy. The group has generated a number of interdisciplinary projects and expanded its membership internationally. One of its research initiatives, After Oil: Explorations and Experiments in the Future of Energy, Culture and Society, explores “the social and cultural implications of oil and energy.”

When the Future Energy Systems research initiative launched at the end of 2016, Wilson was asked to develop the energy humanities theme, which has brought a group of interdisciplinary humanities scholars into the program to work closely with scientists, engineers and social scientists.

This approach is unique, and when the UN Intergovernmental Panel on Climate Change (IPCC) conference came to Edmonton earlier this month, Wilson and her group were invited to make a mainstage presentation about the energy humanities’ program and how it is now imagining possible futures based on the latest energy research.

“We’re not just hearing about the next big thing in energy third-hand—we get the chance to talk directly to Canada’s leading energy researchers, see what’s too new to have hit the headlines and provide input to IPCC reports and recommendations that will influence policy at all levels of government,” said Wilson.

"We're trying to bring together people from diverse backgrounds and disciplines to inform the thinking we're all doing as we work toward other possible futures,” said Wilson.

The fine arts will also play a role in imagining those futures. A seven-year Future Energy Systems project called Speculative Energy Futures—collaboratively led with art and design historian Natalie Loveless under a larger research initiative called Just Powers, for which Wilson is the research lead—will produce a large-scale, evidence-based exhibition and a series of publications to provide visual perspectives on the social and cultural impacts of energy transition.

Another Just Powers visual project called iDoc has been capturing the work of Future Energy Systems on video. In addition to filming interviews and lab footage with U of A researchers, the project will include policy-makers and other players engaged with energy transition in Alberta more widely.

This research will be archived for posterity by University of Alberta Libraries, and made available through open access in a range of formats on the web and in public screenings so it can inform public discussions about the possibilities and limits of energy transition and its politics.

"Fifty years from now, people might be explaining to their grandkids what it was like to have their houses connected to a central power grid—or to ‘fill up’ their cars,” Wilson said. “We want them to understand why we made the decisions we did, and what we were thinking.”

—With files from Geoff McMaster