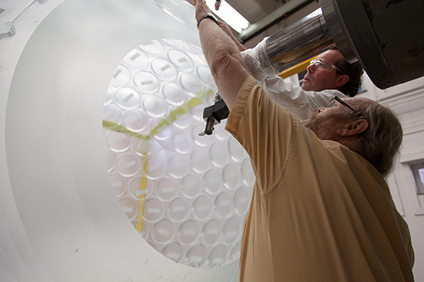 Aksel Hallin and machinist Antonio Vinagreiro with the DEAP neutrino detection vessel. The dark matter detector was designed and built at the University of Alberta. (Photo: Sean Buchanan)
“

Being involved in this kind of physics means we are playing as a big-league player. Canada and the University of Alberta are doing this cutting-edge fundamental physics at the highest level.

Fresh off his win of the 2015 Nobel Prize in physics, Sudbury Neutrino Observatory (SNO) collaborator Art McDonald is visiting the U of A next week to share his expertise in the science behind some of the universe's most mysterious particles. 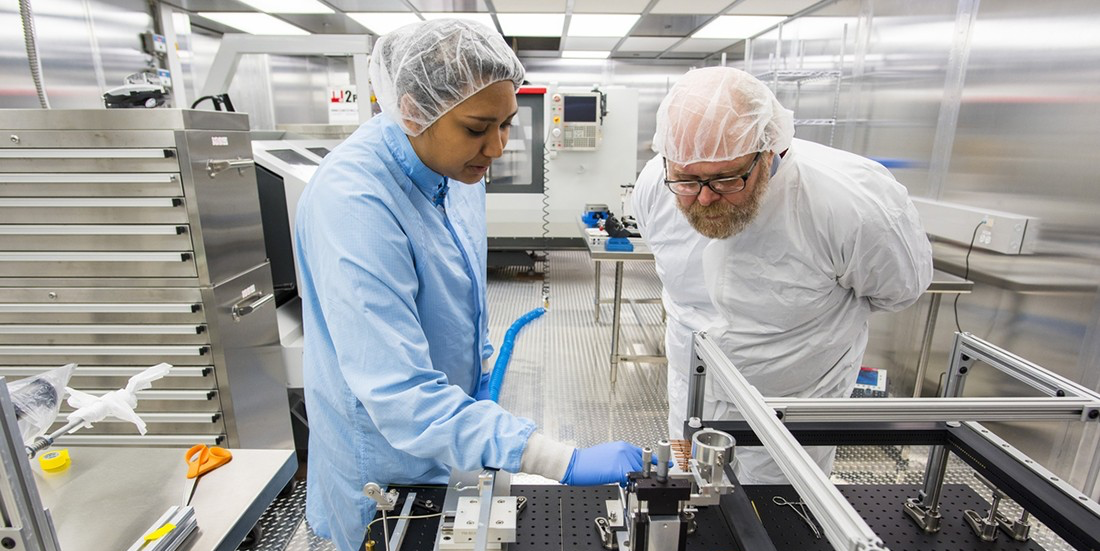 UAlberta physicists including Aksel Hallin (right) have been longtime collaborators with Art McDonald for his Nobel Prize-winning research at the Sudbury Neutrino Observatory.

Thanks in large part to the 2015 Nobel Prize in Physics for the discovery of neutrino oscillations demonstrating that neutrinos have mass, more people than ever are gaining an interest in fundamental questions of physics. To further communicate the science behind neutrinos, Nobel Laureate Art McDonald is giving a free public lecture at the University of Alberta in Edmonton on Monday, March 21 at 7:30 p.m.

“Neutrinos have a substantial influence on how our universe has evolved,” says McDonald, who was awarded the Nobel Prize in late 2015 for his leading role in the Sudbury Neutrino Observatory collaboration (SNO), dedicated to unravelling the mysteries of these characteristically enigmatic particles. “They are the basic building blocks of physics. There has been a big increase in scientists’ interest in particle physics and neutrinos in the last 20 years, and our results at SNO had some significant influence on that.

“It is exciting to have young students in Canada understand that it is possible to perform experiments here and comprehend our universe in much more detail at a level that is really world-class,” says McDonald. “This has been a major collaboration across Canada involving institutions like the University of Alberta as well as collaborators in the U.S. and U.K. Everyone involved in the collaboration is very willing to share our research with the public because it is a Canadian success story.”

In addition to engaging the audience in a conversation about neutrinos, McDonald’s other major purpose is to spotlight the significant role U of A researchers played in the success of the experiment, which ultimately led to the Nobel Prize. In addition to his relationships with collaborators here, McDonald received an honorary degree from the U of A in 2011.

“The University of Alberta is continuing to participate in really cutting-edge experiments of a very fundamental nature here at SNOLab,” says McDonald. “The experiments that people from the U of A are pursuing will not only address some of the most fundamental remaining questions associated with neutrinos but will also look for dark matter particles, which we know make up about 26 per cent of the universe but which we think are made of a different type of matter than we are. It is a very exciting time.”

U of A researchers continue to work with McDonald and the other SNO collaborators on tackling several other major experiments, leading to the next level of understanding of not only neutrinos via the SNO+ experiment, but also dark matter through the DEAP 3600 experiment.

“One of Art’s hallmarks is that he works very hard and continuously on building scientific collaboration,” says one of McDonald’s longtime collaborators, Aksel Hallin, physics professor at the U of A. “Art always puts that team front and centre. You have to work collectively as a team functioning at the highest level if you are going to be in this field. You have so many subsystems that have to function. Everybody’s piece has to work to get a result.”

And get results they did. Over the 15 years of the SNO experiment, 260 authors contributed—many of them students. But Nobel Prize aside, why should the public pay attention to neutrinos anyway?

“Neutrinos pass through everything and give us a probe into physics that we cannot see anywhere else,” says Hallin. “These are the only things we can use to look straight into the core of the sun and Earth. Understanding the universe and how things work has totally changed our lives,” he says with specific reference to the information revolution. “It has turned the world on its head. The things we can do are so mind-boggling in a historical context.”

Aksel Hallin and machinist Antonio Vinagreiro with the DEAP neutrino detection vessel. The dark matter detector was designed and built at the University of Alberta. (Photo: Sean Buchanan)

Hallin recounts his own journey into understanding neutrinos, which took him from Princeton to Queen’s to join the SNO experiment, and ultimately to the U of A where he has been the Canada Research Chair in Astroparticle Physics since 2007.

“I’ve always been interested in fundamental physics. Physicists predicted that three per cent of the energy of the sun should come in the form of neutrinos. We saw that it was one per cent. So where was this missing two per cent? That mystery existed from the 1970s until the SNO experiment ran. We knew there had to be a result that would either dramatically change our understanding of the way stars worked—the sun is our typical star—or we were going to understand neutrinos. We had a great experiment.”

With access to experiments like the original SNO, SNO+—the search for a process to demonstrate that neutrinos are their own antiparticle with the goal of measuring neutrino mass—and DEAP 3600—the large dark matter detector looking for the matter in the galaxy that provides the gravity that holds stars in their orbit—U of A students are working side by side with colleagues from Oxford, Berkeley, Queen’s and Pennsylvania, to name a few of what Hallin acknowledges as the world’s top universities.

“It provides something to students that they can’t get anywhere else: that broader perspective and interaction and realization that they can compete. With SNOLab, Canada is competing, and the U of A makes up a significant fraction of that experiment. Being involved in this kind of physics means we are playing as a big-league player. Canada and the University of Alberta are doing this cutting-edge fundamental physics at the highest level.”

A limited number of tickets are still available for McDonald’s talk, “Understanding Neutrinos,” on Monday, March 21 at 7:30 p.m. in 1-440 in the Centennial Centre for Interdisciplinary Science on the U of A North Campus at