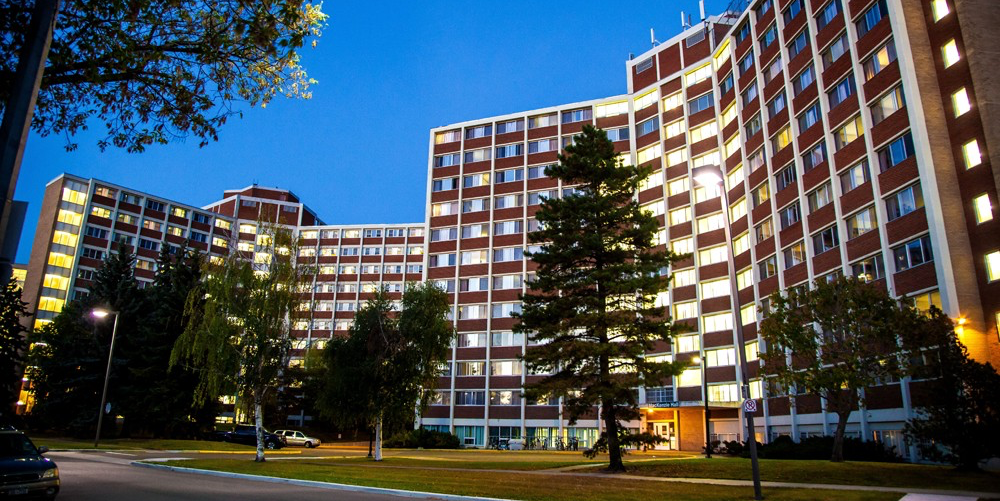 Students living at Lister Centre next fall will have options to dine when they want if new meal plan fees are approved. The fee structure was endorsed Dec. 13 by UAlberta’s board finance and property committee.

Students dining at Lister Centre next fall will be able to eat as much or as little as they want with improved menu choices and during expanded hours, pending final approval of new dining program fees.

The university’s board finance and property committee endorsed a revised fee structure for “anytime dining.” The model would see students living in Lister choose one of two options for meal service, with added flexibility to eat elsewhere on campus.

The meal plan fee proposal was revised after the committee rejected an earlier draft last month. The updated model would see students pay either $4,650 a year for unlimited meal access seven days a week, or $4,285 for five days of access.

Andrew Sharman, vice-president of facilities and operations, said the new two-tiered approach represents a compromise between student concerns over cost and flexibility and a need for financial sustainability. Ultimately, any meal plan has to provide students with access to quality food at an affordable cost, he said.

“The two-tiered approach gives students and families cost certainty—they know how much to budget for food for the entire year,” Sharman said. “Students won’t have to worry about how much money they have left on their meal plan. And they won’t have to choose between topping up their balance or going without, something that happens far too often with the current model.”

Sharman explained the two price options give students more flexibility. Those who depend on meals at Lister every day of the week can choose the seven-day plan; the five-day version accommodates students who want to dine off campus or return home on weekends.

“We went back and we did our research and we consulted with universities across Canada and we’ve come back with this two-tiered level,” Dolores March, director of hospitality services, told the committee.

The alternative put before the board, the status quo, would have seen the declining balance model continue with students preloading a debit card at one of two price points, $4,782 or $4,317. Those rates represent a five per cent year-over-year increase—a result of inflation driving up food costs, along with other cost pressures such as the provincial carbon levy and higher minimum wage.

“I would suggest we can’t afford not to proceed,” Sharman said of the two-tiered anytime dining option.

Sharman said his team heard and responded to criticisms from students that anytime dining isn’t accessible for students who might not have time to return to Lister for a meal during classes. The seven-day fee structure includes $400 worth of so-called “flex” spending—dollars that can be spent elsewhere on campus. The five-day model includes $300 worth of flex.

An earlier report to the committee noted student satisfaction with Lister dining services scores much lower than at Augustana Campus, which already uses an anytime dining model. Sharman said this level of dissatisfaction can’t be ignored, explaining that anytime dining would give the university and its food service provider, Aramark, better cost certainty in terms of numbers of diners, which in turn would reduce food waste and improve quality, selection and nutritional value.

Sharman said this impact cannot be understated as ancillary services operates on a cost-recovery basis. The improved margins from anytime dining would be reinvested over time to help pay for $6 million in improvements to student facilities such as a modernization in CAB and upgrades to the five-decade-old Lister Centre.

“Students want flexibility at the end of the day. They’ve been saying this for months now,” said Rahman.

March pointed out to committee members that the university had in fact been consulting with students for many months. She also said she had personally talked to students who found it hard to make ends meet under the declining balance program.

Sharman acknowledged the timelines were tight, but said delaying until the new year wasn’t an option because first-year students applying to the U of A need to know what it will cost to live in residence.

Vice-president of finance and administration Gitta Kulczycki reminded her fellow committee members that ancillary services doesn’t qualify for infrastructure grant funding and that operating costs can’t be offset through revenue from tuition.

“We have a problem. We aren’t able to run deficits in ancillary,” she said, right before the vote.

After the meeting, Sharman committed to further dialogue with students and Aramark to improve food quality and menu choices. He put the same commitment in writing in an earlier letter to the Students’ Union.

“Obviously, more work needs to be done but we’re prepared to work with students and Aramark to address long-standing issues of quality, variety, choice and nutrition. Our number one priority is to provide students with the best possible residence experience and dining services is a major part of that.”

The university’s board of governors will formally vote on whether to approve the new fee structure at a meeting this Friday.