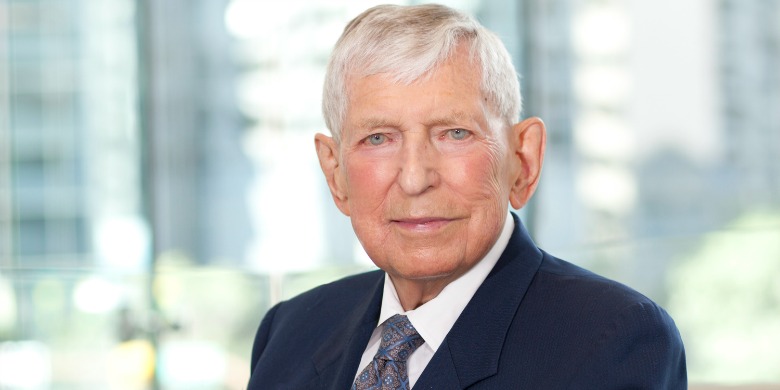 (Edmonton) The University of Alberta community is mourning the passing of a business leader and pioneer who made one of the most significant discoveries in the history of Alberta’s energy industry.

Arne Nielsen, a native Albertan and U of A alumnus, passed away July 2 at the age of 87.

Born in 1925 to Danish parents who settled in the farming village of Standard, about 100 kilometres east of Calgary, Nielsen would remain closely connected with Calgary throughout his life.

After serving in the Canadian Army during the Second World War, Nielsen attended the U of A, where he earned his Honours BSc in geology in 1948 and his MSc in 1950.

Soon after graduating, Nielsen was hired by Socony-Vacuum Exploration Ltd., which later became Mobil Oil Canada. In 1953, the young geologist led a team of oil explorers who discovered the Pembina oilfield near Drayton Valley, Alberta. Pembina turned out to be the largest oilfield in Canada and sparked a development boom in the area.

Nielsen worked his way up in the company, becoming chief geologist in 1959 before heading to the United States to serve in senior management roles that took him to New York, Denver and Austin. He came back to Calgary in 1966 as vice-president of exploration and became the first Canadian president of Mobil Oil Canada a year later. In 1972, he was part of Canada’s first energy trade delegation to China.

Nielsen was also a generous benefactor to numerous charities, serving as an executive fundraiser for organizations including the United Way, the Council for Canadian Unity and the Cerebral Palsy Foundation.

Nielsen never forgot the value of his education, and his family has a strong connection to the U of A. He and his wife Evelyn had seven children (Allan, Brian, Dianne, Robin, Gerry, Paul and Kent) before her death in 1975. He eventually remarried and had two more children with wife Valerie: Aksel in 1982 and Harry in 1986. Five of the nine children have earned a total of nine degrees at the U of A, and Brian is a professor emeritus in the Faculty of Physical Education and Recreation.

In 2000, receiving an honorary doctor of science degree from his alma mater, Nielsen said, “I do not agree with those individuals who casually regard a university education as something only needed to get a job. Certainly in my case . . . the tremendous knowledge imparted by a university education was instrumental in the achievement which followed over a lifetime."

Nielsen published his memoir, We Gambled Everything: The Life and Times of an Oilman, through the U of A Press in November 2012. The book won the Petroleum History Society’s Book of the Year Award and has since been a regular feature on the Calgary Herald bestseller list.