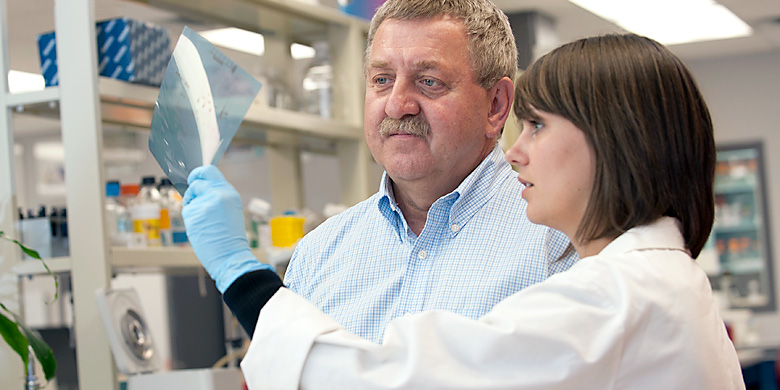 120927-marekmichalak-banner
Marek Michalak is the winner of the 2012 University Cup, the U of A's highest academic honour, in recognition of his lifelong achievements in teaching, research and community service. (Photo: Richard Siemens)

(Edmonton) For Marek Michalak, the joy of teaching and the excitement of research are wrapped up in his students.

As the 2012 winner of the University Cup, the University of Alberta’s highest academic honour, Michalak measures success largely by what his students achieve in the lab and the discoveries they share with him. The University Cup pays tribute to Michalak’s combined lifelong achievements in teaching, research and community service, but for him, it all comes back to the heartbeat of his lab—collaboration.

“It’s so rewarding to make a discovery, and you see the young people grow … every student I have, by the fourth year, is better than I am,” Michalak says. “You are only as good as your people; they make the discovery, all I do is support them.”

Michalak is among outstanding faculty, staff and students being honoured at the annual Celebrate! Teaching, Learning and Research event being held Sept. 27.

He is immensely proud of the 27 post-doctoral fellows, 17 graduate students and 53 summer students he has mentored since joining the U of A’s Faculty of Medicine & Dentistry in 1987 as an associate professor and researcher in molecular medicine.

Since then, Michalak and his beloved teams of “young people” have, over the years, explored the frontiers of molecular cell biochemistry as well as cardiovascular and multiple sclerosis (MS) research. Just last year, he and one of his PhD students, Allison Kraus, earned national recognition for breakthroughs in MS research.

In his view, Michalak learns as much from his students as they do from him.

“They create a dynamic environment, they bring new ideas and they come from a variety of disciplines and countries.” Independent, well-travelled and in step with all the latest research literature, they energize Michalak, who, as a researcher, is as impressive as his students.

His lab has drawn $24 million in research funding to date, he has published more than 200 academic papers, and he is a leader in research training and discovery in molecular cell biochemistry as well as in cardiovascular and MS research. His awards list is long and distinguished, including Fellow of the Royal Society of Canada and two honours he holds dear: Distinguished University Professor (awarded in 2011 by the U of A), and the Excellence in Mentoring Award from the U of A Faculty of Medicine & Dentistry.

Michalak, who grew up in Poland, fell in love with science as an undergrad at the University of Warsaw.

“I realized how much I enjoyed the ‘search’ part of research, and protein biochemistry was always my favourite subject.” Higher education was important to the family; his father was an engineer, his sister majored in chemistry. Michalak earned a master’s degree and then a PhD in biochemistry in Poland before coming to Canada and the University of Toronto.

After three years there, Michalak made the jump to the U of A, a move he calls “one of the best decisions I made in my life. The University of Alberta has one of the best departments in biochemistry in the world. There is a lot of support for basic research in Alberta.”

Devoting his focus to protein-folding diseases such as Alzheimer’s, MS and cystic fibrosis, Michalak and his team of students probe the mysteries of how to manipulate molecules to slow the progression of these degenerative ailments. The team also studies cardiovascular failure and how the connections between the brain and the body work.

He became a full professor in 1994 and, feeling compelled “to help influence the future of the department,” served as chair of the Department of Biochemistry from 2004 to 2009. Michalak then became vice-dean of research, an appointment that runs to 2014. Instrumental in organizing key conferences, working with the Heart and Stroke Foundation and with the Canadian Institutes of Health Research, Michalak strives to ensure his team’s work strengthens the U of A’s reputation. “The whole lab has been an ambassador for the U of A nationally and internationally.”

Michalak is proud to receive the University Cup. “It’s a huge honour, but I should be thanking the university for what it has done for me. The lab and the people are here because of the support we have here.

“Hopefully we are doing something that matters.”