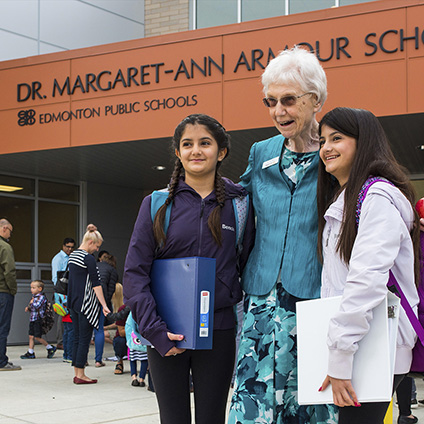 Among the numerous awards and honours Margaret-Ann Armour received in recognition of her dedication to science and technology education, a school in Edmonton was named after her in 2016. She attended every first day of a new school year to greet students with hugs, handshakes and words of encouragement. (Photo: John Ulan)

Margaret-Ann Armour dedicated her life and career to diversity and the advancement of women in the sciences. 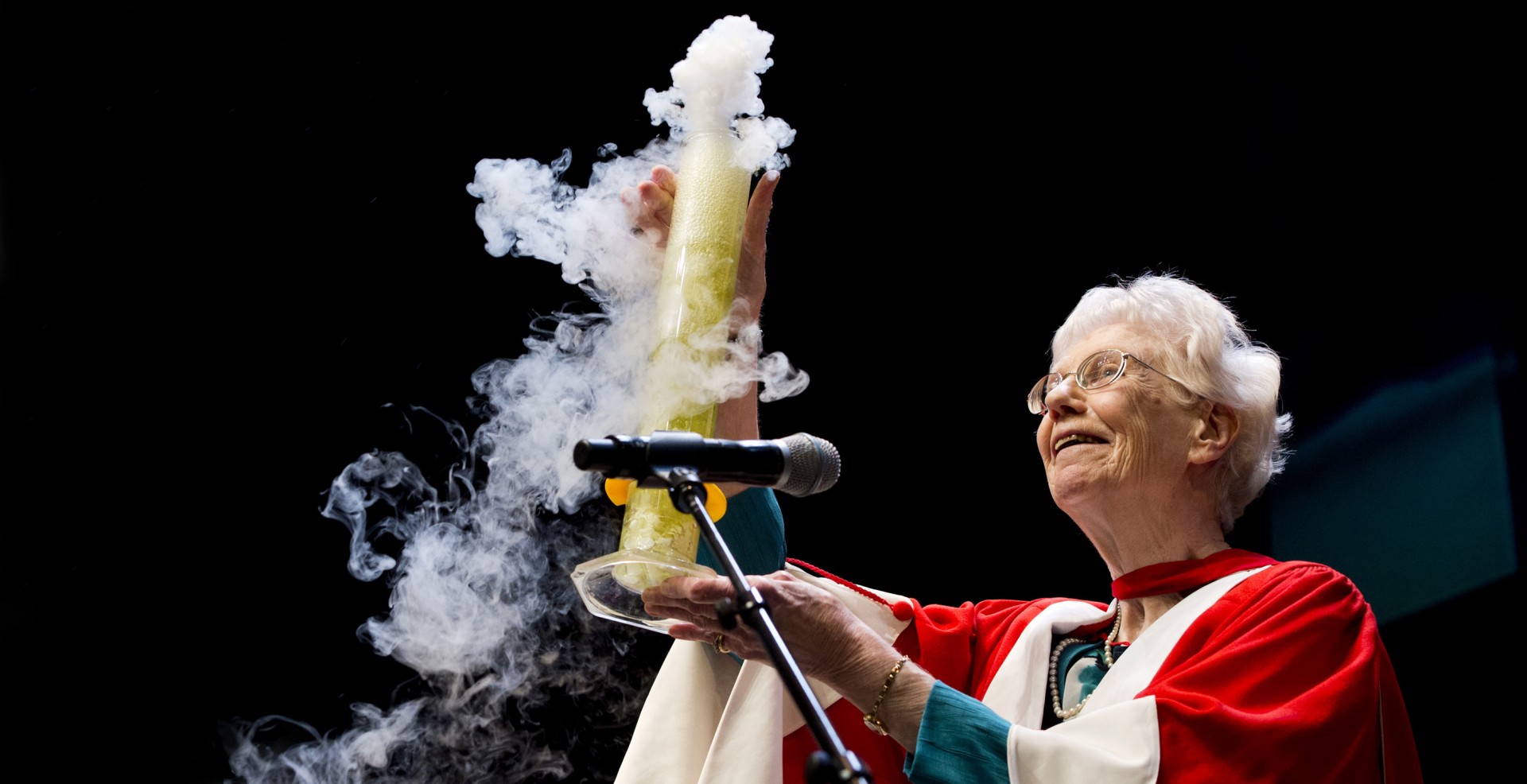 Margaret-Ann Armour was passionate about science. She tirelessly advocated for and encouraged women to pursue careers in the sciences. (Photo: John Ulan)

By BEV BETKOWSKI and JENNIFER-ANNE PASCOE

Margaret-Ann Armour, a beloved University of Alberta professor who helped blaze a trail for female scientists, died yesterday. She was 79.

Co-founder of the Women in Scholarship, Engineering, Science and Technology program (WISEST), Armour became an ambassador for women in the sciences field over a career that spanned four decades.

“I will miss her wise counsel and friendship and, on behalf of the university, I offer my sincere condolences to all her family and friends.”

Born in Scotland, Armour earned her first two degrees at Edinburgh University and worked as a research chemist in the papermaking industry for five years before coming to the U of A, where she earned a PhD in organic chemistry in 1970.

Hired in 1979 as the assistant chair in the Department of Chemistry, Armour then became one of the few female instructors in the Faculty of Science. She was asked, in 1982, to lead a committee to explore how to increase the number of women in science.

It resulted in the creation of WISEST, a program she helped launch that encourages women to take on non-traditional roles in the fields of science, technology, engineering and mathematics (STEM).

WISEST established several initiatives over the years, including a summer research program for high school students and assorted conferences for girls from Grade 6 to high school. As part of that, Armour delighted in sharing her love of science with youth and was known for her fun-filled presentations to schoolchildren featuring frozen bananas and puffs of smoke.

“I think it’s important that students in elementary school discover that science can be fun, that it relates to their lives,” she said. “That makes them realize science is not strange stuff, it’s stuff that they benefit from every day.”

Over the years, Armour became a recognized leader in raising national awareness among school-aged girls, educators, parents and employers of the importance of encouraging women to take up careers in science and engineering.

She often recalled her own childhood experience with chemistry, baking cookies as a five-year-old with her mother. She always wondered how the raw dough turned into something tasty: “What’s going on in the oven?”

WISEST was an important stepping stone for young women, Armour believed, and one of her greatest joys was to mentor them. One of the WISEST initiatives was a summer research program that saw young women work in university labs.

“Their commitment to science is greater if they’ve been part of the summer research program,” Armour said. “They’re more likely not to drop out at the end of first year, to finish their first degree, to go on into graduate school, and stay in science and engineering.

“I feel as if I am playing often a grandmother role even more than a parent role in their lives, and that’s very special.”

With her soft Scottish burr and nurturing ways, she endeared herself to hundreds of students over the course of her career.

“Margaret-Ann was a guiding light and fervent supporter of women in STEM, influencing countless people with her quiet humility and sincere interest in others,” recounted Fervone Goings, Team Lead of WISEST. “She often encouraged us to dream big and to ‘do science as if people mattered.’ Her ethos permeates WISEST and her legacy will continue to have an impact for years to come.”

For her dedication to science and technology education, and leadership as a mentor and role model for women, Armour received widespread national and international recognition, including an honorary degree conferred only the day before her passing by the Concordia University of Edmonton.

In September 2016, the 600-student Dr. Margaret-Ann Armour School opened in Edmonton’s southwest. Reflecting on the honour at the time, Armour said, “I want kids to have fun with science. That’s what keeps them interested.”

Since the school’s opening, she was on hand for the first day of class each September, doing her best to greet every single student with hugs, handshakes and words of encouragement.

She was named to the Order of Canada in 2006 and was a 3M Teaching Fellow, Canada’s premier award for undergraduate teaching. She received a Governor General’s Award in Commemoration of the Persons Case, a landmark decision in 1929 that declared women to be persons under the British North America Act.

Armour was recognized with the Montreal Medal from the Chemical Institute of Canada and served as the founding president of the board of the Canadian Centre for Women in Science, Engineering, Trades and Technology. In 2007, she was named a Champion of Public Education by the Learning Partnership. Later that year, she also received the Alberta Science and Technology Leadership Awards Foundation Special Award.

Armour was twice named one of the top 100 most powerful women in Canada by the Women’s Executive Network and received an Innovator Award at the 2011 APEC Summit on Women in the Economy.

In 2005, she was named associate dean of diversity in the U of A's Faculty of Science—the first position of its kind on campus. She remained in that position until the end, having played a significant role in helping increase the percentage of women in faculty positions from 14 to 22.

“Many of us know of Margaret-Ann’s tremendous accomplishments in teaching, and particularly the profound impact she had on young women who were considering vocations in the science and engineering fields,” said Frank Marsiglio, interim dean of the Faculty of Science. “She influenced STEM in innumerable ways.

“To me, however, her greatest influence was felt most because she was just herself—someone who had a passion for science—and her enthusiasm was infectious whenever she engaged with young people about topics in science. She accomplished many great things, but first and foremost, she was a wonderful human being who thought about others before thinking about herself, and this is what I will remember most about her.”