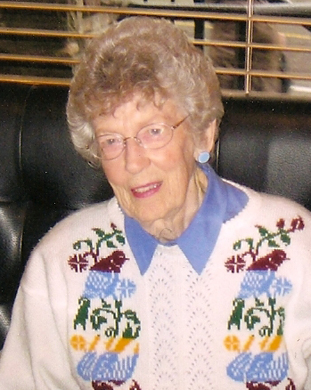 (Edmonton) The University of Alberta community, as well as human ecologists and nutritionists past and present, were deeply saddened by the passing of Elizabeth Empey on Nov. 22. She was 95.

Empey, a former dean of the Faculty of Home Economics, completed her normal school education in Edmonton in 1937 and received a teaching certificate in 1940. Following her BSc in household economics from the U of A in 1943, she completed her dietetic internship in commercial dietetics at the T. Eaton Company in Toronto in 1944.  Returning to the U of A, she then became the dietitian in charge of providing meals to students in the three university residences: Pembina (for women), Athabasca and Assiniboine (for men).

However, her desire to pursue further education soon led her to Cornell University in New York, where she completed both her master of nutritional science and PhD in nutrition in 1956 and 1959 respectively. Back at the U of A in 1959, Empey was appointed director of the School of Household Economics. In 1976, when the school became the Faculty of Home Economics, Empey served as the faculty's first dean.

One of Empey's major legacies was to expand the school's degree offerings. In 1960, household economics was a three-year program. As the school's director, Empey put forth new recommendations and received approval to offer three four-year programs: one in food and nutrition, one in clothing and textiles and one in family studies. The introduction of these programs meant that many new academic and non-academic staff members were hired; it also substantially increased student enrollment. Because of this newfound growth, Empey spearheaded the proposal for a larger, more modern facility, and in 1965 the new Household Economics building was opened.

Empey’s leadership as both director and dean was stellar, but with each success, she reached further. For instance, the introduction of graduate programs also began during Empey’s term as dean. When she began in 1960, there were approximately 67 students and four faculty members in the School of Household Economics. By the end of her deanship in 1976, Home Economics was a faculty with 374 undergraduates, 23 graduate students and 24 full-time staff members.

Empey, a wonderful mentor to many, especially young leaders in the field of home economics, routinely encouraged PhD completion and inspired faculty with a master’s degree to work on doctoral degrees.

Over the course of her career, Empey received many awards. An elected member of the Honorary Society of Phi Kappa Pi, a recipient of the Queen’s Silver Jubilee Medal and of the Award for Outstanding Achievement in Dietetics, her service to the profession and community locally, nationally and internationally was extensive.

Although she retired in 1978 and subsequently moved to Victoria, she retained strong ties to the U of A, and she enjoyed full membership in the Alberta Home Economics Association, and in 2010 was award the organization’s lifetime achievement award. In 1988, to honour her many contributions to the profession of home economics and nutrition, the Faculty of Home Economics founded the Empey Lecture (now in its 25th year), an annual public talk delivered on a topic related to family studies, clothing and textiles, or nutrition.

Known as “Beth” by her close friends and colleagues, Empey was a fun-loving and warm person who cared deeply for others. She was known on many occasions to show her thoughtfulness to staff, sometimes by showing up at the door of new faculty members bearing welcoming gifts. An accomplished pianist, she hosted many social gatherings for academic staff at her Windsor Park home and helped to foster dynamic and long-lasting relationships.