University mourns passing of Sandy Mactaggart, philanthropist and generous U of A supporter

Former chancellor strove to highlight university’s place in the community. 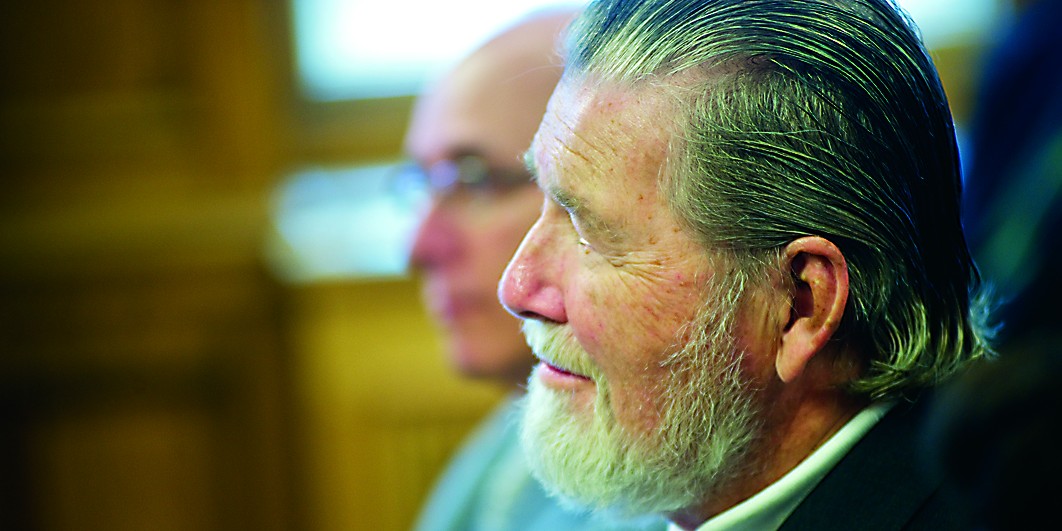 Sandy Mactaggart's extensive service to the U of A includes a term as the university's 14th chancellor and a decade with the board of governors. (File photo)
MacTaggart Gift Announcement

Sandy Mactaggart, former chancellor and a generous supporter of the University of Alberta, died yesterday. He was 89.

Mactaggart, a retired developer and philanthropist, and his wife Cécile, made many contributions to the U of A as citizens and donors. The Mactaggarts' gifts, combined with matching funds generated from government, equalled an unprecedented $100 million for the university.

“The University of Alberta has lost a giant in our community,” said David H. Turpin, UAlberta president. “In addition to visionary philanthropic gifts that have enriched many areas of the university and enhanced the international reputation of the university, Sandy Mactaggart also gave us exceptional gifts of time, vision and expertise as a chancellor, board member and leader of several other key committees. For nearly four decades, he has been one of the U of A’s greatest friends and supporters and we deeply mourn his loss.”

Mactaggart served four years as the university’s 14th chancellor and chair of the university senate from 1990-94, and spent 10 years serving on the U of A board of governors starting in 1983, including six months as interim board chair beginning in 1993. He also chaired the University's Real Estate Advisory Committee and served as the first chair of the University of Alberta Foundation. During this time, together with the province, he donated the 257-acre Mactaggart Nature Sanctuary to the university and the City of Edmonton.

In serving as chancellor, Mactaggart said he strove to highlight the university’s place in the greater community.

Mactaggart’s years of service were marked by other remarkably generous bestowments to the U of A, including their Edmonton home, called Soaring, donated to the university in 2010. This was preceded in 2005 by a world-class collection of more than 700 Chinese artifacts which Mactaggart and his wife Cécile donated to the university; a gift worth $37 million which was matched in cash by the Alberta government, leading to the establishment of the U of A’s China Institute. The institute and the Mactaggart Collection are key to promoting research, institutional partnerships, cultural exchanges and understanding.

Giving time and money to the university was an important way to support the broader community, Mactaggart told Folio, the university’s newspaper in 2010.

“Cécile and I were always convinced that the University of Alberta could become the internationally recognized university it has become—a place of respected learning and discovery, a place of culture—and in doing so help build the city of Edmonton itself,” he said.

Mactaggart was born in Scotland and was evacuated to Canada during the Second World War. In 1950, he graduated from Harvard College with a BA in architecture, followed by an MBA from Harvard Business School. That same year, he came to Edmonton where he incorporated Maclab Enterprises Ltd., a property development and venture capital company.

Besides the U of A, Mactaggart also contributed to the greater community. A strong supporter of the arts, he was one of the founders of the Citadel Theatre, Edmonton's first professional theatre, and he served on the boards of numerous organizations, including the Art Gallery of Alberta.

#DYK the Mactaggart Collection was collected for over 40 years by Drs. Sandy & Cécile Mactaggart before being donated to #UAlberta! pic.twitter.com/w7wqg2qwuY

In 1997, Mactaggart was appointed an Officer of the Order of Canada and received the James L. Fisher Award for Distinguished Service to Education from the Washington D.C.-based Council for Advancement and Support of Education. He also received an honorary degree from the U of A in 1990.

As well, the Sandy Mactaggart Award was established for undergraduate or graduate students at the U of A to assist them in undertaking study abroad for one or more semesters in Asia.

University mourns passing of Sandy Mactaggart, philanthropist and generous U of A supporter