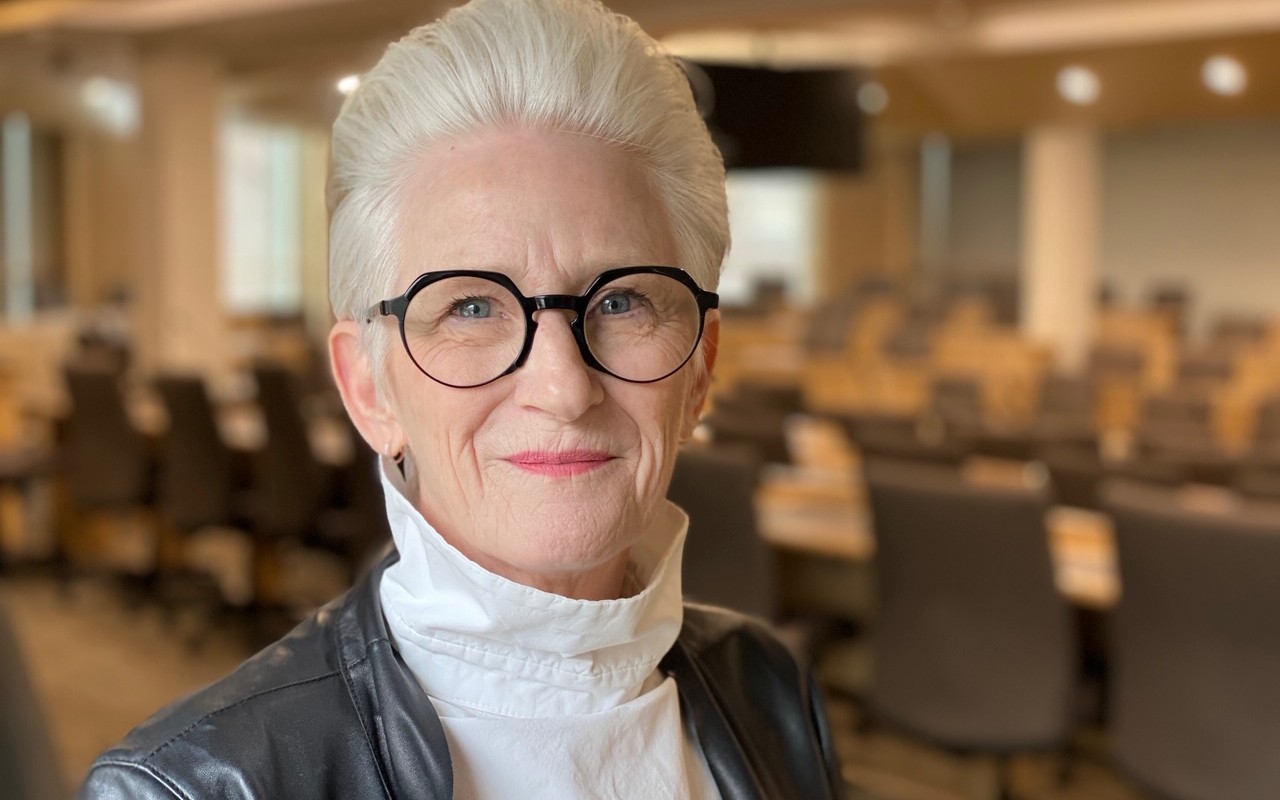 Peggy Garritty was elected as the U of A's 22nd chancellor for a four-year term beginning June 18, 2020. (Photo: Michelle Hagen)

By MICHEL PROULX and MICHAEL BROWN

An independent business owner and strategic communicator who was ATB Financial’s chief reputation and brand officer for a decade will serve as the University of Alberta’s 22nd chancellor.

Peggy Garritty was elected by members of the University of Alberta Senate to succeed Douglas Stollery. She will begin her four-year, non-renewable term after she is installed as chancellor during the last spring convocation ceremony June 18.

“I’m absolutely thrilled to be chancellor of the University of Alberta, to be in a position where I can connect the university to the community and in turn, represent community views to the university,” said Garritty, who earned both an undergraduate degree and a master of arts in sociology from the U of A.

“The University of Alberta is a special place for me. It formed and informed so much of the person I am today—the career I’ve pursued, the values I hold, my passion for constantly learning and my love of this community.”

U of A president David Turpin said he was delighted by the senate’s choice and was the first to congratulate Garritty on her election as the university’s next chancellor.

“With her passion for education, combined with her exceptional skills as a communicator and community advocate, she will be an outstanding leader and ambassador for the University of Alberta, deepening our engagement with communities in the city, around the province and across the country,” said Turpin.

From 1993 to 2008, Garritty was the owner and president of her own communications company, PG Communications Ltd., providing strategic communications advice to numerous clients across Alberta. After leading ATB Financial’s reputation and brand team as a member of the financial institution’s corporate leadership team for a decade, she returned to PG Communications in 2018.

A passionate advocate for the arts, Garritty serves on a number of boards, including for the Winspear Centre and the Art Gallery of Alberta, and has worked with a number of municipal and charitable organizations, including as an advisory board member of the Children’s Wish Foundation.

Her interest in serving her alma mater was sparked at a pub in London during a visit with a dear friend who was studying at Oxford. Their reminiscing turned to a conversation about people to nominate to be the U of A’s next chancellor.

“A lot of names of great people were popping through our minds, and then she turned to me and she said, ‘What about you?’” said Garritty.

“I was quite taken aback by that and humbled by it, of course, but then the more I thought about it and the more we talked about it, I kind of shifted from ‘why me?’ to ‘why not me?’” she said.

Garritty said it is probably more important now than ever for Edmontonians and Albertans to really understand the value of the university and how important post-secondary education is to the future of the province and the world.

“I honestly believe that the best hope for Alberta's future is to have the best post-secondary system and the best-educated people in the world,” she said. “That is the path towards a thriving economy, a compassionate society and a sustainable environment.

“So if there is a role that I can play—as a communicator, as a bridge builder, as a messenger, as a listener—that's a role I'd be happy to play.”

The chancellor is the ceremonial head of the U of A.

In addition to chairing the senate, whose mission it is to “inquire about any matter that might benefit the university and enhance its position in the community,” the chancellor serves as a member of the board of governors and represents the university at ceremonial occasions. The chancellor presides over all degree-conferring ceremonies of the university (such as convocation) and confers degrees upon the recipients.

The chancellor is an unpaid volunteer position in which it is expected she will spend 75 to 125 days engaged with the U of A and out in the community.

“I say this a lot, but I think it's important just to show up, to be in communities listening to people and then taking their issues and aspirations back to the university,” said Garritty.

“With that in mind, I see my role as a bridging role, helping to make the connection between the university and the community as tight as possible.”