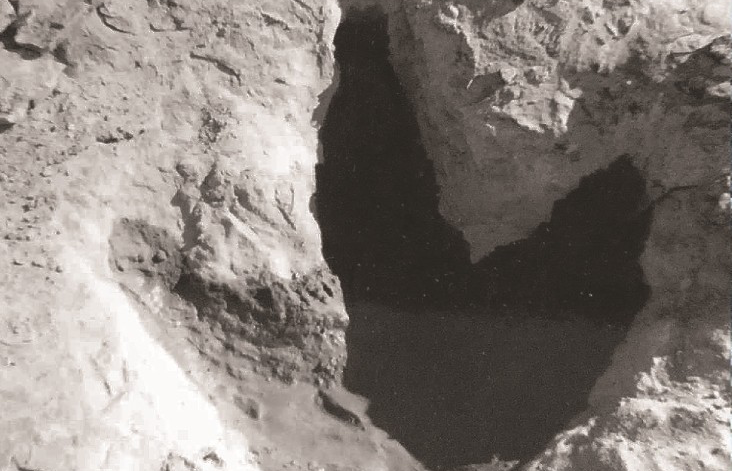 Just outside the tiny town of Glenrock, Wyoming, the footprints of a 66 million-year-old monster are cemented in stone. This fossil trackway was brought to light with the help of University of Alberta paleontologist Scott Persons, who first viewed the tracks as a 13-year-old while visiting the Glenrock Paleon Museum.

“The Paleon is an unusual place. It’s not a big museum, but it doesn’t have to be because it’s got the badlands for a backyard,” explains Persons. The working museum has dinosaurs on display but also provides opportunities to experience paleontology in action. “Before Glenrock, for me paleontology was dinosaurs in books and their skeletons in display halls and behind glass cases. This was the first time I got my hands dirty in the field and in a fossil preparation laboratory.”

The museum’s curator, Sean Smith, showed Scott another first: the fossil tracks of a tyrannosaur.

“Sean led me out to a sandstone slope and started brushing away at an indented spot. At first, it looked like a prehistoric pothole,” Persons recalls. “But soon, I could see the imprints of three big toes, each with sharp claw tips. It was so cool my jaw dropped. Then, Sean pointed up slope, and there were two more!”

The Glenrock tracks, as it turns out, are one of a kind. Years after his initial visit to the Paleon, Persons—now a doctoral student in paleontology—reached out to the museum and urged them to pursue formal scientific description of the trackway. With his help, a research paper on the rare footprints has just been published in the peer-reviewed journal Cretaceous Research.

Based on the sharp claws and other traits, such as the imprint of a small fourth claw at the rear of the best track, the footprints can be definitively identified as those of a carnivorous dinosaur—a big one. Given the trackway’s age and geography, the only candidate for the prints’ maker is a species of tyrannosaurid.

“The tracks are just a bit too small to belong to a full-grown Tyrannosaurus rex,” Persons explains. “But they could very well be the tracks of an adolescent T. rex, or they could belong to the closely related smaller tyrannosaur Nanotyrannus. We really can’t say which.”

Either way, the tracks are unique. Though isolated tyrannosaur footprints have been found before, the Glenrock trackway is only the second multi-step tyrannosaur track site known to science, and the first to belong to T. rex or Nanotyrannus.

“Having a trail of tracks is important,” says Persons. “With it, you can calculate an estimate of how fast the tyrannosaur was walking.” That estimation, between 4.5 and eight kilometres per hour, puts the tyrannosaur at a slow trot and confirms—contrary to some previous speculation—that tyrannosaurs were no slower than many other large carnivorous dinosaurs. It also shows that, even when walking, tyrannosaurs moved faster and covered more ground in a single step than the large herbivores, such as the duck-billed dinosaurs, that they coexisted with and presumably hunted.

The tyrannosaur tracks are expected to help put Glenrock and its museum on the map. To help preserve a record of the tracks, casts of the footprints have also been made and are on public display in the museum.

“The tracks are still in the field,” says Persons. “If you go to Glenrock, visit the Paleon Museum and are up for a little hike, you can see the prints just like I did.”