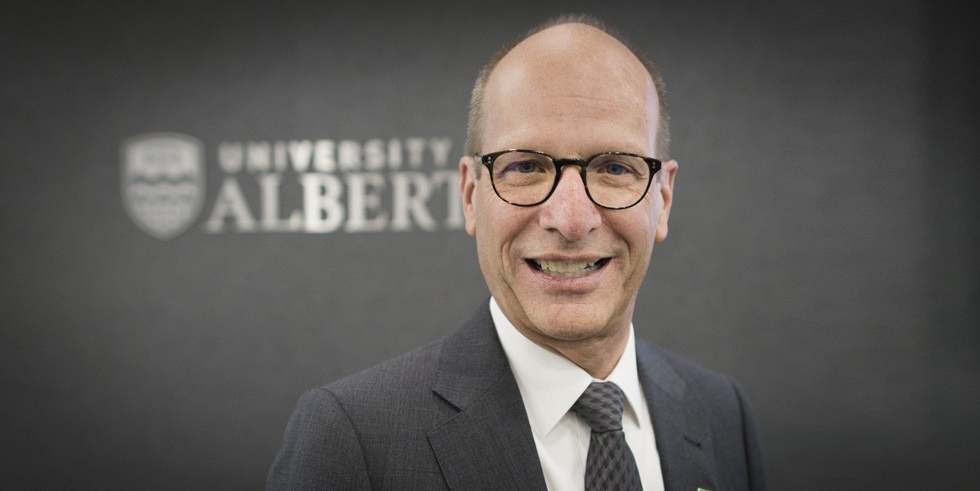 A respected lawyer, community builder and philanthropist, who is known for his commitment to social justice and humanitarianism locally, nationally and internationally, has been elected by the University of Alberta Senate to be the institution’s next chancellor.

Douglas R. Stollery, who retired from PCL Constructors Inc. in 2013 and now serves as a community volunteer as well as counsel to Reynolds Mirth Richards & Farmer LLP, will begin his four-year term in June. Stollery succeeds current chancellor Ralph Young.

Stollery says that his lifelong involvement with post-secondary institutions as a student, lecturer, volunteer fundraiser, institute director, adviser, governor and current chancellor of St. Stephen’s College, has taught him, both personally and professionally, how universities are among the most important institutions in our society and, in this world of rapid change, are becoming increasingly essential.

“At an individual level, universities offer students from all walks of life and backgrounds the opportunity to realize their human potential by developing their knowledge and advancing their ability and desire to become lifelong learners,” Stollery said. “At the societal level, universities are among our most important catalytic engines for transformation and change … especially as citizens increasingly look to universities not just as places of knowledge, but also as leaders for the public good, endeavouring to understand and answer some of our most pressing societal questions.

“I am honoured to have been elected chancellor, and I look forward to assisting the university in carrying forward its founding mission to ‘uplift the whole people.’”

Chancellor-elect Doug Stollery talks about the importance of the University of Alberta's teaching and research, and what he hopes to achieve as chancellor.

As noted in the many letters of support for his nomination, Stollery has demonstrated proficiency in the areas of human rights and constitutional law, and has a deep commitment to social justice and humanitarianism while also being a leader in construction law and corporate commercial law.

He has been a pillar of the Edmonton community, contributing his time and personal resources to a number of different sectors. “He has a deep sense of social conscience coupled with a formidable business mind. He is keenly aware of the human condition and the importance for people to have the resources to meet the necessities of life with dignity, but also to have the educational and other opportunities necessary to thrive.”

According to U of A president David H. Turpin, “Douglas Stollery’s extensive post-secondary involvement and understanding of the vital role of universities in society, combined with his human rights work, his outstanding personal contributions and his tireless community involvement, make him an ideal chancellor and a perfect fit for our institution. I look forward to working with him in his role as chancellor to move the University of Alberta forward, and ultimately help build a better community, a better province and a better Canada.”

Stollery earned an LLB from the University of Alberta in 1976, and an LLM from Harvard Law School in 1980.

From 2006 to his retirement in 2013, he was general counsel to PCL Constructors Inc., member of the board of directors of PCL Construction Holdings Ltd. and corporate secretary to the PCL family of companies. From 1982 to 2006, he was a partner with Reynolds Mirth Richards & Farmer LLP, where he focused on construction law, real estate law, corporate and commercial law, and constitutional law.

His many accomplishments include pro bono work leading to a Supreme Court of Canada landmark human rights decision that has been recognized as one of the “Top 10” Canadian Charter of Rights and Freedoms decisions by a 2007 panel of experts in jurisprudence, convened by co-chairs of Osgoode Hall’s Constitutional Cases Conference.

Stollery has served as a sessional lecturer in the faculties of law, business and extension at the U of A, a member of the Faculty of Law Advisory Committee, a director of the Alberta Law Reform Institute, and a donor and volunteer fundraiser.

His service to the legal profession and community at large has been extensive. He has served in a number of capacities on the Canadian Bar Association, including president of the Alberta branch. He has also been a director of the Legal Education Society of Alberta.

He is currently president of the Stollery Charitable Foundation, member of the boards of directors of CARE Canada and The Stephen Lewis Foundation, and a member of the advisory committee on The Future of Construction Report for the World Economic Forum. He has been president of the Victoria School Foundation for the Arts, director of Edmonton 2001 World Championships in Athletics, a volunteer with AIDS-Free World, and vice-chair of the board of governors for Grant MacEwan College, now MacEwan University.

Lieutenant Governor Lois E. Mitchell will install Stollery as chancellor at the 3 p.m. convocation ceremony on June 15, 2016, in the Northern Alberta Jubilee Auditorium. In keeping with tradition, Stollery will give the keynote address as the newly installed chancellor.