President David Turpin calls on other Canadian universities and colleges to do the same. 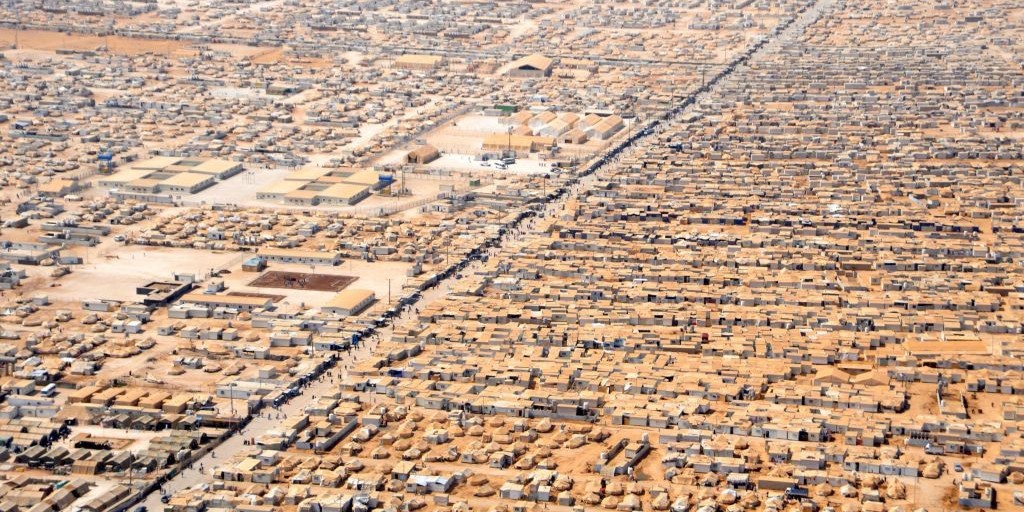 An aerial view of the Zaatari camp for displaced Syrians in Jordan (Photo: U.S. Department of State; licensed under public domain via Commons)

(Edmonton) The University of Alberta today announced the creation of an award designed to provide support for students affected by the conflict in Syria. The President’s Award for Refugees and Displaced Persons will cover tuition and living costs for up to 10 undergraduate or graduate Syrian students, admitted to the U of A as early as January 2016.

“Last week we were all reminded of the enormity of the Syrian refugee tragedy,” said U of A President David Turpin. “Our university has been engaged in programs that support refugees for a number of years, but we want to do more. With today’s announcement, we are also inviting other universities and colleges to join us with similar initiatives of their own.”

Turpin says he recognizes that creating a new award that provides financial support for 10 students throughout their academic program may seem “small in light of the scale of the problem.”

“But every individual who is given a way out and offered a different, brighter future becomes part of a changing story,” he said. “I look forward to seeing the impact Canadian universities can have when working together to help hundreds of young people who, through no fault of their own, have had their lives upended.”

Turpin indicated that this new awards program can be adapted for students from other countries in future, should the need arise, and spoke to what he sees as important historical context.

“We can never forget that our community—and indeed our country—have been built, in part, on wave after wave of immigrant refugees from around the world who found themselves displaced from their homelands. The people of Edmonton and Canada have stood together to help our fellow global citizens in the past and we will do so again.”

Presidents of the U of A’s graduate and undergraduate student associations support the university’s decision to offer assistance to Syrian students.

"Our first president indicated that ‘the uplifting of the whole people’ be our final goal, and this initiative achieves exactly that. I am a proud U of A student knowing that our community is doing what we can for displaced Syrian people," said Navneet Khinda, president of the University of Alberta Students’ Union.

Colin More, president of the Graduate Students’ Association, said, “The Graduate Students' Association fully supports this initiative to help individuals displaced by the horrible events in Syria. We hope the university will extend the program to other graduate students in the broader war-torn region who have been similarly affected.”

To be eligible for the President’s Award for Refugees and Displaced Persons, applicants must be Syrian citizens with satisfactory academic standing who have been admitted to begin studies in a U of A degree program in or after January 2016. The students can be entering any year of an undergraduate or graduate degree at the U of A, and the award is renewable, normally, for up to 48 months, depending on the program of study. Space in a university residence will also be guaranteed.

In addition to this new award that will be administered by the Office of the Registrar, the U of A has a long-standing Student Refugee Program operated through the student-led local committee of the World University Service of Canada (WUSC). In 2014, that program marked its 25th anniversary at the U of A. Turpin is currently the chair of WUSC’s board of directors, having taken on that role earlier this year. WUSC recently launched a fundraising campaign in support of student refugees and today called upon the leaders of post-secondary education institutions across Canada to increase their support to Syrian refugees through the Student Refugee Program.

The university also works with the Institute of International Education (IIE) Scholar Rescue Fund to offer scholars who are at personal risk in various parts of the world a one-year placement at the U of A, that is extendable to two years. Abdul Al-Shehabi, an advanced scholar of aerospace engineering from Syria, came to the Faculty of Engineering under the program in fall 2014. A second Syrian scholar, Ghada Bachour, arrived in Edmonton this past Friday and will join the Faculty of Pharmacy and Pharmaceutical Sciences. The IIE is a U.S.-based not-for-profit organization committed to international education and training. Since 2002, it has assisted more than 610 scholars from 53 countries, placing them at over 325 host partner institutions in 40 countries around the world.