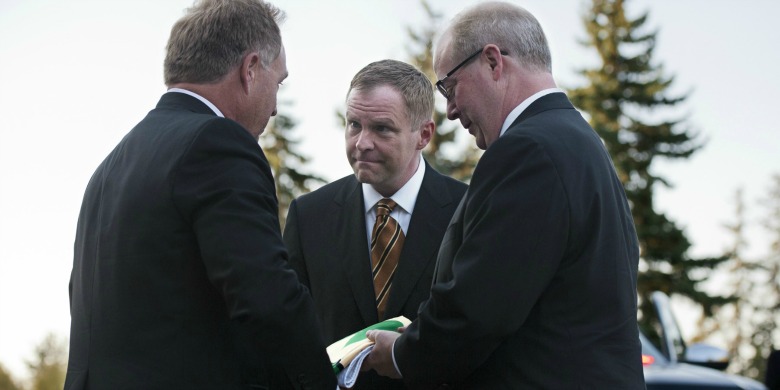 120919-lougheed03-banner
(From left) U of A board chair Douglas Goss presents a university flag to Peter Lougheed's sons Joe and Stephen as the former premier's funeral procession pauses at Rutherford house on its way out of Edmonton Sept. 18. (Photo: John Ulan)

(Edmonton) A mournful trumpet call filled the air Tuesday evening as Peter Lougheed made his final stop at the University of Alberta.

U of A dignitaries, alumni, students, and former and current members of Lougheed’s fraternity, Delta Upsilon, gathered at the entrance to Rutherford House as the hearse bearing Alberta’s most beloved premier and one of the U of A’s most distinguished alumni passed by.

Lougheed, 84, died Sept. 13 and lay in state earlier this week at the Alberta Legislature before his body is returned to Calgary for burial.

Lougheed, who will be given a state funeral Sept. 21, lived in Rutherford House during his time as a student. The stately home once served as the living quarters for Delta Upsilon.

As the Delta Upsilon flag fluttered from an upper balcony, a young trumpeter and current member of the fraternity played the "Last Post" and the "Rouse" as a poignant farewell to Lougheed during the brief stop at Rutherford House.

U of A board chairman Doug Goss stepped forward to offer condolences to Lougheed’s sons, Joseph and Stephen, presenting them with a university flag to honour their father. In turn, the U of A archives will be receiving Lougheed’s class ring.

“Peter Lougheed is a giant among the U of A’s thousands of extraordinary alumni,” said President Indira Samarasekera, paying tribute to the former Alberta premier through the university blog.

Along with the lasting impact of his luminous and visionary career in Alberta politics, Lougheed also left a legacy for his alma mater.

“His enduring affection for and commitment to the U of A has always been evident to me, whether he was speaking at special university events or congratulating the latest recipients of the prestigious Peter Lougheed Scholarship,” Samarasekera said.

“His gifts to this university and to generations of U of A students will continue to live on for years to come.”

Lougheed’s enduring connection to the university began when he enrolled as a student in the late 1940s, earning a bachelor of arts in 1951 and a law degree in 1952. During his busy career as a student, he took an active role in campus life and culture, and as an athlete.

Lougheed served as president of the U of A Students’ Union from 1951 to 1952, started sports reporting in the late 1940s for The Gateway, then became sports editor from 1950 to 1951. Hand-in-hand with his job as a writer, he took to the field and played football for the Golden Bears in 1947 and 1948, a precursor to his later years as an Edmonton Eskimo.

Even as he moved on to a distinguished career in governance that would forge Alberta’s pivotal role as an oil and gas province, Lougheed’s links to the U of A continued with the establishment of the Peter Lougheed Scholarships in 1986, reflecting his own love for campus involvement. Each year, the scholarships are awarded to undergraduate students who are leaders in university life, community organizations or cultural activities.

Lougheed’s own lifelong accomplishments have been proudly recognized throughout the years by the U of A.

He was awarded an honorary doctor of laws degree in 1986 for contributions to Alberta and Canada, and named to the U of A Sports Wall of Fame in 1987. In 1994, he received a Distinguished Alumni Award, the U of A’s most prestigious award.

He continued to support the U of A in later years, attending signature events that mirrored the university’s own milestones, including celebratory Alumni Weekends and the centenary of The Gateway in 2010, where he was keynote speaker.

His many contributions both on and off campus can serve as inspiration to U of A students and future alumni, Samarasekera said.

“His dedication to public service, in politics and beyond, will always remain a powerful model for all current and future U of A students who strive, as he once did, to be a leader and a force for positive change within society.”

People are invited to share their memories and photos of Lougheed and his legacy on the U of A Alumni Facebook page.

Honouring Lougheed: A discussion with the former premier

In 2008, the U of A's centenary year, Peter Lougheed sat down with former board chair Jim Edwards to discuss his achievements as Alberta's premier and his long involvement with the university.