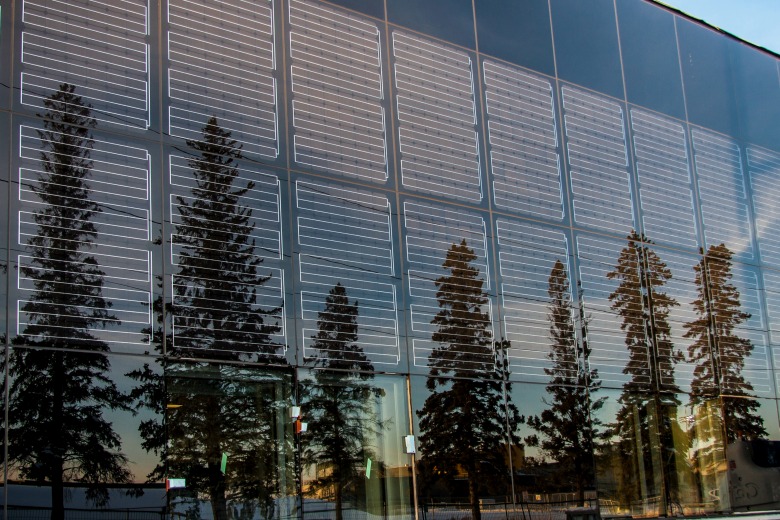 140422-solar-cyclotron-banner
The building-integrated solar array in the Medical Isotope and Cyclotron Facility was one of the first to be installed in Canada.

(Edmonton) World-class sustainability researchers at the University of Alberta deserve a campus that models leading-edge sustainability practices. The university will soon do just that when it unveils the largest portfolio of renewable energy generation in Canada’s post-secondary sector.

“Instead of using fossil fuels for power and heat, we will generate clean energy with solar-electric and solar-thermal panels,” said Michael Versteege, manager of Energy Management and Sustainable Operations and one of the principal champions for renewable energy on campus.

Solar-electric installations are already completed or under construction on four buildings, including a record-breaking solar array on Augustana Campus. As part of the university’s Envision energy-saving initiative, another half-dozen renewable energy projects will be built over the next three years.

Power from all sides

The Camrose Performing Arts Centre on Augustana Campus is the current jewel in the U of A’s renewable energy portfolio. Incorporating 488 modules, it is the largest solar-electric system of its kind in Canada. It is projected to produce up to 150 megawatt-hours of electricity per year—enough power for about 5,000 laptop computers—saving as much as $10,000 in annual utility bills when the centre opens this fall.

The centre’s designers gave it another distinctive feature by putting solar panels on all four sides of the theatre’s 70-foot-tall fly tower. This presents a research opportunity for faculty and students interested in renewable energy. “There was no added cost, and we don’t really know how much energy can be produced by north-facing solar panels in an Alberta winter,” said Versteege.

As a leading research university, the U of A should incorporate these kinds of groundbreaking elements into its renewable energy infrastructure, Versteege says. “We know there will be sunlight reflecting off the snow. So we’ll get to experiment to see just how much electricity really can be generated with our north-facing panels.”

Energy at the heart of campus

The Physical Activity and Wellness Centre—currently under construction—will place a host of green technologies on display right at the heart of campus life. The new fitness facility is pursuing top green-building certification under Green Globes, based partly on its renewable energy generation.

In addition to solar-electric generation, the PAW Centre’s purpose allows it to use the sun’s energy in a simple and effective way. A solar-thermal system will capture the sun’s rays to preheat the recreational complex’s hot water supply.

“Residential buildings generally need most of their hot water at night, when the sun is already down,” said Versteege. But recreational facilities, like the PAW Centre, have the opposite need.

“The gym complex has huge shower demand during the day. Plus we've got a couple of heated swimming pools in there. It’s really an ideal location for solar-thermal.”

This push for renewables began in 2013, when the Medical Isotope and Cyclotron Facility opened with the university’s first solar-electric array. Like the one in the Performing Arts Centre, this was a building-integrated solar array, one of the very first to be installed in Canada.

“It was a custom-manufactured design, which made it a really exciting project for everyone involved. I think it really helped spur on development for more renewables on campus,” said Versteege.

As a measure of the importance of renewables, signature buildings aren’t the only ones being considered. The R.E. Phillips building is a service depot tucked away behind the Lister residence, but it will soon have a 12-kilowatt solar installation feeding into the campus grid.

“Renewable energy is something everyone can support because it’s an investment in the university’s long-term self-sufficiency. Plus, by reducing the need to rely on fossil fuels, renewables shrink our contribution to climate change,” said Versteege.

These four solar-electric projects are all scheduled for completion by the end of 2014, and the university has many more projects in the design stage. Under these plans, the new Innovation Centre for Engineering and its existing neighbours will soon receive up to 250 kilowatts of solar power capacity.

“This is what makes it so exciting to be working for sustainability on campus.”

Learn more about sustainable energy at the U of A