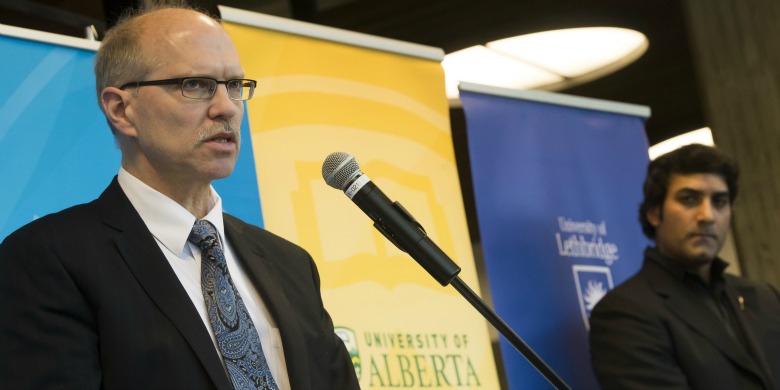 130116-mh-frankrobinson-banner
UAlberta dean of students Frank Robinson speaks during the Jan. 16 announcement of $3M in provincial funding for mental health initiatives at the university. Stephen Khan (right), minister of enterprise and advanced education, was on hand for the announcement. (Photo: John Ulan)

(Edmonton) The University of Alberta is helping students succeed academically by expanding programs and services that help students cope with stress, depression and other mental health issues.

A new $3-million grant from the Government of Alberta will allow the university to address long wait times for clinical mental health services and find other ways to reach students in the campus community, said Frank Robinson, vice-provost and dean of students.

“We can actually think about more people, different hours of service, working with students in places outside a clinical setting, perhaps in a residence or their faculty office,” Robinson said. “It will make it easier for students to access services and lessen the stigma of seeking help from a place they’re not familiar with.”

The funding was announced Jan. 16 by Health Minister Fred Horne, who unveiled a total of $10.5 million over three years for mental health initiatives at Alberta’s post-secondary institutions.

Robinson said there’s plenty of academic research—including the 2011 National College Health Assessment and Healthy Minds studies completed by the U of A—that links mental health and student academic success. The research showed that 66 per cent of dropouts were related to mental health issues.

“By expanding our programs and services, not only are we helping students feel better, we’re preventing crisis and we’re helping our students succeed and reach their full potential,” said Robinson.

The funding will allow the university to hire additional psychologists and psychiatric nurses at the Mental Health Centre run by University Wellness Services, and expand early intervention outreach in the campus community. The university will also help students cope with stress by expanding the free yoga sessions, healthy snacks and pet therapy offered by Unwind Your Mind, run by the Health and Wellness Team (HaWT).

Robinson credited university colleagues such as Donna Cave, physician and director of University Wellness Services, for laying the groundwork for the funding announcement. He said it was Cave who broached the issue of mental health program funding needs with Horne, and later worked with the provincial government to ensure a sustainable model was put into action.

Cave said University Wellness Services will immediately increase crisis counselling resources by placing psychologists in faculty offices and among high-needs student groups, with extra social workers on the ground. Health promotion will also be a major focus with a ramped-up Unwind Your Mind, which will run more often and in more locations.

“This is a true stab at population health from the grassroots. It is initiatives at every level of the mental health platform,” Cave said. “We’re going to have better crisis services, better availability to serve people before they come into crisis, and early-intervention and primary prevention initiatives, which have never been done on post-secondary campuses in Alberta to this extent.”

Adam Sartore joined HaWT last year as a volunteer health educator after experiencing his own brush with anxiety and isolation due to course demands when he first entered the biological sciences program.

“All my friends were busy, so I really didn’t find a lot of people to rely on and I felt I just had to push through on my own, that it was normal to feel this anxiety,” he said.

Now in his fourth year, Sartore and HaWT help their peers cope with similar feelings, work that can be as simple as handing out healthy snacks to stressed students during exam time—and often leads to surprised faces and positive reactions, he adds.

“It’s normal for other students to feel a great amount of stress, but that’s where groups like HaWT come in to say, yes, stress is normal but you don’t have to face it alone.”

Robin Everall, a psychologist with the Office of the Dean of Students who is coming off a year-long appointment as provost’s fellow for student mental health, said all these efforts to advance post-secondary mental health supports firmly establish the U of A as a leader.

“When we look at resources available here and what we’re beginning, we’re setting a trail for other institutions to follow,” said Everall. “We have been very thoughtful and have consulted students about what their needs are so that we can put into place structures that not only fit with the institution, but also fit with meeting student need, where the students are.”