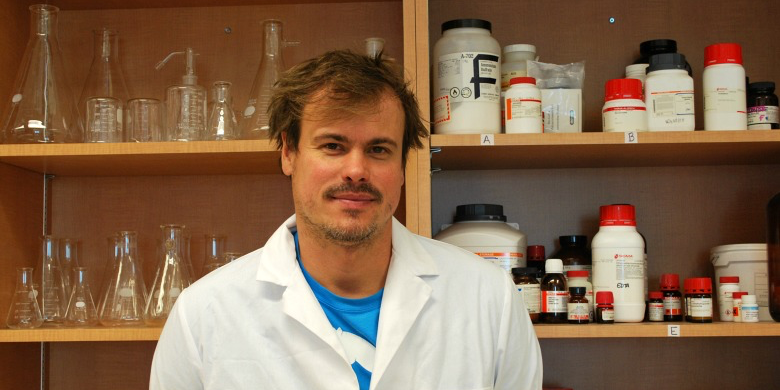 By MICHEL PROULX and KATE BLACK

(Edmonton) A newly appointed provincial research chair at the University of Alberta will examine the relationship between gut bacteria and human health.

Jens Walter was recently appointed the Campus Alberta Innovates Program (CAIP) Chair in Nutrition, Microbes and Gastrointestinal Health. His position is a joint appointment between the Faculty of Agricultural, Life and Environmental Sciences and the Faculty of Science.

Walter is bringing two research programs with him to the U of A. The first will examine the symbiotic relationship between gut microbes and their host, and explore the evolutionary processes that have shaped this partnership. The second looks to identify how diet affects the microbial communities in the gut and their consequences on human health.

Walter notes that the connection between gut bacteria and overall health is already a hot topic in medical research, with animal models showing that irregularities in these bacterial populations contributes to health problems such as obesity and autoimmune disorders. He’s excited to bridge the gap between these animal models and human applications through his two developing programs at the university.

“We have good evidence that an aberrant microbiome contributes to important diseases, and this clearly warrants research on the use of dietary strategies that are designed to redress balances.”

Walter estimates the projects will take about a year to develop before beginning the research, and anticipates he will eventually design dietary strategies to target gut bacteria.

Walter’s past research has been mainly concerned with the microbial ecology of the human and animal gastrointestinal tract, and the metabolic and immunological interactions between the microbiome and its host in relation to health.

Walter is one of several Campus Alberta Innovates Program chairs to be hosted by the University of Alberta. The $6-million program was created in 2011 by the provincial government to recruit new research leaders to Alberta in food and nutrition, energy and the environment, neuroscience and prions, and water.